In October of 1994, when Karl was just turning two, he was diagnosed with a rare cancer called Wilms Tumor. He fought his cancer for three years. He had surgeries to remove three tumors and he also underwent chemotherapy and radiation treatments. Karl had a God-given character that allowed him to find good in bad and bring joy and comfort to those around him.

The “Karl Tourney” had its beginnings in 1998, just one year after Karl died. It’s founder, Lance Pogones, began the tournament with the support of friends and family. The Karl Potach Foundation was then established to enable proceeds from the golf tournament, and money from private donations to be used to benefit cancer patients and their families.

The money raised during the Karl Potach Memorial Golf Tournament funds the Karl Potach Foundation and is used to improve the quality of life for current and future pediatric cancer patients, and also work towards a cure.

Nearly $900,000 has been raised in the past 18 years by the Karl R. Potach Foundation. The 19th annual “Karl’s Tourney” golf tournament is scheduled for Monday, August 15th at Austin Country Club. Event organizers are seeking teams, sponsors and auction items and remain extremely thankful to the community for truly one of a kind support.

“Who would have thought a simple idea in 1998 would lead to nearly $900,000 being raised during 18 tourneys,” said Lance Pogones, the event’s founder and friend of Karl’s parents, Dr. Kurt and Brenda Potach.

Last year the Karl Potach Memorial Golf Tournament drew 147 golfers to the Austin Country Club, where a post-tourney dinner and auction is also held. The Hormel Institute, University of Minnesota, Children’s Cancer Research Foundation and Mayo Clinic are recipients of the funds to continue progress in researching Wilms’ tumor, a childhood cancer.

The event honors the memory of Karl Potach, the son of Kurt and Brenda, who passed away in 1997 at age 4 from a rare form of pediatric cancer called Wilms’ tumor. Wilms’ tumor most often affects children ages 3 to 4, typically occurring in one of the kidneys. Karl’s family and friends host the fundraiser to honor his memory by supporting research that through discoveries, will prevent and control cancer and extend lives.

“Our researchers have made significant discoveries in the fight against Wilms’ tumor,” Dr. Zigang Dong, executive director of The Hormel Institute said. “It shows the critical importance of funding cancer research, and we are deeply thankful to all who are involved with the Karl Tourney. Our goal is to preserve and extend lives, and we indeed commit our lives to this mission.”

“They all go above and beyond to help make the day a special remembrance of and the sparkle in his eyes drive us to go a little further and help him make an impact Karl Potach,” he said. “Karl was only with us a few short years but his spirit, his smile for generations to follow.”

To support the Karl Tourney or to register, 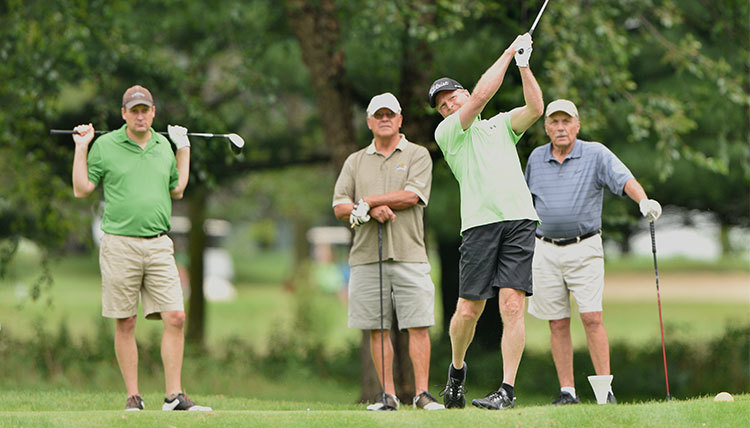