A good poster can be a conversation starter and may even help you make connections. Get some great tips for making your poster stand out from the crowd with these great tips!
Andrea Macaluso
Publisher, Nature Partner Journals, Springer Nature
Follow
Like

Stroll through a decent-sized scientific conference and you'll probably face a bewildering number of posters — many more than you could ever hope to read in one day. So you have to pick and choose. Perhaps one reminds you of the worst PowerPoint presentation you ever endured; another is crammed with thousands of words in microscopic font. But you encounter one featuring a bold illustration, splashes of color, readable text and clean lines. You pause for a closer look, chat with the presenter and discover common research interests. You've made a connection, and at least one poster has accomplished what its creator meant it to do.

The scientific poster remains a crucial currency for communication and connection, says biophysicist Anthony Salvagno, director of education for #SciFund Challenge, a non-profit organization in Santa Barbara, California, that specializes in science-communication training. Through SciFund, he co-teaches a five-week online course on poster design along with biologist Zen Faulkes of the University of Texas Rio Grande Valley in Edinburg.

Researchers now have access to an array of high-end graphics software — and the 'how to make a poster' conversation has been going on for years (see Nature 483, 113–115; 2012). But that hasn't stemmed the flow of visual clunkers. As Salvagno explains, researchers often slap posters together at the last minute instead of thinking about the best ways to deliver their message and engage their audience.

But those who have the vision — and computer skills — to avoid distracting design blunders will draw the right kind of attention to themselves, their findings and their ideas. They might even win an award (see 'Tips for making your poster stand out'), although the main goals are to publicize their science and scientific identity while forging new associations. “A good poster will help you make better connections,” Salvagno says. “Just one conversation can turn into a huge success.”

Trishna Dutta, a wildlife researcher at Columbia University in New York City who studies tigers in India, says that lessons from the poster course helped to spark productive conversations at the 2015 International Congress for Conservation Biology (ICCB) in Montpellier, France. She had signed up for the course specifically to make an impression at the conference. She also wanted to make up for past failures. “My first posters were bad,” she says. “I didn't have the aesthetic sense of what goes with what.” Worse, comments from attendees suggested that her key points were often lost, especially for those outside her speciality. “That was a case where I needed to know my audience,” she says. “People there studied everything from bacteria to elephants. I'm not sure they got my message.”

Her ICCB poster was far clearer. A subheading spelled out the take-away message of tiger migration, the text was orderly and easy to read, maps added colour as well as context, and a photo of a wild tiger near the centre captured the eye. “I still don't make excellent posters, but I'm getting the hang of it,” she says.

Anxiety about these visual presentations is widespread. When Vasco Elbrecht uploaded a set of scientific-poster tutorials onYouTube, he realized that he had underestimated the demand for such help. “I would have been happy if just a few of my friends watched them,” says the PhD student at the University of Duisburg-Essen in Germany. So far, his poster tutorials have racked up more than 31,900 views.

In his most-viewed video, Elbrecht shows examples of good and bad posters from his own repertoire. His first — about the genetics of Microbotryum fungus — was bogged down with huge swathes of text, a common pitfall. “I tried to fit everything I could on it,” he says. “But at a conference, nobody is going to stand there and read it for ten minutes.” In a later, more successful poster about the genetic diversity of the stonefly Dinocras cephalotes, he limited the text to a few hundred words — roughly the same count as an abstract (see 'A winning view'). That's generally enough to deliver a key message and entice passers-by without overwhelming them, he says. The design also helped him to win a €1,500 (US$1,660) research prize for his poster and abstract from the Institute for the Advancement of Water Quality and Water Resources Management in Essen, Germany, in 2014.

Salvagno and Faulke's poster class stresses the same point: when it comes to text, less is more. Poster-makers often already know that too much text can be off-putting, but many are still unable to resist the temptation to include practically everything they know about their subject. “When I ask people what they dislike about posters, too much text is the number-one complaint,” Salvagno says. “People hate seeing it on other people's posters, but they do it on their own.”

Of course, there's more to it than getting the right word count. Text and graphics have to flow together in a way that's as visually appealing as it is informative. That takes a designer's eye — or a willingness to copy from people who know what they are doing. Elbrecht encourages researchers to borrow elements from posters that they like. “All design is redesign,” he says. “There's no need to be original.” 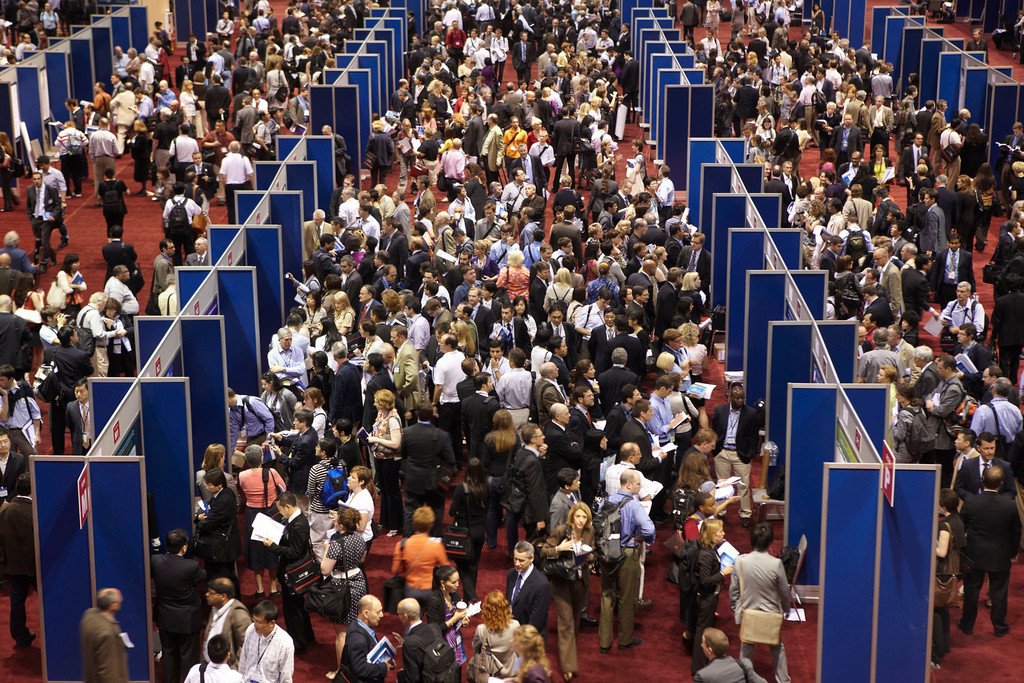 A good poster can be a conversation starter and may even help you make connections. Get some great tips for making your poster stand out from the crowd with these great tips!