The role of other tumors in breast cancer aggressiveness

While mammographic screening programs have been successful in reducing mortality from aggressive breast cancer, not every woman benefits from regular examinations. According to our results, those women are also more likely diagnosed with other tumors, either before or after breast cancer diagnosis.
Felix Grassmann
Postdoctoral Fellow, Karolinska Institutet
Follow
Liked by Ben Johnson and 1 other

Primarily, we wanted to identify novel (genetic, environmental and life-style) factors that are involved in breast cancer aggressiveness in order to identify women at risk and to shed further light on the underlying processes. We were particularly interested in risk factors for interval breast cancer, that is a breast tumor that was identified between two regularly scheduled mammographic screenings. Those tumors typically grow quite fast within the screening window to palpable size and are thus considered more aggressive with worse prognosis and survival. In contrast, those tumors that are detected at a regularly schedules mammographic screening (termed screen detected) are usually smaller and of less aggressive nature with excellent prognosis (see Figure 1).

Our initial idea was to look at women that had survived a prior tumor since we thought they would be more likely to have beneficial genetics resulting in less aggressive and therefore slower growing tumors. However, we found that cancer survivors were more likely to be diagnosed with interval compared to screen detected breast cancer. Similarly, women which survived aggressive interval breast cancer were more likely to develop another primary tumor in a different tissue. In contrast to our initial hypothesis, we now realized that the underlying factor that resulted in multiple cancer diagnoses in an individual’s lifetime was also linked to breast cancer aggressiveness.

Prior studies showed that family history of breast cancer in close relatives was more commonly reported in interval compared to screen detected patients. The underlying genetic variations that cause an increased occurrence of breast cancer in families can be attributed to either rare (and penetrant) or common (and weak) genetic changes. According to our results, though, common genetic changes are unlikely to explain the observed association. When we compared to combined genetic risk for other tumors from common variants between interval and screen detected patients, we found that interval breast cancer patients were actually at reduced genetic risk for those tumors. Therefore, rare cancer mutations are likely the cause for the occurrence of multiple tumor diagnoses in those women as well as the increased risk for interval breast cancer.

To conduct those studies, we had access to two large Swedish cohorts of breast cancer patients with a rich collection of risk factors, tumor characteristics, information on drugs and other diseases as well as accurate mammographic screening dates. We previously found that the mammographic density (i.e. the density of the breast in mammographic images) can mask small tumors and thus result in false-positive interval cancer status. Those masked tumors are not true interval cancers that grow within the screening interval but instead were missed at the prior screen and more closely resemble screen detected cancer. Therefore, we restricted our analyses to interval cancer patients which hat low dense breasts at the prior screen.

Taken together, our results showed a role of other tumors in breast cancer aggressiveness and prognosis, likely due to rare genetic changes that increased the chance for multiple tumor diagnoses in a woman’s lifetime as well as her risk for interval breast cancer. 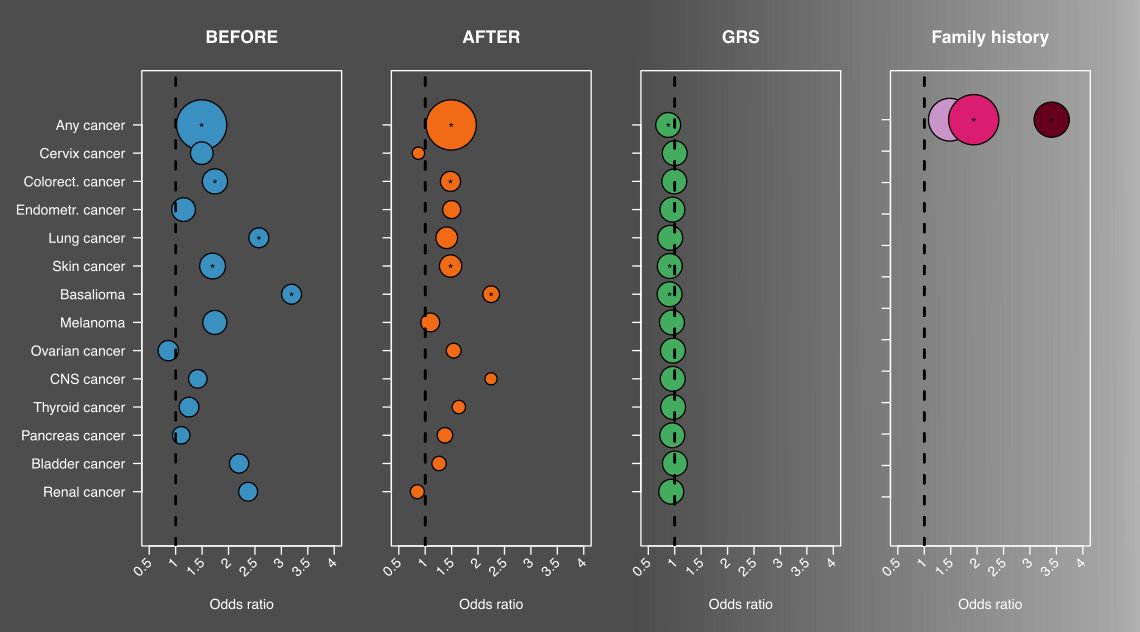 The role of other tumors in breast cancer aggressiveness

While mammographic screening programs have been successful in reducing mortality from aggressive breast cancer, not every woman benefits from regular examinations. According to our results, those women are also more likely diagnosed with other tumors, either before or after breast cancer diagnosis.