We all know that cancer immunotherapy blocking immune checkpoints results in long lasting responses in patients with multiples cancers, but it only works in a minority of cases. Data analysis of biopsies from patients who do not respond to this therapy have shown that they are mostly devoid of immune cells, in particular T cells, as if the cancer was excluding the immune system from infiltrating the tumor lesions. Therefore, we were interested in reversing resistance to immune checkpoint blockade by inhibiting ways that cancer cells exclude immune cells from tumors.

We set up to find a potential druggable target that reversed this immune cell exclusion from tumors, which we hypothesized could increase the number of patients that benefit from cancer immunotherapy. With this idea in mind, we studied and characterized the genes expressed in biopsies of a cohort of patients with metastatic melanoma treated with the anti-PD-1 antibody pembrolizumab. As expected, biopsies from patients that did not respond to therapy did not have a significant amount of T cells in the tumor microenvironment.

This observation guided us to the next question, what are the differences in gene expression between tumors that are immune infiltrated and non-immune infiltrated? The list of genes that were differentially expressed was long and hard to make sense of, but when we overlapped the genes that were overexpressed in samples with low T cell and dendritic cell we ended up with a shorter list, more manageable and easier to work with. In particular, one gene, PAK4, stood out among the other genes as it was a kinase and therefore, was potentially druggable.

Excited by the possibility of having found a potential targetable driver of immune cell exclusion, we ran to generate PAK4 KO cells using CRISPR/Cas9. We decided to use the murine melanoma cell line B16 as it is poorly immunogenic and does not respond to PD-1 blockade. The key question was: does knocking out PAK4 in B16 cells sensitize tumors to PD-1 blockade? I will never forget the day I presented during lab meeting the first results of the in vivo experiments with the B16 PAK4 KO cells… it was working! PAK4 deletion was sensitizing tumors to PD-1 blockade! Importantly, the use of a PAK4 inhibitor drug, KPT-9274, recapitulated the in vivo effects we observed in our genetic PAK4 knockouts. These experiments were the beginning of a long journey that we hope will take us to the clinic.

We then decided to figure out the mechanism whereby deleting PAK4 would increase tumor immunogenicity and sensitize tumors to PD-1 blockade. Here, we took advantage of the evidence that associated and active WNT signaling pathway with immune cell exclusion and lack of response to PD-1 blockade. Since PAK4 had a known role in regulating the WNT signaling pathway through b-catenin phosphorylation and activation, we set up several experiments to study how PAK4 deletion affected WNT signaling with the help of Wei Liu and Cun-Yu Wang at UCLA. We indeed observed that knocking out PAK4 impaired WNT signaling activation and hence, constitutes a potential explanation for the phenotype we observe in our in vivo experiments.

Overall, this project has shown us a potential solution to overcome resistance to PD-1 blockade mediated by a cancer cell-induced exclusion of immune cells. Although there is still a lot to learn about the mechanism of work we look forward to testing the combination of PAK4 inhibitors with immune checkpoint blockade in the clinic. 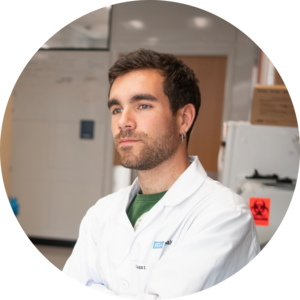