Tumour hypoxia is the level of molecular oxygen present in cancer tissue. It is a fundamental microenvironmental property of tumours, affecting cancer cells, adjacent stroma and infiltrating immune cells alike. Many studies have shown that tumours of some types are chronically hypoxic, while other tumour types are not. Even within a single tumour type, there is often a range of hypoxia across subtypes, or between different tumours of the same subtype. Indeed different regions of the same tumour can vary in their oxygen content. We previously showed how hypoxia influenced the landscape of coding point mutations and of copy number aberrations in multiple cancer types using exome-sequencing and array-based copy number profiling data. We'll come back to that study in a few minutes!

Using data from the PCAWG consortium, we evaluated the influence of tumour hypoxia on the mutational processes in 27 cancer types. We found that hypoxic tumours, independent of the cancer type, preferentially accumulate mutations of specific types. We also found that a larger fraction of the mutations in hypoxic tumours occur early, prior to subclonal diversification. This is consistent with a model where hypoxia serves as an early selective pressure, eliminating many competing subclones with only a small number successfully passing through this evolutionary bottleneck.

Consistent with the idea of an evolutionary bottleneck, hypoxic tumours are highly enriched for mutations in specific driver genes, like TP53, MYC and PTEN. The last is the most notable of these: PTEN and hypoxia are synergistically associated with poor outcome. In fact we show that tumours with both these aberrations preferentially show complex polyclonal architectures. Putting all this together, we have a model where hypoxia serves as an early evolutionary bottleneck. To survive it, cells acquire specific driver mutations, perhaps through dysregulation of specific types of DNA damage repair. Once this adaptation occurs, these new driver mutations allow an explosion of evolutionary diversity, resulting in highly lethal tumours.

This is an appealing model, and one that merits explicit testing through longitudinal profiling of tumours under surveillance and in various model systems. But perhaps the most remarkable thing about this model is its origins. It didn't primarily emerge from our complex 27 tumour-type pan-cancer modeling work. Remember that exome-sequencing study I mentioned at the beginning? As part of that study, we wanted to zoom into a cancer type that showed particularly strong associations with hypoxia, and we chose prostate cancer. We looked at the whole genomes of 177 prostate tumours, and this model emerged from that data alone.

I find this remarkable: careful studies of clinically-relevant cohorts of a single cancer type often reveal to us aspects of cancer biology that are much harder to find in large pan-cancer studies through all the variability within and between cancer types. To me, this suggests that despite the remarkable work by the PCAWG consortium, there remains an ongoing need for exhaustive studies focused on specific cancer types driven by specific clinical questions. Indeed we are likely just beginning to unravel the ways in which hypoxia shapes cancer evolution, and I look forward to studies that begin to unpack the ways hypoxia shapes the spatial variability of cancer! 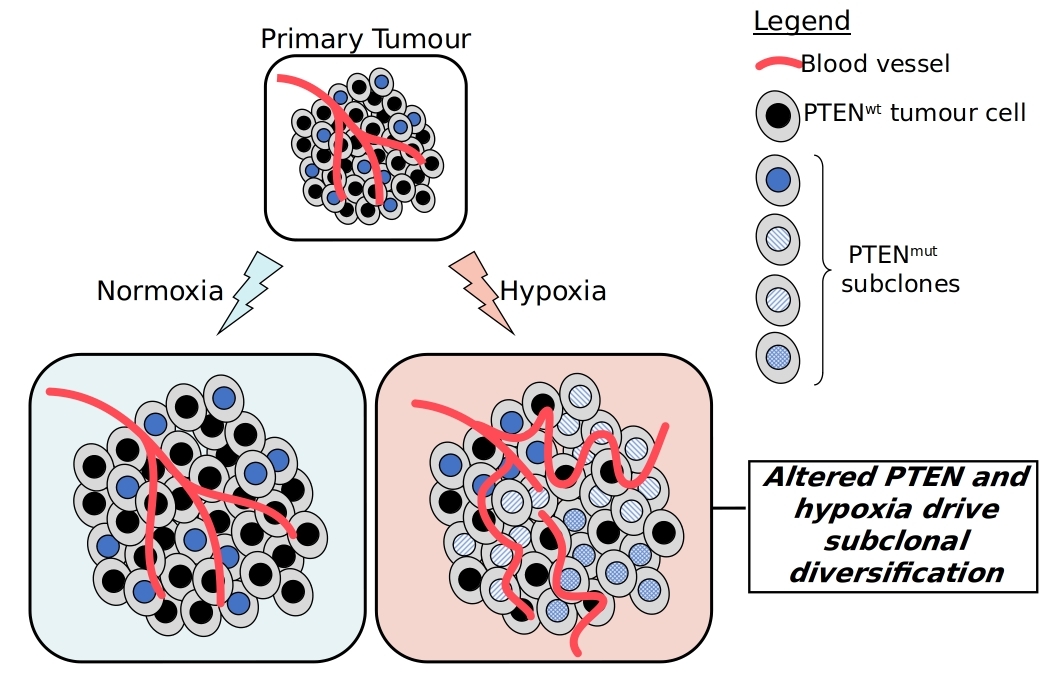 We have found that hypoxia shapes the molecular landscape of cancer, influencing driver mutations, DNA damage repair processes and tumour subclonal architecture. Surprisingly, most of these findings were observed in studies of individual cancer types.