A paper recently published by our group revealed a novel mechanism of glioblastoma suppressor gene SIX3 to be hyper-methylated through EGFR-ZNF263 axis, which hints a new mechanism of genome-wide epigenetic reprogramming in tumorigenesis.
Minghua Wu
professor, central South university
Follow
Like Liked by Zhibin Yu and 2 others

The concept of Yin and Yang comes from an ancient Chinese Taoist philosophical idea Taiji, which shows two opposing parts integrating with each other to reach the balance. Moreover, Yin and Yang are fully interdependent, and can be the cause and effect of each other. While a tumor is such a distinct “universe” that undergoes wide reprogramming during tumorigenesis, we are still working to understand how crosstalk of intracellular/extracellular events help keep the balance.

In 2011, our group published a paper (Zuping Z, 2011) that reported ectopic methylated gene candidates in human glioma samples. SIX3, known as SIX homeobox 3, is among the most differentially hypermethylated genes. SIX3 is a vital transcription factor for the central nervous system, especially for the optical nerve development. Several publications have reported its role as a tumor suppressor in breast cancer and lung cancer by restraining Wnt or Myc pathways, but its function in human glioma has not yet been determined. When we investigated its promoter, we found SIX3 has a “bivalent” promoter, which is characterized by active histone modification H3K4me3 and suppressive H3K27me3 concurrently. This property often occurs in genes that are important regulators of development, enabling them to respond to extrinsic stimuli flexibly. In this case, we confirmed SIX3 as a novel negative transcriptional regulator which acts as a tumor suppressor directly repressing the transcription of AURKA and AURKB in human glioblastoma (Zhibin Y, 2017). SIX3 helps to maintain chromatin stability during cell proliferation and differentiation.

Evidence from genome-wide methylome data shows that glioblastoma samples from different patients can be classified by DNA methylation distributions. We were curious to find out more about region-specific hypermethylation in cancer cells and wanted an answer to the question – How is SIX3 methylated in human glioblastoma? SUZ12, a PRC2 component, or DNMTs are the direct executors for epigenetic silence of SIX3, but they can’t recognize DNA sequences specifically, which means they cannot be responsible for initiating SIX3 promoter hypermethylation. You might expect transcription factors to be the leading suspect, since several groups have reported KRAB-ZNF family members are indispensable partners in oncogenes-mediated silencing of tumor suppressor genes. During the search process, we were lucky to find a gene named ZNF263, which has the highest score to bind with the core promoter region of SIX3 and belongs to the KRAB-ZNF protein family. Following an abundance of experiments, we confirmed that ZNF263 binds with SIX3 promoter, and represses SIX3 expression by recruiting HMTs/DNMTs to silence the promoter.

For sure, only ZNF263 cannot make a story, and no one have ever investigated the details of how KRAB-ZNF be regulated, and who is responsible to turn it into a “bad boy”. As our paper showed, we found overactivation of EGFR/MAPK pathway in glioblastoma led to the accumulation of ZNF263 proteins. Inhibition of EGFR/MAPK pathway with inhibitors promoted ZNF263 degradation through ubiquitin proteasome pathway. Additionally, we found ERK-D domain on ZNF263 protein, which mediates ZNF263 binding with ERK2. With all the findings and analyses, we can conclude that ZNF263 is a potential substrate of MAPKs, and phosphorylation of ZNF263 by MAPKs stabilizes ZNF263 protein, which results in the silencing of SIX3 in human glioblastoma (Zhibin Y, 2020).

Amplification and mutation of EGFR are the most frequent genetic events of glioblastoma, and other tyrosine kinase receptors or Ras mutations are also detected in patient’s samples. Ectopic activation of MAPK due to receptor mutation leads to the DNA hyper-methylation of SIX3, and reduced SIX3 expression further activates AURKA/AURKB expression, inducing chromatin instability. Chromatin instability and epigenetic abnormality are two hallmarks of a tumor, and form the basic features of malignancies. Just like the idea of Taiji, chromatin instability and epigenetic abnormality are interdependent in tumorigenesis. The crosstalk between them keeps the balance in the tumor cell, which promotes the development of the tumor. 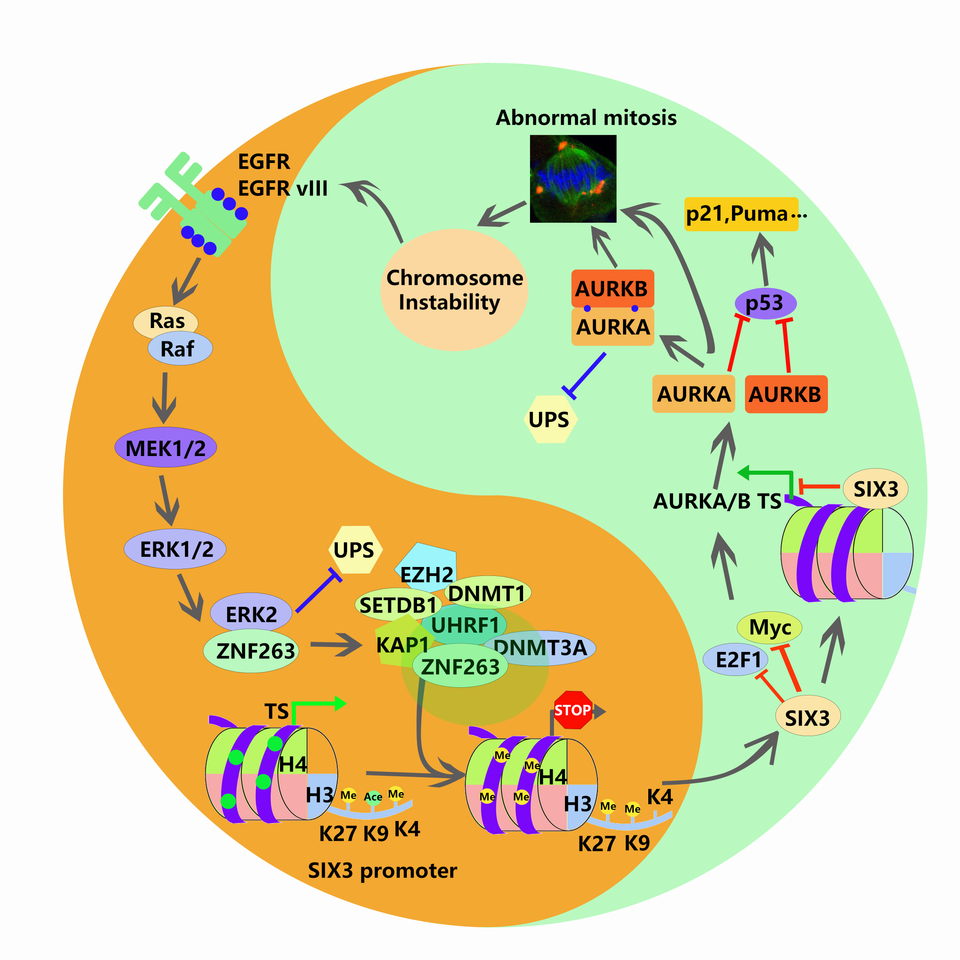 A paper recently published by our group revealed a novel mechanism of glioblastoma suppressor gene SIX3 to be hyper-methylated through EGFR-ZNF263 axis, which hints a new mechanism of genome-wide epigenetic reprogramming in tumorigenesis.