Prostate cancer is the most commonly diagnosed malignancy and the second leading cause of cancer-related death among men in the United States. African American (AA) men have the highest risk in both prostate cancer incidence and mortality, necessitating further research to address this disparity.  Age-adjusted incidence and mortality rates are roughly twice as high in AA compared with Caucasian American (CA) men. Although socio-economic status and other environmental and cultural factors may contribute to this racial disparity, emerging evidence has shown an important role of genetic and epigenetic factors in the pathogenesis of AA prostate cancer. Specifically, AA CRPC patients have shown high risk in developing distal secondary bone metastasis, which contributes to the high mortality of the diseases. Therefore, there is an urgent need to investigate the molecular mechanisms underlying prostate tumorigenesis in AA patients.

Multiple lines of scientific evidence have shown a critical role of aberrant androgen and Wnt signaling pathways in promoting AA prostate cancer initiation and progression. Specifically, the length of the polyglutamine (polyQ) tracts in the androgen receptor (AR) is inversely correlated with the risk of developing prostatecancer, age of onset, and risk of advanced diseaseat diagnosis. Intriguingly, AA men bear short polyQ tracts significantly more frequently than CA men, suggesting a potential link between the length of polyQ tracts and the pathogenesis of prostate cancer in AA men.

To recapitulate aberrant Wnt and androgen activation in human prostate cancer tumorigenesis, particularly in those aggressive diseases observed in AA men, we generated a series of novel mouse strains. In these mouse models humanized AR bearing different length polyQ tracts and stabilized beta-catenin, a key player in the Wnt signaling pathway, are co-expressed in mouse prostatic epithelia. An early onset oncogenic transformation, accelerated tumor development, and more aggressive tumor invasion phenotypes were observed in the prostates of the mice bearing short polyQ AR proteins and stabilized beta-catenin. Using RNA sequencing, chromatin immunoprecipitation (ChIP), and other in vitroand in vivoapproaches, we further identified that aberrant activation of Wnt and androgen signaling increases the expression of Myc, a bona fide oncoprotein, in prostatic tumor tissues of the above mice.  These data demonstrate a critical role of aberrant Wnt signaling in combination with short polyQ AR expression in promoting prostate cancer initiation and progression, and suggest a potential mechanism underlying the disparity in aggressive prostatic tumor development between AA and CA patients. Ongoing studies in our lab are aimed to determine the therapeutic effect of Myc inhibition in combination with androgen deprivation therapy and Wnt inhibition in the treatment of aggressive prostate cancer. 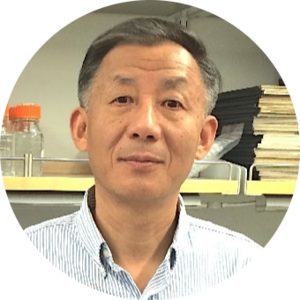 Professor and Director, City of Hope and Beckman Research Institute