Liver hepatocellular carcinoma (LIHC) is a highly heterogeneous disease associated with poor clinical outcomes. Although recent studies have identified the most frequent alterations in LIHC, there remains possibilities that additionally potential drivers could be identified with a moderate mutation frequency. Large scale genomic projects are more valuable to identify novel cancer genes, however, it has been argued by Hsiehchen et al. [1] that such a strategy may not always be efficient for the sake of meaningful patient benefit. Our previous work [2] had demonstrated that the transcriptional and translational patterns of tumor-mutated alleles may enable to prioritize personalized mutated driver genes, given that the functional effect of somatic mutations could be determined by expression at the mRNA and protein levels.

In a relatively small LIHC cohort (n=9), we identified hundreds of genes which tumor-mutated alleles were transcribed. However, how to make further prioritization in identifying novel genes underlying carcinogenesis? Potential function at the protein level, might be a signal that driver gene works. We then graphically constructed the protein-protein interaction network to identify modules of the weighted protein complexes among these genes. Hub genes were highly interconnected between nodes in a given module, as being further considered to be functionally significant. Dozens of hub genes were identified. Motivated by how these hub genes could lead to aberrant signaling pathway to enhance tumor progression, we performed functional enrichment as well as survival analyses, and an initial functional screen in vitro. Finally, VPS35 came into our attention.

Fig. 1. A proposed model depicts how VPS35 participates in the trafficking of FGFR3 and its effects in the down-stream PI3K/AKT signaling.

VPS35 - the vacuolar protein sorting 35 - is a component of the retromer complex, participating in the endosome-to-plasma membrane sorting and recycling of transmembrane receptor. We demonstrated that VPS35 promoted hepatoma cell proliferation by facilitating the G1/S transition in the cell cycle. Further validation of its oncogenic roles in vitro and in vivo showed that VPS35 contributed to the PI3K/AKT signaling through regulating the sorting and trafficking of FGFR3 (fibroblast growth factor receptor 3) (Fig. 1). Our findings provide insight into the roles of the retromer complex on carcinogenesis and have an important implication for the development of personalized therapeutic strategies for LIHC.

The reported study is only the beginning of our endeavor in exploring the oncogenic role of VPS35, and the understanding of the impact of retromer complex on carcinogenesis deserves more attention. 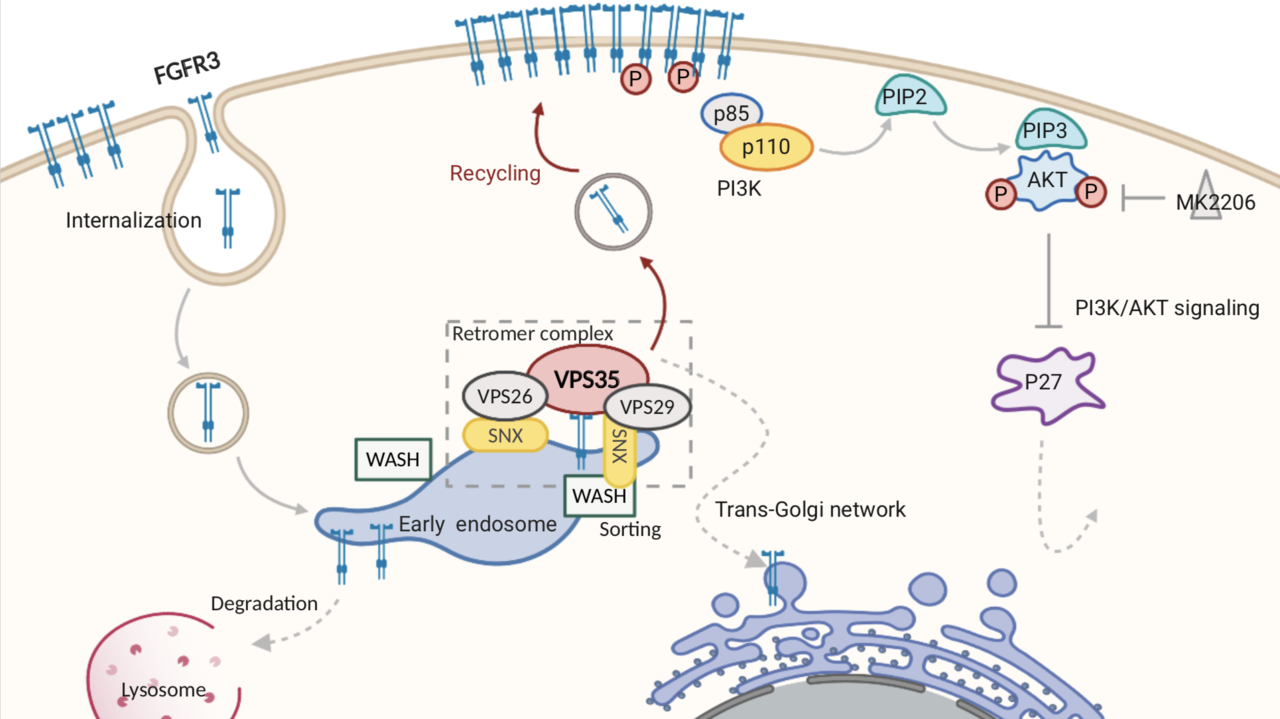 A paper recently published by our group revealed a novel oncogene VPS35 (the vacuolar protein sorting 35) implicated in liver hepatocellular carcinoma, which regulated the PI3K/AKT signaling through regulating the sorting and trafficking of FGFR3 (fibroblast growth factor receptor 3).