If cancer treatment were an arcade game, T cells with their shoot-em-up behavior would be Space Invaders, and chimeric antigen receptor-redirected (CAR) T cells would be a next generation Space Invader with high-powered precision weapons. In 2014, we put our heads together to think about how to make macrophages, the Pacman of the immune system, eat cancer cells on demand. Macrophages exhibit several features that make them a potentially powerful tool in the fight against cancer. They are the most abundant immune cell found in most solid tumor microenvironments (TMEs) and can traffic to and infiltrate tumors with greater efficiency than other immune cells. They are partly responsible for the  anti-tumor activity of commonly-used monoclonal antibodies such as rituximab and trastuzumab. They secrete a variety of pro-inflammatory cytokines and chemokines that can help orchestrate an immune response, and after phagocytosing cancer cells, they can function as antigen-presenting cells and thereby stimulate an adaptive immune response.

Normally, the tumor subverts infiltrating macrophages into immunosuppressive cells referred to as tumor associated macrophages, or TAMs, which typically have anti-inflammatory pro-tumoral functions. A key to the success of recruiting macrophages to fight the tumor rather than do its bidding is by instilling in the macrophages the power to resist its siren song.

To do this, we had to learn how to genetically engineer human macrophages with CARs to direct their phagocytic activity against tumors. It turned out that human macrophages are intrinsically resistant to commonly used viral vectors. Ultimately, we found a chimeric adenoviral vector called Ad5f35 that overcomes the inherent resistance of primary human macrophages to genetic manipulation and imparts a sustained pro-inflammatory M1 phenotype onto the cells. We were able to transduce human macrophages with an anti-HER2 CAR with high efficiency (>75%), and these CAR macrophages (CAR-Ms) demonstrated antigen-specific phagocytosis and tumor clearance in vitro and in vivo. Not only that, but we found that CAR-Ms produce a myriad of pro-inflammatory cytokines and chemokines, convert bystander immunosuppressive M2 macrophages to an inflammatory M1 phenotype, activate and mature dendritic cells, recruit resting and activated T cells, and present tumor derived intracellular antigens to T cells.  Importantly, these M1 CAR-M resisted the effects of immunosuppressive cytokines, immunosuppressive cells, and maintained their M1 phenotype in a humanized TME.

In recent years, it has become clear that CAR T cells are very good at killing hematologic malignancies (for example, B-cell acute lymphoid leukemia and B-cell non-Hodgkin lymphomas) in patients but they have a hard time against solid tumors.  As we were developing this technology, we were eager to apply genetically-modified macrophages to the treatment of advanced solid tumors. In order to do this, we started a biotech company in order to develop and refine the technology, expand its utility, scale up the manufacturing under GMP standards, and ultimately to conduct a first-in-human study of genetically engineered macrophages. The company, Carisma Therapeutics, is based in Philadelphia and is gearing up for a Phase I clinical trial with CT-0508, an anti-HER2 CAR macrophage, in patients with relapsed/refractory HER2 over-expressing cancers.

Our record holder - a CAR-M (red) that has eaten at least 15 green tumor cells:

For more information, our Nature Biotechnology paper can be found here. 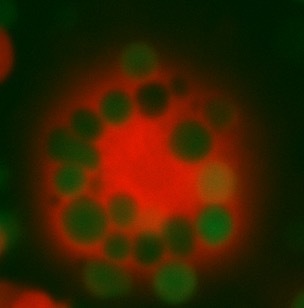 By Michael Klichinsky and Saar Gill