We use cookies to ensure the functionality of our website, to personalize content and advertising, to provide social media features, and to analyze our traffic. If you allow us to do so, we also inform our social media, advertising and analysis partners about your use of our website. You can decide…

Poorly differentiated pleomorphic sarcomas are characterized by very complex genetics and are highly heterogeneous between and within tumors. Each individual tumor is therefore constituted of various genomes. We started this study with the objective to describe new mechanisms associated with metastatic spreading, following the hypothesis that the distinct cells within a tumor have various and synergistic biological properties able to cooperate to accomplish the first metastatic steps (i.e. angiogenesis, tissue invasiveness and embolization). Metastasis will then develop from one single cell among all those that reached the circulation, being able to grow in a totally new organ, a new microenvironment. To test this model, we used two distinct (at the genomic and transcriptomic levels) cell lines originating from the same pleomorphic sarcoma. These cell lines were labeled with two different dyes (fluorescent protein expression after stable transfection: DsRed (red) and GFP (green)) mixed and co-cultured into the same flask to study how they would cooperate. But, after three days, we observed rare red and green cells indicating spontaneous fusion events between cells from both cell lines. After a long (1.5 years) and strong validation (different sarcoma cell lines in different conditions, with different labelling) of this totally unexpected and surprising observation, we decided to deeply study this uncommon, but original mechanism, in order to clarify its role in sarcoma evolution (Clic "Read the paper" for the video showing the first mitosis upon fusion).

Cell fusion is a fundamental mechanism that operates from fertilization to placentation, cell differentiation and tissue repair1–3. For instance, hybrid cells between hematopoietic and epithelial or mesenchymal cells (Purkinje neurons, hepatocytes, cardiomyocytes, skeletal muscle cells and intestine stem cells) have been frequently spotted following tissue injury2,4–6. Cell-to-cell fusion occurs when the plasma membrane of two adjacent cells merge and the trapped cells mix their cytoplasmic content to form tetra- to poly- ploid cells. This event generally conducts to the formation of fully differentiated multinucleated cells, but can be diverted in favor of malignant transformation and tumor progression provided that the genome guardians do not fulfill their roles and tolerate further cell cycling7. First proposed by Aichel more than one century ago, the fusion theory of tumor progression posits that a combination of extra chromosomes and the distinct origins of these chromosomes (originating from two different cells or cell types) could be the source of aneuploidy8,9. At present, animal models and clinical data are strong enough to validate/endorse its role in human cancers10–16. Specifically, Gast et al. have recently reported that the presence of cancer cells - macrophages hybrids in the peripheral blood of human cancer patients correlate with disease stage and predict overall survival12. This particular study provides another proof that partnering with a cell endowed with motile properties is favorable for metastasis.

Here, instead, we wondered, whether cell fusion per secould trigger a nuclear/cellular reprogramming so profound that it would provide growth and spreading advantages to hybrid cancer cells, regardless of its origin (i.e. resulting from parental cells with or without established migration properties).To asses this crucial question in a more comprehensive model we decided to study cell fusion in the Weinberg’s model of mesenchymal oncogenesis (supposed to be the one of pleomorphic undifferentiated sarcomas) and isolated spontaneous (naturally occurring) cell-cell fusions between immortalized and transformed fibroblasts. The whole characterization and in vivo behavior of these hybrids is fully reported in our paper published today in Oncogene: Lartigue et al; Oncogene 2020 (https://rdcu.be/b3mXg). In that study, we show how cell fusion triggers genome remodeling, tumor aggressiveness and metastatic spread. These very exciting results gave rise to further questionings, especially about the role of cell fusion in the very first step of oncogenesis. We already provided some insights and responses to that question in our previous paper published in Oncogene (Delespaul-Merle et al, Oncogene 201917) and are currently working on the hijacking of cell fusion in the inception of sarcoma with muscle differentiation, originating from myoblasts. Finally, we now focus on deciphering this cell fusion mechanism directly in sarcoma patients. 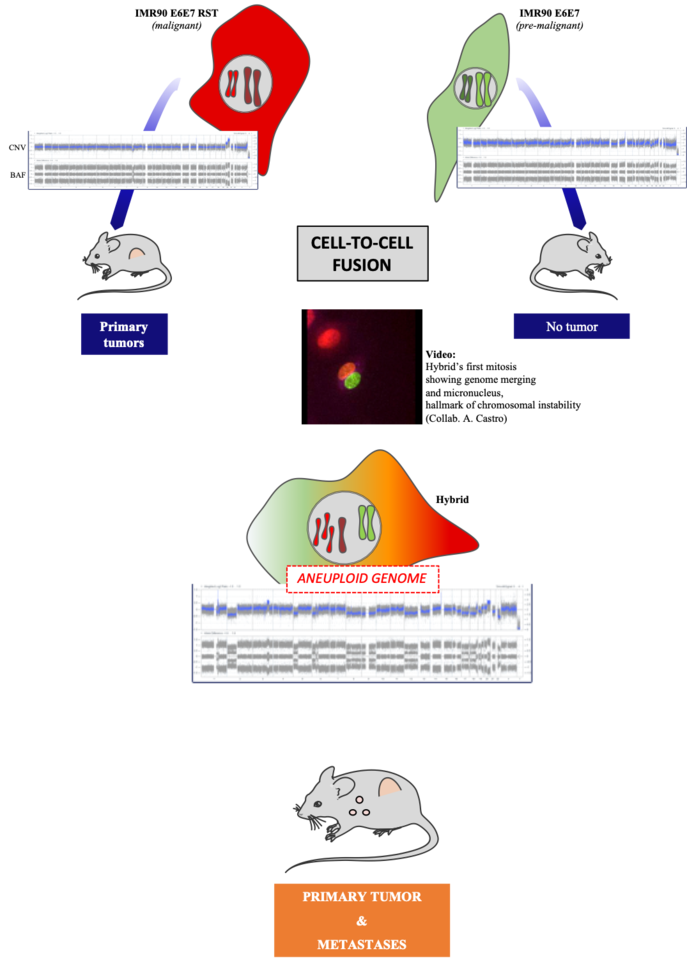