Triple negative breast cancer (TNBC) is arguably the most malignant subtype among all breast cancers. It is easier to metastasize with a considerably higher death rate compared to other breast cancers or non-TNBC. And currently, there are no effective ways to treat TNBCs.

As of now, very little is understood about what makes TNBC so malignant. In the article “Neural functions play different roles in triple negative breast cancer and non-TNBC”, we have studied the issue from a neural function perspective. We have investigated which neural function genes are active in TNBC vs. non-TNBC; what signals may have triggered the activation of distinct neural genes in TNBC vs. non-TNBC; and what are the consequences after the activation of neural genes. We study their behaviors via mining and modeling their gene expression data.

Generally, the major functions of the nervous system outside the brain and spinal cord are sensing, not only vision or hearing from outside the body, but also local infections inside the body, and sending signals to the brain and spinal cord, which direct local regulatory systems to respond to the signals. Our first observation of the TNBC vs. non-TNBC data is that TNBCs involve considerably more genes of neural functions than non-TNBCs (see the following figure), suggesting that tissue environments where TNBCs originate are more complex, making it more challenging for the affected cells to survive.

Detailed analyses have revealed that the activated neural functions in TNBCs tend to be associated with more cell-environment interactions and rebuilding of the foundation of the tissue, named extracellular matrix, and less damages inside the cells comparing to non-TNBC, which suggests that the surrounding tissues of TNBCs are more extensively damaged; and the level and extent of tissue repair are more significant than in non-TNBCs.

In addition, we have noted that the immune responses in TNBCs are different from those in non-TNBC. Specifically, the response genes to neural functions in TNBC are predominantly immune related genes, which is not the case in non-TNBCs.

Our results extend the previous studies which have found that neural functions are essential to cancer development and metastasis. In this work, the key new insights gained about TNBC vs. non-TNBCs are (1) The malignancy level of TNBC may be the result of the extent and the depth of damages in the tissues where TNBCs stem from; and (2) the nervous system serves as a bridge that connects tissue damage and the repair machinery, and its level of involvement reflects the complexity of the repair needs in TNBC. 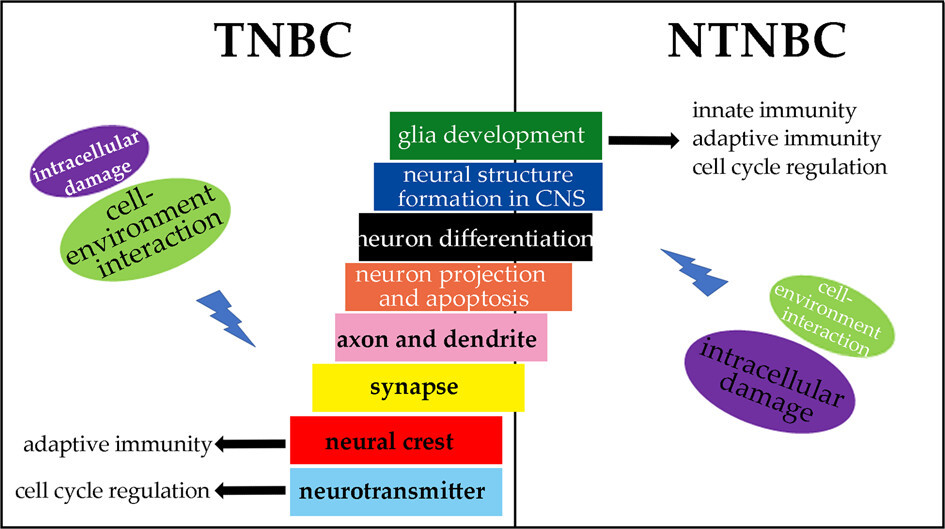