The diagnosis “therapy-related myelodysplastic syndrome” (t-MDS) for many of us is directly associated with dismal prognosis. Classification and prognostication of t-MDS have been clearly neglected.  Regarding WHO-classification 2016 t-MDS are simply lumped together with t-AML and t-MDS/MPD. They were excluded in the development of almost all relevant prognostic scoring systems and are often excluded from clinical trials as they are felt to be of uniformly poor prognosis.

We have compiled a database including 2032 patients with t-MDS from different centers of the International Working Group for Prognosis in MDS and the U.S. MDS Clinical Research Consortium. Cytogenetic data was extensively reviewed and strict selection criteria with regard to data completeness were applied. Patients with primary disease in progression were excluded from prognostic evaluations. For these prognostic evaluations 1245 patients were available. Our large database enables us to perform different analyses to improve knowledge and treatment of t-MDS.

In the current publication we have concentrated on MDS classification.

One future project will involve descriptive data and try to do correlations between karyotypes, previous diseases and therapies.  In earlier publications, almost all patients had high-risk karyotypes, including chromosome 5 and 7 abnormalities as well as complex karyotypes. These features stay a hallmark of t-MDS, but concern, by no means, all patients with a history of chemo- and/or radiotherapy. In our database we found a surprising number of patients with normal karyotype or with a single aberration. Del(11q) and del(5q), as an example, were more probable after non-malignant conditions. The risk of t(11q23) was extremely high after chemotherapy, while del(11q) and -Y were less frequent. In contrast, del(20q), del(5q), del(11q) and -7 occurred frequently after radiotherapy . -Y was common after long, while t(11q23) was found after shorter latency periods.

Another interesting question arising is how to decide, whether a patient has a truly therapy-induced disease or a sporadic MDS with an accidental history of chemo/-radiotherapy. Are there certain markers typical for primary versus secondary disease?

In a concluding step we will concentrate on prognosis and analyze if prognostication of patients with t-MDS is different from primary MDS and if it can be improved. In the current manuscript we find the IPSS-R of great value, but early analyses show, that the impact of prognostic markers might differ, with cytogenetic features having enhanced predictive power. A difficult task is the incorporation of influences of the primary disease. T-MDS are even more heterogeneous compared to p-MDS, since we find scoring systems perform different in patients with a history of hematological disease versus solid tumor or chemotherapy versus radiation or both, but should be able to evaluate all.

In the current publication we applied classification as well as prognostic tools and tested their performance in comparison to 4593 patients from the IPSS-R database. We present an important finding as there was a significant difference in survival of patients within the WHO-groups which is in contrast to the WHO-classification and should lead to a rethinking regarding the diagnosis of t-MDS and probably a revision of its current classification. 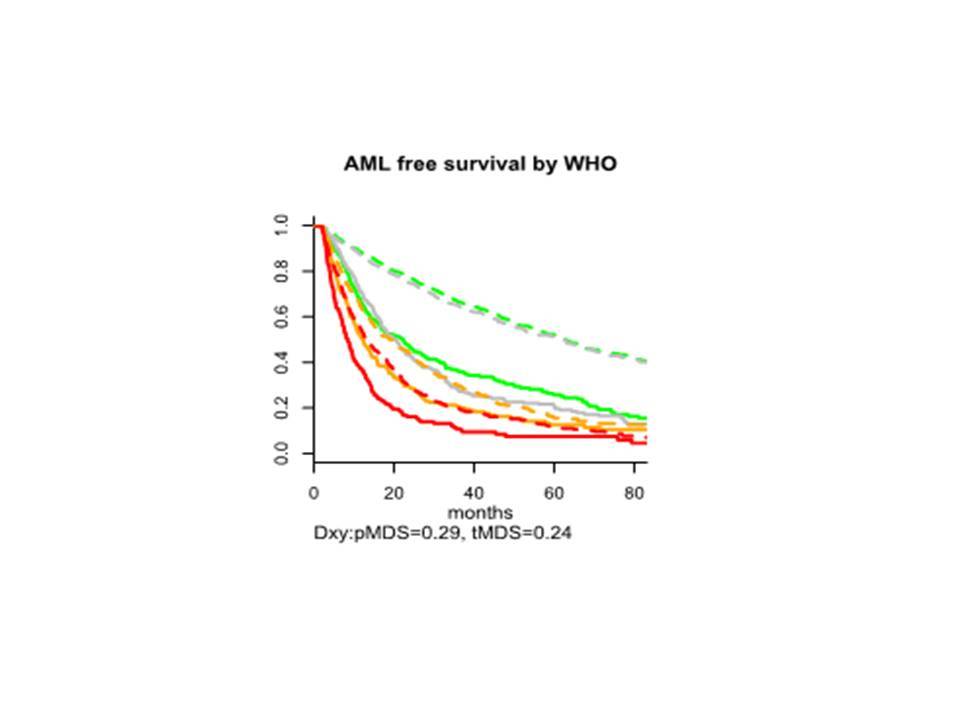