Patient with gigantism usually develop a tumour in the pituitary gland, a small gland inside the head behind the eyes, in childhood. These tumours make too much of one of the hormones of the pituitary, called growth hormone (GH) and cause rapid growth of height leading to gigantism. Almost half of the patients with gigantism have a mutation in a gene called AIP. Although AIP is expressed all over the body, mutations in this gene only cause pituitary tumours making GH. Prof Márta Korbonits in London had been working with patients with inherited AIP gene variants. Pathogenic mutations range from missense point mutations, stop codons, small insertion to large deletions. Sometimes genes – and AIP is not an exception – have genetic variants where it is unclear if the change is pathogenic or just a benign variant. This is important, as clinicians need to counsel the family of a patient with gigantism regarding the nature of any change identified.

The discovery started nine years ago, at the lobby of the European Congress of Endocrinology, when Márta started to chat with Prof Clara Alvarez, a basic scientist interested in pituitary function who is based in CIMUS in the University of Santiago de Compostela, Spain. Clara had established that normal GH-secreting cells, somatotrophs, express the RET tyrosine-kinase receptor. In these very specialised cells, RET can behave in two opposite ways.

At that lobby in 2012, Márta and Clara were discussing why germline AIP mutations, a protein expressed in all cell types, could specifically affect the somatotroph cells in the pituitary and no other cells. Could it be that AIP had a role on the RET pathway? Indeed, a recent paper has demonstrated an association of RET and AIP in HEK293 cells, a kidney cell line; however, this association was not shown to have any functional role, and was not altered by AIP mutations. This was a rather discouraging observation for the team…

To test those AIP mutations that resulted in a lack of AIP protein, knockdown of Aip was used in a rodent cell line, obtaining the same result: no AIP, no RET-induced PIT1-mediated apoptosis.

These studies were followed by detailed molecular work regarding PIT1/CDKN2A-ARF/p53 accumulation, which was also shown to be prevented by pathogenic AIP mutants. The data suggested that AIP was playing a key role at the initial step, when RET + PKCdelta is processed by caspase-3. These experiments have now demonstrated that a complex is formed between the four proteins RET – PKCdelta – caspase-3 – AIP on the intracellular aspect of the plasma membrane. This complex initiates the pathway to induce PIT1 accumulation and apoptosis. Mutations leading to loss of AIP function block the formation of this complex, and therefore the cleavage of RET, upregulation of PIT1 and p53. Molecule-to-molecule association comparing different AIP mutations was also studied. These showed that different AIP mutations affected the binding of AIP to one or the other members of the protein complex. In the figure below, the mutant R325Q-AIP is unable to bind to RET while the other variants can. Similar studies using PKCdelta or caspase-3 as AIP partners showed lack of binding with different mutants.

The next step was to demonstrate this interaction in animal models. In the spirit of NC3R, the team did not consider generating a genetically-modified mouse for each AIP variant. Instead, retrovirus containing an AIP mutation injected into the pituitary at the first postnatal day of rats, just when the bones are still soft and microinjection can reach the pituitary, taking advantage of the proliferative state of somatotrophs in newborns, since retroviruses infect proliferating cells. Rats were used since they are larger than mice, and in fact no single animal died of the injection. 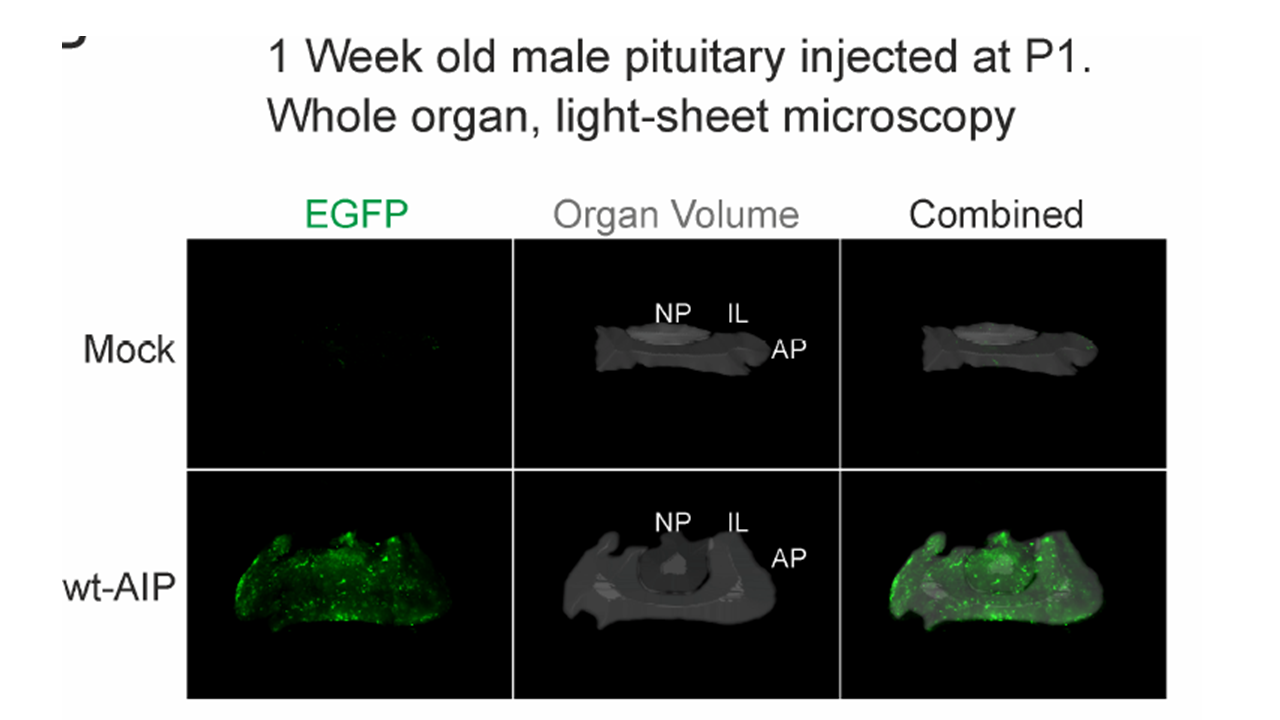 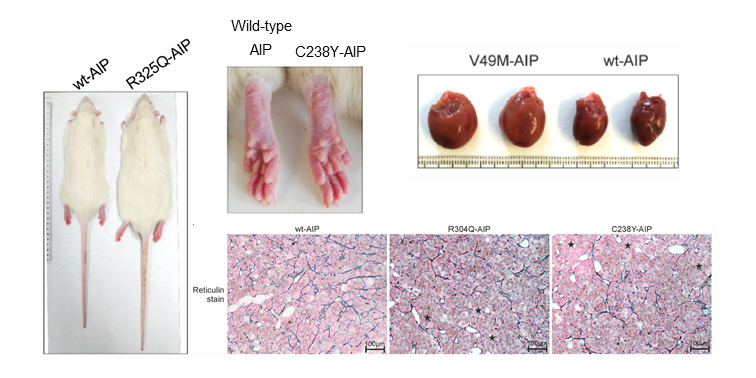 This is what was seen in “male” rats. What about the “female” rats? Let’s see. While some of the female rats bearing pathogenic AIP mutants presented with gigantism, the mean body length at 16 weeks did not reach statistical significance in any of the pathogenic AIP mutations. When analysing the data in detail, the team noted that females were larger, like males, until puberty. However, after puberty, which occurs earlier in females than males, females were slowed in their growth but they did show somatotroph hyperplasia as the males. This is quite interesting, in fact. In humans, gigantism is more frequently diagnosed in males, while acromegaly is more frequently diagnosed in females. However, there is no sex-related differences regarding AIP mutations. 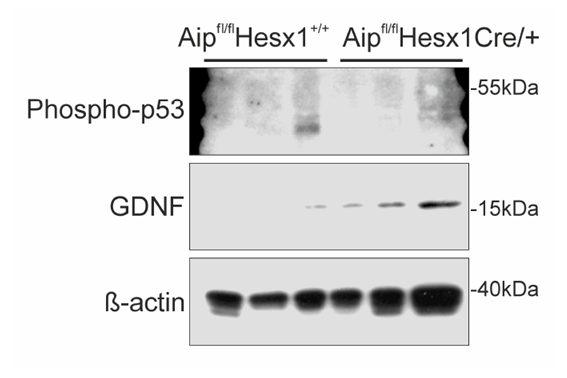 A second model that used was a pituitary-specific Aip knockout mouse. Aip deletion induced pituitary tumours as in humans. These tumours had more GDNF and less active p53, confirming the relationship between the RET-GDNF survival pathway and the AIP-deletion-induced tumours. Pituitary tumour tissue samples from human patients with AIP mutations were also studied, and demonstrated high expression of RET and GDNF in both sporadic and AIP-caused somatotrophinomas, but with less CDKN2A-ARF in the AIP-mutated tumours.

This work demonstrates the essential balance between apoptosis and survival in very specialised cells, whose excess of function could be risky for our species. While tall humans are stronger, excess tallness is disadvantageous, as their bones must support heavier body weights and in the long term they age faster. 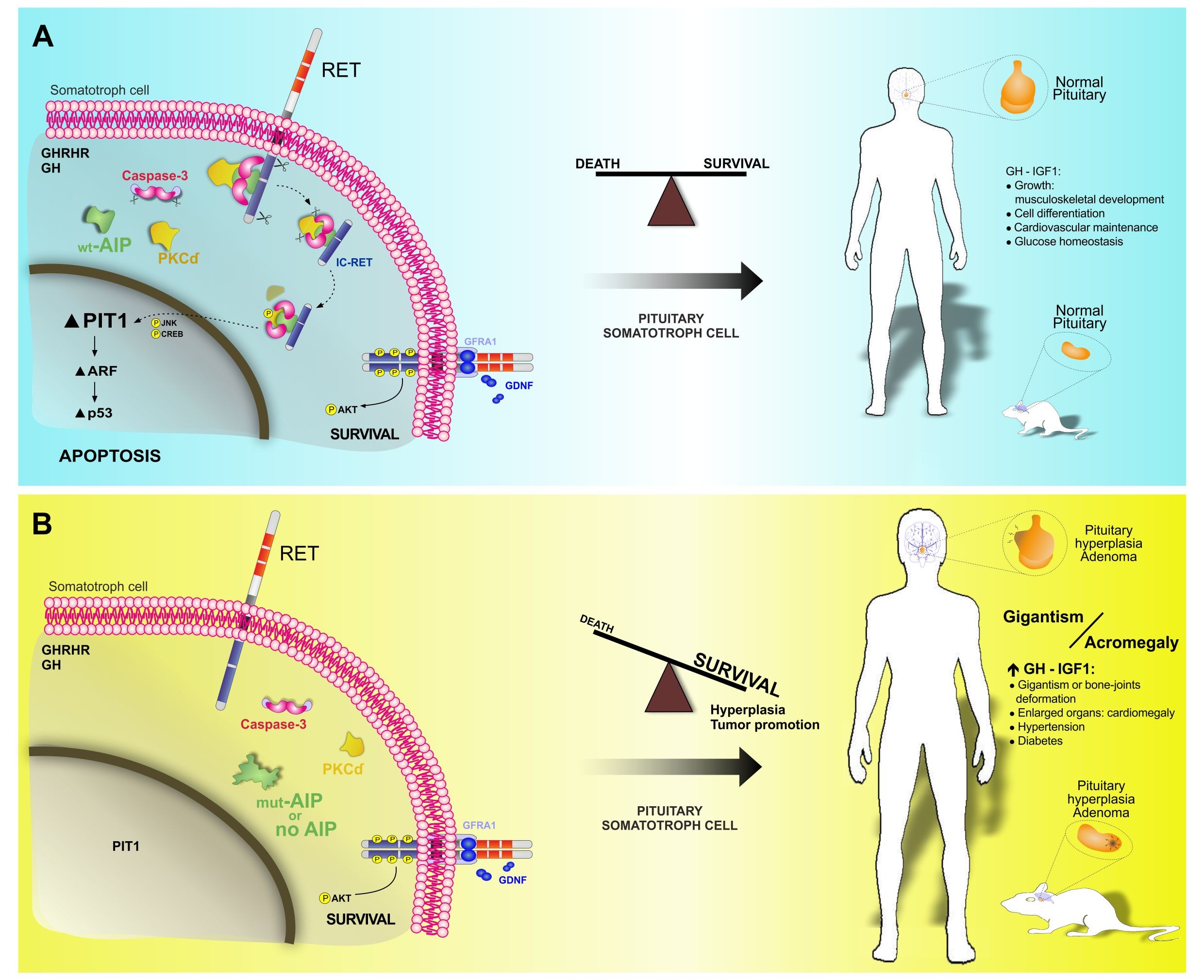 One might speculate that possibly the RET pathway in somatotroph cells controls our total body growth through this mechanism in the somatotrophs. Associating a protein known to be important to differentiation – PIT1 – with its excess leading to cell-death, is a marvellously sophisticated cellular mechanism. This mechanism may also at play in other highly specialised cells in the human body.

Another interesting aspect of the study is the presence of hyperplasia. While in humans, most of the time, there is a tumour by the time of diagnosis, in the mouse and rat animal models hyperplasia is a preceding previous step. This work shows that alteration of the RET-AIP pathway is the basis of tumorigenesis, with the tumour later acquiring other genetic alterations, such copy-number variations as recently demonstrated. The introduced novel experimental set-up can also help deciding on individual AIP variants if they lead to altered RET-AIP pathway, therefore helping genetic counselling. The data also provide novel ideas for pharmacological therapy of these tumours. Currently, only somatostatin-analogues are available to control tumour growth after surgery, and AIP-mutation positive tumours are frequently resistant to these analogues. These results provide opportunity for new treatments based on RET-tyrosine kinase inhibitors. 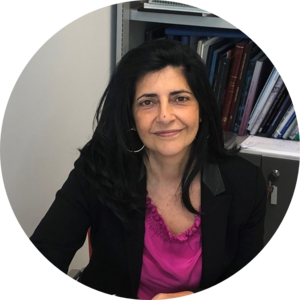 We try to combine the clinical knowledge  of Endocrinologists, Surgeons and Pathologists with our molecular research expertise  in tumour Endocrine diseases, specially from thyroid cancer and pituitary adenomas.