Aberrant expression of the transcription factor ERG is frequent in prostate cancer due to gene fusion between the ERG gene and the promoter of the TMPRSS2 gene. This simple genetic rearrangement leads to the over-production of ERG in prostate epithelial cells. However, how ERG induces prostate tumorigenesis and drives prostate cancer progression from primary to metastatic and hormone-refractory tumors is still undefined. We have been struggling to understand the evolution of ERG fusion-positive prostate cancer and the role of concurrent events in this process.  This study uncovers a novel mechanism that enhances ERG activity and promotes progression in ERG-fusion-positive tumors. We found that EZH2 is an essential partner-in-crime of ERG in this process. The histone methyltransferase EZH2 works by adding methyl groups on histone proteins, reducing chromatin accessibility, and silencing transcription. We found that EZH2 also binds and adds a methyl group at lysine K362 in ERG protein. This lysine residue is in a critical position at the boundary of the internal auto-inhibitory domain found in many ETS transcription factors. K362 mono-methylation is at the basis of the cooperation between ERG and EZH2 and, through physical and functional interactions, the activation of a network of genes sustaining tumor progression, metastasis, and treatment resistance.

This work relied on implementing multiple experimental models, analyzing human patient data, and a multidisciplinary approach, from computational biology, protein structural modeling, molecular oncology, and pharmacology. Thanks to meticulous teamwork, we dissected the molecular and biological underpinnings of the evolution of ERG fusion-positive tumors. We discovered that the mono-methylation of K362 changes the intra-molecular dynamic interactions within the internal auto-inhibitory modules of ERG and their relation with the DNA binding and trans-activating domain. Although aberrantly expressed in prostate epithelial cells, ERG in the non-methylated state is like a dormant transcription factor with weak transcriptional activity. The EZH2-induced methylation turns on a switch that allows the passage of ERG from the inactive to the active state. The computer-guided simulation of the structural changes induced by K362 methylation was instrumental in revealing the consequences on ERG's DNA binding and transcriptional activity and guiding the experimental planning toward understanding the transcriptional and phenotypic impact. In silico molecular simulations show that K362 methylated ERG assumes a conformation matching the active DNA-bound ERG determined previously by X-ray crystallography. Site-directed mutagenesis studies confirmed that disrupting the K362 intramolecular interactions or mimicking the methylated state induces a protein conformation favoring DNA binding. K362 mutations that prevent methylation reduced tumorigenic phenotypes in cell cultures and tumor xenografts, mimicking methylated ERG enhanced transcription, chromatin binding, and tumor growth.

Moreover, our study reveals an entirely new aspect of the ERG/EZH2 partnership. Mechanistically, we found that ERG and EZH2 can form transcriptional activating complexes and that EZH2 sustains ERG trans-activation. Thus, in this context, EZH2 acts as a co-activator of ERG in a non-canonical PRC2-independent mode. This non-canonical function of EZH2 in ERG-positive prostate tumors involves the direct interaction, methylation, and functional cooperation with ERG resulting in enhanced trans-activation of selected co-regulated target genes. To understand the connection between methylation and malignant transformation, we turned to a genetic mouse model, the ERG/PTEN mice. PTEN deletion in ERG transgenic mice is necessary to awaken the oncogenic capability of ERG. Consistently, we found increased ERG methylation in ERG/PTEN mice compared to ERG transgenic animals, suggesting that enhanced ERG methylation could provide a mechanistic explanation for the combined effect of ERG gain and PTEN loss. Turning to a prostate cancer cell line with the TMPRSS2:ERG gene fusion (VCaP), we show that PTEN deletion enhances Akt-mediated phosphorylation of EZH2 at the serine 21 (S21). Interestingly, pS21 phosphorylation of EZH2 promotes non-canonical EZH2 activity with a switch in substrate preference and, in our context, increases ERG methylation. Consistently, PTEN deficiency increases genomic occupancy of ERG-EZH2 complexes and expression of co-regulated genes in cell lines, mouse models, and patient samples, confirming the link between PTEN loss and enhanced ERG oncogenic activity.

Our study shows that ERG methylation is a critical post-translational modification enabling the activation of pro-tumorigenic and pro-metastatic programs. Relevantly, our data define also a therapeutically actionable pathway. Indeed, treatment with EZH2 inhibitors reverted both transcriptional and phenotypic alterations induced by ERG. This study, thus, provides new insights into the mechanisms underlying epigenetic reprogramming in ERG-positive prostate cancers and shows the critical role of the functional interaction of ERG and EZH2 in promoting tumor progression. Therefore, using selective inhibitors of EZH2 might be an efficient strategy against aggressive ERG-positive prostate cancer. Interestingly, EZH2-mediated activation of ERG might play a role in other cancers with genetic rearrangements or amplification of ERG, serving as a concurrent event to promote disease progression. Our current focus is to investigate the additional mechanisms that may trigger EZH2-mediated ERG methylation and therapeutic strategies to reverse this post-translational modification and disrupt the ERG co-regulatory network responsible for tumor progression. 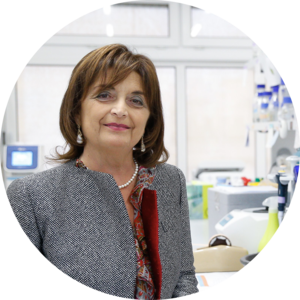