Many factors contribute to T-cell dysfunction in cancer, which vary from patient to patient, and cancer to cancer. T-cells are pre-programmed to downregulate their activity after repeated stimulation by increasing their expression of inhibitory receptors, leading to a cellular state called exhaustion. This is a normal response to prevent unnecessary damage to the host after an infection is controlled. ICB aims to reverse this process and restore T-cell functionality by blocking exhaustion markers such as programmed death 1 (PD1) or its ligands (i.e. PD-L1). But, many cancers employ multiple methods of immune suppression. B cell Chronic Lymphocytic Leukemia (CLL) is one such malignancy where widespread immune dysfunction includes numerous T-cell deficits and poor responses to anti-PD-1 ICB therapy1,2.

CLL cells produce several immune regulatory molecules, but one notable mention is Interleukin-10 (IL-10). This regulatory cytokine is particularly potent on T-cells, decreasing their anti-cancer activity both directly and indirectly. Previously we showed that removing IL-10 signaling from T-cells improves control of disease in an animal model of CLL where Eμ-TCL1 (de novo mouse CLL cells) are adoptively transferred into immune compromised mice with primed T cells3. Given that IL-10 and PD-L1 downregulate T-cell function by non-redundant mechanisms, we tested combining ICB and IL-10 suppression to restore anti-tumor immunity in this system.

There is more than one way to skin a cat, and there is more than one way to suppress IL-10. We utilized a novel small molecule, MTMox32E, that is an analogue to an old Sp1 inhibitor, mithramycin (plicamycin)4. Sp1 is required for CLL IL-10 production, and this analogue suppressed CLL cell IL-10 secretion. MTMox32E also has a window of therapeutic efficacy where CLL IL-10 is suppressed but anti-tumor T-cell cytokines (IL-2 and interferon-γ) are not. By itself, IL-10 suppression moderately reduced CLL burden, delayed disease progression, and enhanced T-cell effector function in mice.

In our hands anti-PD-L1 therapy in recipient mice (given Eμ-TCL1 CLL and primed CD8+ T-cells) only modestly affected disease and did not improve T-cell functionality. But the addition of IL-10 suppression improved control of CLL in multiple compartments. Compared to ICB alone, a larger proportion of the T-cells from doubly treated mice were in a more functional state (KLRG1+ effector cells and CD27+ memory cells), and there were higher numbers of interferon-γ and Granzyme B expressing CD8+ T-cells. This significantly delayed the progression of disease and increased survival time, even when treatment was ceased 3 weeks prior.

The strategy of combining multiple T-cell immune therapies to improve anti-tumor activity is one that may be applicable to a variety of cancers. Specifically targeting IL-10 could also be used to change the tumor microenvironment and enhance anti-tumor T-cell activity, especially in malignancies with significant immune suppression. 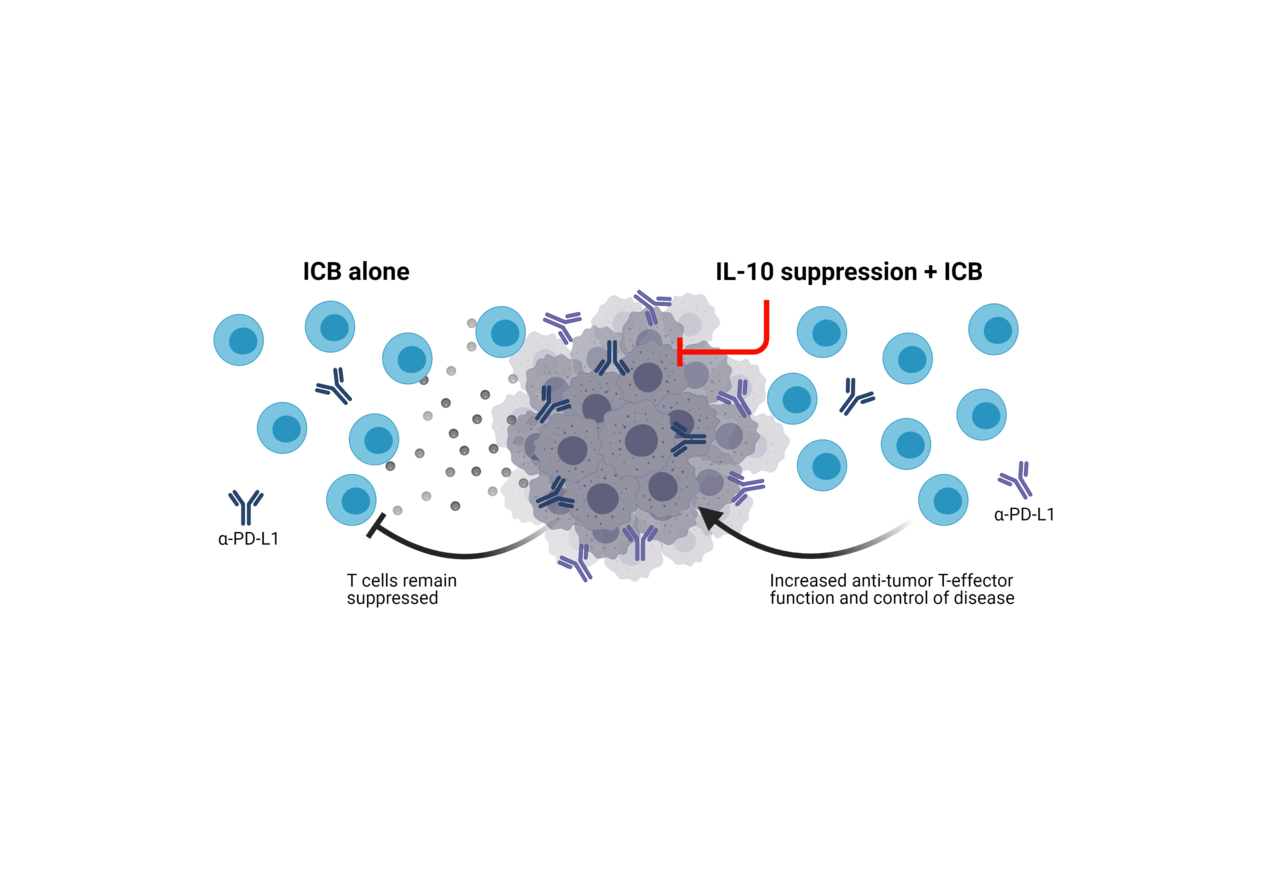