Where did we start?

The cellular prion protein PrPC is overexpressed in several types of cancers and has been incriminated in various hallmarks of cancer, including cell proliferation, migration, invasion and resistance to treatment 1. This protein was historically discovered as the normal counterpart of the pathogenic scrapie prion protein (PrPSc), which causes spongiform encephalopathies, also called prion diseases 2. The function of PrPC has been extensively studied in neurones, with the aim to understand how it is corrupted when PrPC is converted into its pathogenic counterpart, PrPSc, and how this leads to neurodegeneration. One salient finding in the field was the demonstration that PrPC can act as receptor or co-receptor at the cell surface of neuronal cells and associates with the membrane protein Caveolin 1 (CAV1) to promote activation of the Fyn tyrosine kinase3. After the discovery that PrPC serves as a receptor for the amyloid peptide Aβ that accumulates in Alzheimer’s disease 4, it was found that Aβ also deviates the function of PrPC in neuronal cells and that the over-activation of the PrPC-CAV1-Fyn signalling platform contributes to the toxic effects of Aβ accumulation 5,6. Both PrPC and APP, the Amyloid Precursor Protein that is cleaved to generate Aβ peptides, are ubiquitous, and are overexpressed in different types of cancer. We had notably recently documented that PrPC is overexpressed in the mesenchymal subtype of colon cancer, which has the most dismal prognosis7,8. As for CAV1, its expression is frequently deregulated in cancer, and it was found to be associated with epithelial to mesenchymal transition in a large panel of cell lines9. Based on these observations, we made the provocative assumption that an Aβ-PrPC-CAV1 signalling hub may also form in cancer cells and foster cancer progression (Figure 1).

What did we do?

In a first step, we chose to mine public databases to assess whether PRNP, the gene encoding PrPC, and CAV1 may be co-expressed in cancer cells or in patient tumours. We then employed gain- and loss-of-function approaches in cell lines to probe functional relationships between PrPC, CAV1 and Ab and further assessed the impact of an antibody that specifically targets the Aβ-binding epitope in PrPC. We next performed in vivo experiments to assess whether high Aβ  has a tumour-promoting effect and whether this effect can be counteracted by blocking its interaction with PrPC. Finally, we queried datasets to evaluate the potential translational relevance of our findings for prostate and colon cancer (Figure 2).

What did we find?

We found that CAV1 is the 2nd most correlated gene with PRNP across the Cancer Cell Line Encyclopaedia, and that the levels of PRNP and CAV1 transcripts are highly correlated in several patient cohorts of The Cancer Genomic Atlas (TCGA), most notably in prostate and colon adenocarcinoma. By exploiting prostate and colon cancer cell lines, we observed that PrPC regulates the expression of CAV1 and that the two proteins co-localize. PrPC further regulates the expression of APP as well as that of BACE1, a protease that cleaves APP to generate Aβ peptides10. Accordingly, we showed that PrPC controls the levels of extracellular Aβ peptides in prostate and colon cancer cells. We went on to examine how cells respond to the blockade of the Aβ-PrPC interaction and we found that cell exposure to the 6D11 antibody that targets the Ab-binding epitope in PrPC caused a decrease in several effectors of interest, namely DKK1/DKK3 and PDGFC. It also promoted a reduction in the levels of soluble TGFβ as well as TGFβ-mediated signalling, which play a major role in the mesenchymal subtype of colon cancer 11. These effects were specific to this blocking antibody and were not observed when using an antibody targeting a different epitope within PrPC. The next step was to undertake xenograft experiments to evaluate the potential beneficial effect of the 6D11 antibody in vivo. In mice bearing PC3 prostate cancer cells, a bi-weekly injection of 6D11 antibodies slowed local tumour growth, prolonged survival by > 100%, and significantly reduced the number of metastases. To ascertain that the effect of the antibody was mechanistically related to the disruption of the Aβ-PrPC interaction, we used the same xenograft experimental paradigm but this time we treated tumour-bearing mice with Aβ peptides, in combination or not with 6D11 antibodies. Mice receiving Aβ had larger tumours and a slightly lower survival period than saline controls. Crucially, the tumour promoting effect of Aβ was cancelled when mice were simultaneously treated with 6D11 antibodies. In the last part of our study, we mined several patient datasets and we found that the effectors involved in the Aβ-PrPC-CAV1 signalling axis are enriched in the basal type of prostate cancer as well as in the mesenchymal subtype of colon cancer. Furthermore, in colon cancer, we demonstrated that patients with high expression of the Aβ-generating enzyme BACE1 have a significantly worse overall and relapse-free survival (Figure 3).

In the present study, we used the 6D11 blocking antibody as single agent. We now need to evaluate whether combining 6D11 antibodies and conventional chemotherapeutic agents promotes better responses than either treatment alone. Another future direction is the use of other preclinical models of interest, including patient-derived xenografts or immunocompetent mouse models. Altogether, this may pave the way towards the development of novel therapeutic strategies to treat basal prostate cancer and mesenchymal colon cancer patients. 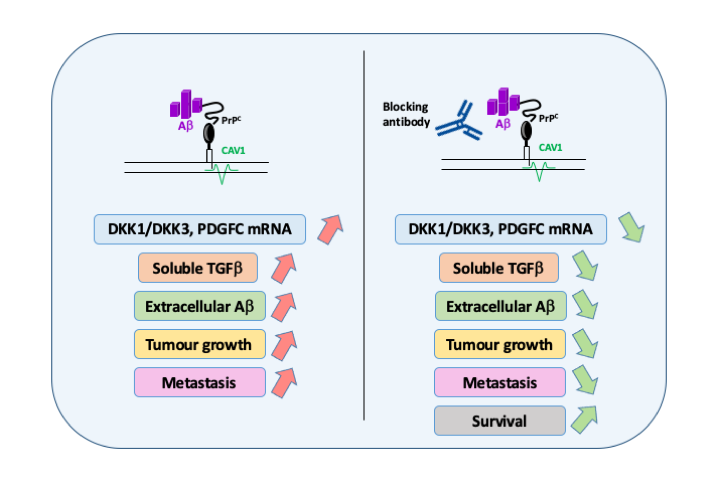