Treatment for Acute Myeloid Leukemia (AML) has remained largely unchanged for over 40 years. Chemotherapy is still the standard of care and cure rates have only increased modestly, especially in those patients who relapse after primary therapy or those who have high risk disease. One factor that makes AML so hard to treat is the presence of leukemic stem cells (LSCs) which are a subset of cancer cells that are resistant to chemotherapy and lead to relapse of the disease.

Targeted immunotherapy could be a curative treatment option for AML. This refers to directing cells of our immune system to identify and kill cancer cells based on the presence of specific markers present on the cancer cell surface. In our lab, we work with a subset of immune cells called Natural Killer (NK) cells. Several studies have demonstrated the therapeutic potential of NK cells in the treatment of leukemia with 30–50% remission reported after NK-cell infusions. Most significantly, NK-cell therapies have a good safety profile in a clinical setting with essentially no graft-versus-host-disease and rare instances of cytokine release syndrome (CRS) and neurotoxicity.

To target AML cells using NK cells, we developed a series of molecules called trispecific killer engagers (TriKEs). TriKE molecules contain an anti-CD16 portion that activates NK cells through engagement of the CD16 receptor, an IL-15 molecule that provides signals for NK cell priming, expansion and survival and a portion that engages specific cancer cell markers. When I joined the lab, we had just published our first TriKE paper targeting CD33, a marker present on AML cells. While CD33 is present on a large proportion of AML cells, it is also present on normal hematopoietic stem cells (HSCs) leading to toxic off-target effects. We would later learn that activated NK cells also have some CD33 on the cell surface. Given these limitations, we identified CLEC12A or CLL1 as an alternative marker to target AML cells. CLEC12A is highly expressed by AML cells and most importantly, it is present on LSCs but not healthy HSCs. 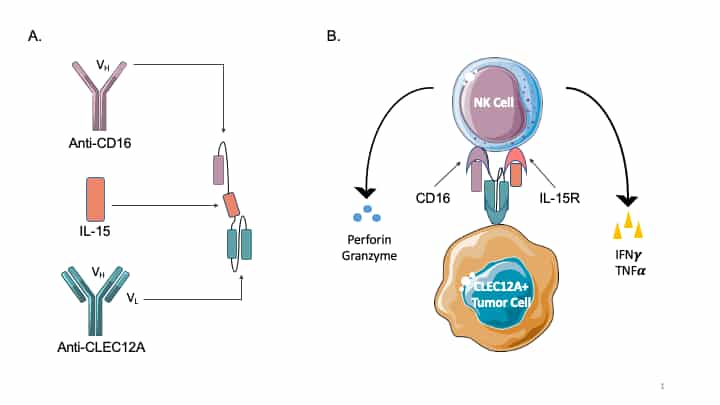 I developed a TriKE against CLEC12A (CLEC12A TriKE) (Figure 1A). This TriKE was able to direct NK cell killing of AML cells that had CLEC12A on their surface (Figure 1B). We immediately identified Dr. Harry Dolstra as a collaborator due to his interest and knowledge about CLEC12A as well as his access to patient derived primary AML cells in which they knew the expression levels of CD33 and CLEC12A. This would allow us to compare targeting of CLEC12A and CD33. I was able to meet Dr. Dolstra and his graduate student, Paulien at the Meeting for the Society for Natural Immunity. We discussed the project and were able to delegate experiments based on the expertise of each lab. Paulien would test the ability of the CLEC12A TriKE to enhance NK cell killing of primary AML cells and test off target effects in healthy bone marrow samples. I would test the efficacy of the CLEC12A TriKE using cancer cell lines in vitro and mouse experiments in vivo. One assay that gave us a deeper understanding of TriKE based killing was an Incucyte assay. Here, we were able to fluorescently label AML cells with a red dye and assess their killing over time via incorporation of Caspase 3/7 green dye; dying AML cells become yellow as the two dyes are expressed on the same cell. NK cell killing was greatly enhanced when the CLEC12A TriKE was present (Video 1) compared to an NK cell only control (Video 2). The most challenging assay was the killing assay with LSCs from primary AML bone marrow samples because they are an extremely rare population. We were only able to track killing in a shorter 5-hour assay since LSCs were not detectable after that point irrespective of whether NK cells or TriKE was present.

Overall, we were able to show that the CLEC12A TriKE induced robust NK-cell specific proliferation and enhanced NK-cell killing of both AML cell lines and primary patient-derived AML blasts in vitro while sparing healthy HSCs. Additionally, the CLEC12A TriKE was able to reduce tumor burden in preclinical mouse models of AML. We are currently dosing patients with a CD33-Targeted TriKE (NCT03214666) but given the safety profile of CLEC12A and the fact that its expression profile is stable throughout diagnosis, treatment and relapse on leukemic cells and LSCs, CLEC12A should be considered a highly potent and reliable alternative to CD33. These factors make the CLEC12A TriKE a compelling option for the treatment of AML to stimulate endogenous NK cells in low risk patients or in combination with adoptive NK cells in high risk patients 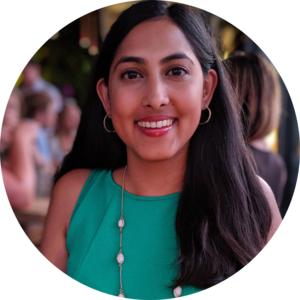 The Covid-19 pandemic and impact on breast cancer diagnoses: what happened in England in the first half of 2020

Breast cancer is the most commonly diagnosed cancer in women in England.  Data from the NHS Cancer Waiting Time team was used to examine the impact of the COVID-19 pandemic on breast cancer diagnoses in the first half of 2020.  I will briefly explain the main findings and plans for further work.

Obesity and cancer- moving beyond the epidemiology to focus on intervention research Annie S. Anderson, University of Dundee

Obesity and cancer can be an emotive topic laden with guilt and a feeling of being overburdened. It has been described as the “elephant in the room” but the bottom line is that it is time to move beyond epidemiology and mechanisms to open the door on interventional research.

Annie Anderson
Nature Research Cancer Community
We use cookies to help improve your experience. By continuing to browse our website you are consenting to our use of cookies.
Learn more