The signalling pathways underpinning cell growth and invasion use overlapping components, yet how mutually exclusive responses occur is unclear. Here, the authors show that alternate isoforms of the ARF GTPase exchange factor IQSEC1 direct phosphoinositide metabolism to control this switch.

Cells continuously respond to signalling inputs such as cytokines, growth factors and hormones. These soluble ligands bind to receptors or become internalised and convey information instructing cells to grow, change their shape, commit to apoptosis or alter their metabolic activity. When signalling pathways are inappropriately activated due to genetic lesions, cancer can arise. Extensively studied pathways such as AKT-mTOR and RAS/RAF/MEK/ERK, have been known to control not only survival and growth, but also events leading to the acquisition of invasive behaviour in tumours1. This paradox has led to several questions. How are cells able to execute distinct functions by using the same core set of effectors? What are the molecular details involved in the decision between growth and invasion? Can you have one without the other? Importantly, can we use this knowledge to predict clinical outcome and stratify survival rates of cancer patients?

In our recent paper, we have used 3D culture of prostate cancer (PC3) cells embedded in extracellular matrix to study epithelial growth and invasion. We used a range of techniques including live imaging and identified the ARF Guanine Exchange Factor (GEF) IQSEC1 as an important regulator of both processes.

IQSEC1 exists as several transcript variants. Their structural differences occur in alternate C and N-terminal domains, but all isoforms contain the core SEC7 and PH domains required for GEF activity. We mapped the function of individual isoforms reconstituted to cells depleted of all endogenous IQSEC1 isoforms. One particular isoform, IQSEC1 (v2), promoted robust invasion, which another, IQSEC1 v4, only promoted growth. This uncovered unexpected distinct functions of IQSEC1 isoforms, even though all can in theory act as GEFs. This suggests that isoform-specific localisation and/or binding partners may regulating alternating output of growth or invasion.

In contrast to other IQSEC1 isoforms, pro-invasive IQSEC1 v2 localised at the tips of invasive protrusions where it acts as an activator (GEF) for the Arf GTPases Arf5 and Arf6. This function was essential for invasion. We used mass spec proteomics to identify IQSEC1 v2 interactors. identifying the receptors MET and LRP1, and components of the mTORC2 complex (among others). We used an imaging-based internalisation and recycling assay and found that IQSEC1 co-operated with LRP1 to modestly regulate internalization of the MET receptor.

Arf6 has previously been identified as an activator of the PI3K/AKT pathway in response to HGF stimulation in melanoma2. Phosphorylation of PI(4,5)P2 to PI(3,4,5)P3 by Class-I PI3kinases is essential for Akt recruitment to the cell membrane and activation by PDK13. By using molecular biosensors or antibodies specific for different phosphoinositides we uncovered that IQSEC1 was required for accumulation of PIP3 at the cell periphery. In 3D acini, both PIP3 and its precursor PI(4,5)P2 were found on the tips of invasive protrusions in an IQSEC1-dependent fashion, where they acted as hubs of AKT activation.

A key question was whether IQSEC1 regulated general cortical activation of PIP3, or whether IQSEC1 regulated PIP signalling at a specific location to induce membrane protrusions and invasion. General targeting to the cortex by myristylation of components of the PI3K/AKT pathway increased both invasion and growth in PC3 acini. Crucially, depletion of IQSEC1 abolished invasion but maintained growth. This suggests that the IQSEC1 v2-ARF5/6 axis controls specific pools of phosphoinositide signalling at the cell surface to induce cell protrusions, rather than general cortical production.

We confirmed our observations for the role of IQSEC1 in vivo. Intraprostatic xenographs of IQSEC1-depleted cells revealed a striking attenuation of metastasis. Mining clinical patient data revealed that IQSEC1 elevation associated with poor prognosis in prostate cancer patients, more aggressive disease, tumour grade, metastases, and resistance to therapy. IQSEC1 expression could efficiently stratify patient survival across all a number of tumour types. Crucially, induction of IQSEC1 v2 was a common event across a number of tumour types, and elevated IQSEC1 mRNA levels was associated with activation of PI3K-AKT signalling in clinical specimens.

Our study describes the complexity by which signalling pathways can induce a specific cell response. Importantly, we have provided an example of how distinct outcomes may occur upon activation of a single pathway and highlighted that spatial enrichment of effectors in specific cellular domains is a crucial determinant of cell behaviour. On a translational note, we provide evidence that the ARF5/6-IQSEC1 axis is important in driving aggressive disease in a variety of cancer types and has potential value as a prognostic marker. 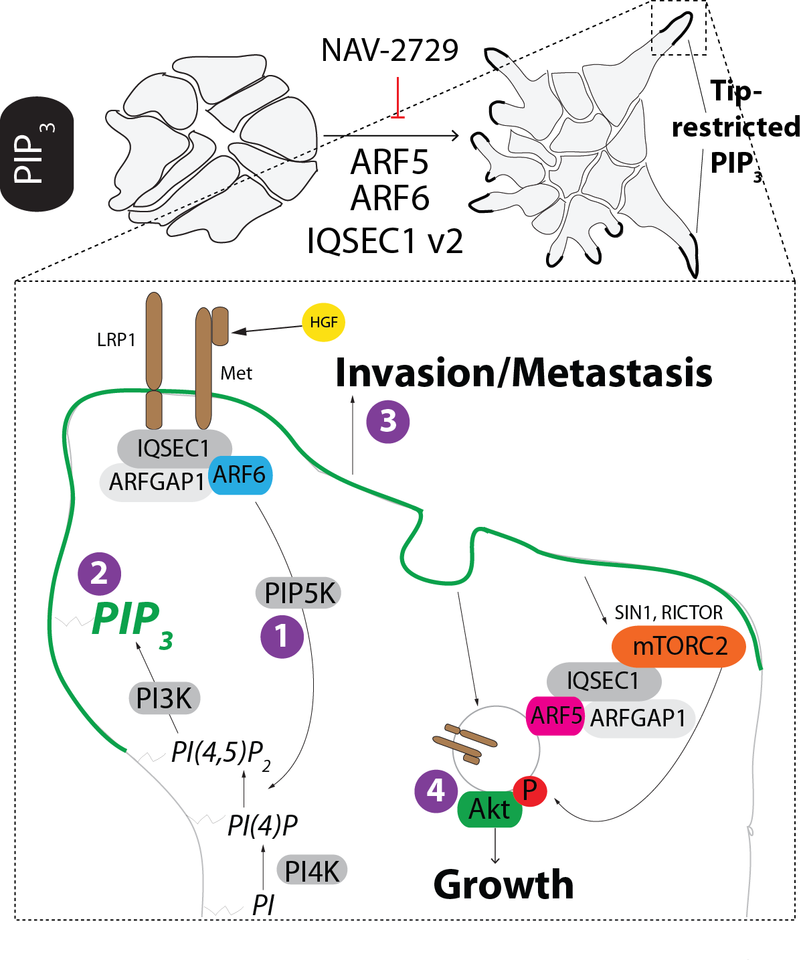