Oxygen gradients affect cellular processes and signaling pathways in the tumor microenvironment (TME). We present a live-cell chamber that replicates these features of the TME and demonstrate that breast cancer cells and macrophages self-organize and their phenotypes vary along hypoxic gradients.
Anne Caroline Gilmore and Will Heinz
2 contributors

The solid tumor microenvironment (TME) is spatially heterogenous and consists of diverse cell types, blood vessels, small molecules, and extracellular matrix. When we study cancer using standard 2D cell culture, we fail to capture complexities introduced by diffusive gradients of oxygen, nutrients, and a buildup of cellular waste that occur in 3D tumors. One approach to model these characteristics is the use of spheroids or organoids. However, these nonuniform structures are not optimal for microscopy techniques and must be optically cleared or sectioned because of light’s inability to pass through these thick samples without scattering or attenuation. To address these challenges, we developed and validated a 2D in vitro model of the TME in which cancer cells and macrophages generate hypoxic gradients, self-organize, and exhibit phenotypes that vary with position in the gradients1. We then applied this microscopy-friendly system to investigate the spatial organization of phenotypes in the inflammatory and immunosuppressive TME of triple negative breast cancer (TNBC).

The restricted exchange environment chamber (REEC) was developed in 2018, and cells cultured in REECs generated radially-symmetric oxygen gradients2.We used this system to study aspects of the TME that could not be studied with standard cell culture. The REEC we constructed was made by gluing a stainless-steel o-ring to a round coverslip with a small aperture in the middle. These are then clamped onto a monolayer of cells in a multiwell plate. The cells under the opening have access to oxygen and nutrients from the media above, but cellular consumption limits how far towards the edge of the chamber these small molecules could diffuse (Figure 1a). We integrated this system and optical microscopy to study live-cell dynamics and then removed the chamber and fixed the cells for immunofluorescence. Cells in the periphery die or try to migrate to the center of the chamber within days, forming a disk of cells around the opening and a necrotic region further out (Figure 1b). We quantified the extracellular and intracellular oxygen concentration and confirmed that hypoxia inducible factor 1 a (HIF1a) localized to the nuclei of hypoxic cells present at the periphery of the disk (Figure 1c). The cell disks are stable with media refreshment for up to a month. This structurally simple device became a versatile tool to study many aspects of the TME from cellular migration dynamics to protein expression and metabolic activity.

We used REECs to investigate how hypoxic gradients play a role in inflammation pathways during tumorigenesis in a TNBC model. We were particularly interested in two proteins involved in inflammation: nitric oxide synthase (NOS2) and cyclooxegenase-2 (COX2). High expression levels of both NOS2 and COX2 are an indicator of poor prognosis in ER- breast cancer patients3,4. NOS2 and COX2 drive a feed-forward loop to produce nitric oxide and prostaglandin E2 and are possible targets of FDA-approved anti-inflammatory drugs that could be used in combination with standard of care treatments3,5. Using the REEC system and 4T1 cells (a mouse cell line with characteristics of TNBC), we found that these two proteins are expressed in different spatial patterns dependent on oxygen availability (Figure 1d). We also found that macrophages, key immune players in inflammation and immunosuppression that participate in the NOS2-COX2 pathway6, populate the more hypoxic regions within our chamber system when cocultured with the cancer cells. We showed that oxygen gradients, NOS2 and COX2 expression patterns, and macrophage homing were similar in the REEC model, spheroids, and tissue samples. Additionally, we demonstrated that standard anti-inflammatory treatment shifts the oxygen gradients by changing cellular oxygen consumption rates and modifying the spatial distribution of the expression of these proteins.

The REEC, because it incorporates cell-generated oxygen gradients, pushes 2D cell culture to be more physiologically relevant. In tumors these gradients play a role in metabolism, immune cell infiltration, inflammation, angiogenesis, drug uptake, and more. In our study the REEC provided a spatial context for the interactions of the inflammatory proteins NOS2 and COX2 in hypoxic gradients.  The biology we saw in the REECs is similar to that present in spheroids and tissue slices, model systems that are more difficult to interrogate microscopically. The REEC is powerful because it replicates key features of the TME, and its live-cell microscopy capabilities can be used in combination with immunofluorescence. It can also be integrated with spatial transcriptomics and multiplexed immunofluorescence microscopy. Additionally, we hope to incorporate different cell types into the model since the TME includes many immune cells and fibroblasts that also experience these gradients and shape tumor progression.

+1
Multiple Contributors
Anne Caroline Gilmore and Will Heinz
View all 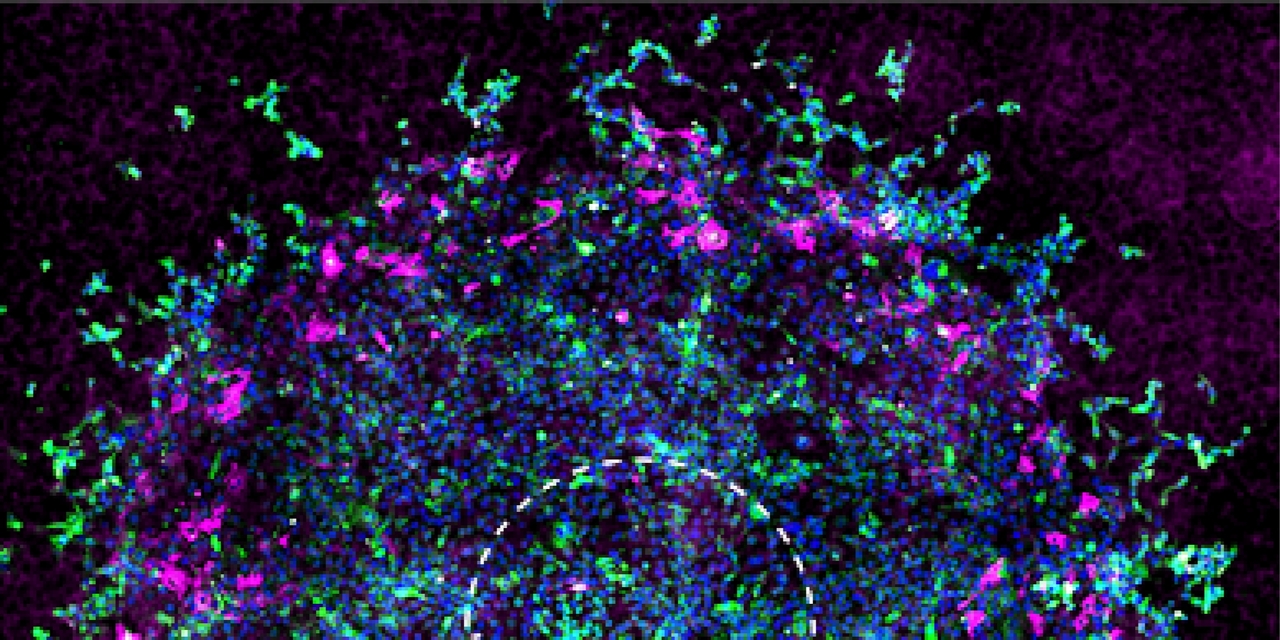 Oxygen gradients affect cellular processes and signaling pathways in the tumor microenvironment (TME). We present a live-cell chamber that replicates these features of the TME and demonstrate that breast cancer cells and macrophages self-organize and their phenotypes vary along hypoxic gradients.