A community from npj Precision Oncology
Contributor
On the road

In 2005, I joined Glenn Merlino Laboratory for my postdoc research. Something administrative was unusual: it was the secretary of Laboratory of Molecular Biology (LMB) who processed my paper works. However, when I reported to Glenn, I found I became a member of Laboratory of Cell Regulation and Carcinogenesis (LCRC). Not before too long I heard that Glenn was originally the PI of LMB but switched to LCRC to take the helm of acting Chief right before I came in.

Because of that, we were the only LCRC lab located in Building 37, while all the other labs were in Building 41. The joint meeting of LCRC took place every Thursday. I was always late on entering the gate of the newly built fence of NIH campus, running through the road in front of Building 45 toward my destination. There were some virus facility for vaccine study in Building 41, so I had to show ID and sign in at the checkpoint with a security guard. When I finally entered the conference room, I could only stand at the back and found all the doughnuts and coffee were gone.

There I saw Anita Roberts sitting in the front row. Her gray-silver, short but chic hair was so obvious. Anita was the former Lab Chief. I was told that she stepped down and recruited Glenn to run LCRC because she got seriously sick.

After one month, LCRC organized a retreat. It was a "real" one that took place in the nice beach town of St. Michaels for three days, not like nowadays so-called "retreat" is just a meeting in another conference room. Those were the good old days. After a day's meeting and brainstorming, we drank and chatted by campfire in the evening. I still remember that Anita held a beer, sitting on a short wall with legs crossed. She looked relaxed. I approached her to have a few chats.

Anita was still coming to her lab and mentored her people. She turned LCRC into a big family with everyone knitted together. I got very few chances to talk to her or even with mates from any other lab. However, it was so easy to see Anita loved her people and was well loved. As the daily routine of LCRC went by, I had some optimistic illusion that she was recovering from the terrible disease and would enjoy retirement. That should be the reason that she recruited Glenn.

In December, LCRC organized the holiday party in a NIH-owned house. It is a real family house that exhibits living room, kitchen, bed and guest rooms, and fireplace. People took their family and food to join, making the event no different from a regular Christmas dinner in any American house. The climax of the party happened after the pot-lock dinner, when Santa walked out carrying a big bag. All the children ran to him and received a gift bag. The Santa was not typical- tall and slim with the white mustache that did not quite match the long face well, because he was Anita's husband Bob. Later I learned that Bob always played Santa in LCRC's holiday party.

Everything was still running like a routine. I was still late in almost every joint lab meeting on Thursday morning. In Building 37 we discussed Ras and Cdkn2a, and in Building 41 every project was about TGF-beta. I naively thought this would continue for the next five years, probably, and I could consider my next step at that time. However, in the spring of the new year I heard that Anita stopped coming to her lab. Finally, I understood she had gastric cancer; and it was spreading rapidly in her now. Folks in Building 41 could not hide their worries and sadness.

Anita passed away on May 26th, 2006. Even though I had heard so much about her, looking at her hair from the back of the conference room many times, I chatted with her for only once in the retreat at St. Michaels before I got more chances. The service in the funeral house was short because most attendees could not bear the truth any longer that Anita was gone. I saw my friend could not stop weeping; she had been mentored by Anita for three years. Not to mention those who had been around her for decades.

Since that day, three PIs left LCRC, and only three remained. The unit downsized dramatically, and the future suddenly became uncertain. Three Lab Chiefs Glenn, Stuart Yuspa, and Beverly Mock, together with the PIs of their Laboratories made a smart move: merging three units to form Laboratory of Cancer Biology and Genetics. Glenn and PIs managed to move all the LCRC laboratories to Building 37 from Building 41, so all the LCBG laboratories consolidated in one place. LCBG immediately became the biggest Laboratory in NCI. The repertoire of its research includes every step of cancer progression, from initiation to metastasis, fitting its name pretty well. As TGF-beta is critical in this process, its study still has the stellar status in LCBG. We have turned the page, and I believe Anita would like the new picture.

For former LCRC staff, Anita's legacy should not be left fading in the temporal-spatial change. They were thinking of a permanent way to pay tribute to her. Dr. Lalage Wakefield came with the idea: building a garden that Anita would like in front of Building 37. In a way, Anita's place should have consolidated together with LCBG, like all other LCRC PIs. Lalage and other colleagues raised funds and got involved in the design for this project. They remembered, when Anita traveled to Atlanta, she saw a statue of a thinking frog in the Botanical Gardens. She loved it so much and told everyone about that. Many years had passed since then, but they managed to find the sculptor. He welcomed the idea- he had just lost his wife to breast cancer, so it was doubly meaningful for him, too, to place the frog outside the NCI’s main research building. There also should be trees and flowers that Anita would like.

A year later, the construction of Anita's garden was completed. In that triangle area, a frog sits on the short wall, posing like Rodin's "Le Penseur". The two trees weave their branches behind the frog when the breeze passes by, with some wildflowers around them. Two lovely sets of tables and chairs are placed under the trees. There is a small stone plaque with Anita's name on it. It doesn’t have to be obvious, because the pattern on the ground already tells the main story: the schematic secondary structure of TGF-beta. It is Anita's ribbon. I believe the sculptor will like that it is also similar to the breast cancer ribbon.

Since its completion, so many people have been there to eat lunch or have a chat with a friend. It is also a spot for a tired postdoc to take a break and enjoy the nice weather after a long day. The frog becomes the mascot of Building 37. "Let's meet up in front of the frog" is part of the daily conversation now. However, Anita's ribbon is ignored by almost all the visitors of that corner.

I don't think Anita would mind it. She had made a difference for so many people and in so many things, and even inspired people to build such an elegant while creative garden. A famous quote in Chinese literature is, "The peach and plum trees don't have to talk to attract people. (桃李不言，下自成蹊)"- because they give. Every some time in each summer, I’d see a hummingbird visiting the flowers and trees. I'd rather think it's a messenger to tell us Anita is smiling.

Anita with “Frog the Thinker” statue at the botanic garden in Atlanta.

Anita B. Roberts Contemplation Garden in front of Building 37.

Closer look at “The Green Thinker”.

Frog the Thinker is looking at Anita’s Ribbon. The diagrammatic secondary structure of TGF-beta is shown at the lower panel. 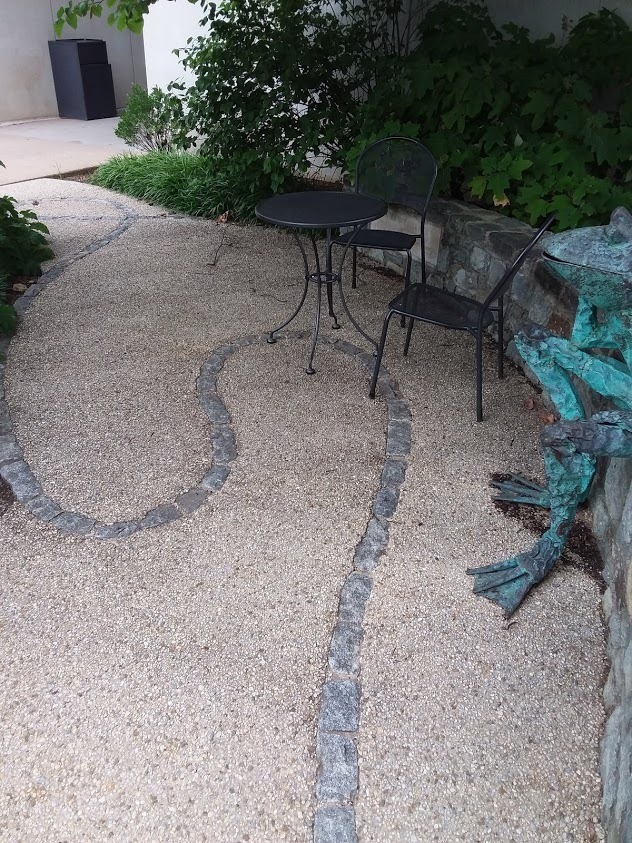