A mass spectrometry–based approach is used to investigate the mechanisms by which different NUP98 fusion proteins cause leukemia, revealing that the fusion proteins share common interactors and alter the composition of nuclear condensates.

Fusion proteins are often strong oncogenic drivers. In acute myeloid leukemia (AML), sequences of IDR-containing proteins (IDPs) are frequently fused to effectors with roles in gene control. The IDR-containing N-terminus of Nucleoporin 98 (NUP98) is fused to >30 partners, and NUP98-fusion-expressing AML is associated with poor prognosis.

While our laboratory has been focusing on the investigation of molecular mechanisms underlying cancer development driven by oncogenic fusion proteins for several years, we have not been studying biomolecular condensation in that context. The initial hypothesis of this project claimed that different NUP98-fusion proteins share oncogenic mechanisms through engaging in common protein-protein-interactions. To investigate this, we performed affinity purification coupled to mass spectrometry to identify the binding partners of five different NUP98-fusion proteins that are found in leukemia. This dataset revealed a large overlap of shared protein interactors. Around the same time, several publications linked biomolecular condensation to cancer and other diseases at the cellular level (Boulay et al., 2017; Patel et al., 2015). Intrigued by these findings, we found that the NUP98-fusion protein core interactome was significantly enriched for IDPs and proteins described to be able to undergo LLPS in vitro. This was in line with the subcellular localization of NUP98-fusion proteins, which were found in nuclear puncta that had previously been termed GLFG-bodies (Griffis et al., 2002). Following up on these initial results, we sought to develop tools to investigate if biomolecular condensation is involved in NUP98-fusion protein-driven oncogenesis. We made use of the small molecule biotinylated-isoxazole (b-isox), which is able to specifically precipitate IDPs in vitro (Kato et al., 2012), to develop biotinylated isoxazole condensome mass spectrometry (biCon-MS), which represents an MS-based method to chart the condensome of any given cell in an unbiased fashion. biCon-MS analysis of AML cells yielded specific enrichment of proteins that were previously described to form condensates in vitro and in vivo. In addition, this method identified a plethora of proteins that had not previously been associated with biomolecular condensation. Using biCon-MS, we demonstrated that expression of NUP98-fusion proteins significantly alters the global composition of the condensome of leukemia cells.

Based on our results, we postulate that the biochemical and biophysical properties encoded in the NUP98 N-terminus are sufficient to induce a specific leukemic gene program essential for oncogeneic transformation when fused to a partner that is capable of gene regulation, such as KDM5A, NSD1 or HOXA9 (see Figure). Alteration of biomolecular condensation induced by oncoproteins in cancer is most likely not restricted to NUP98-fusion proteins. Indeed, a recent report claimed that disease-associated proteins are enriched for phase separation propensities (Tsang et al., 2020). In line with this, we found that fusion proteins in cancer are highly enriched for factors with a strong potential to phase separate. More work will be required to establish the concept of cancer-specific biomolecular condensation to enable the development of novel efficient targeting strategies. 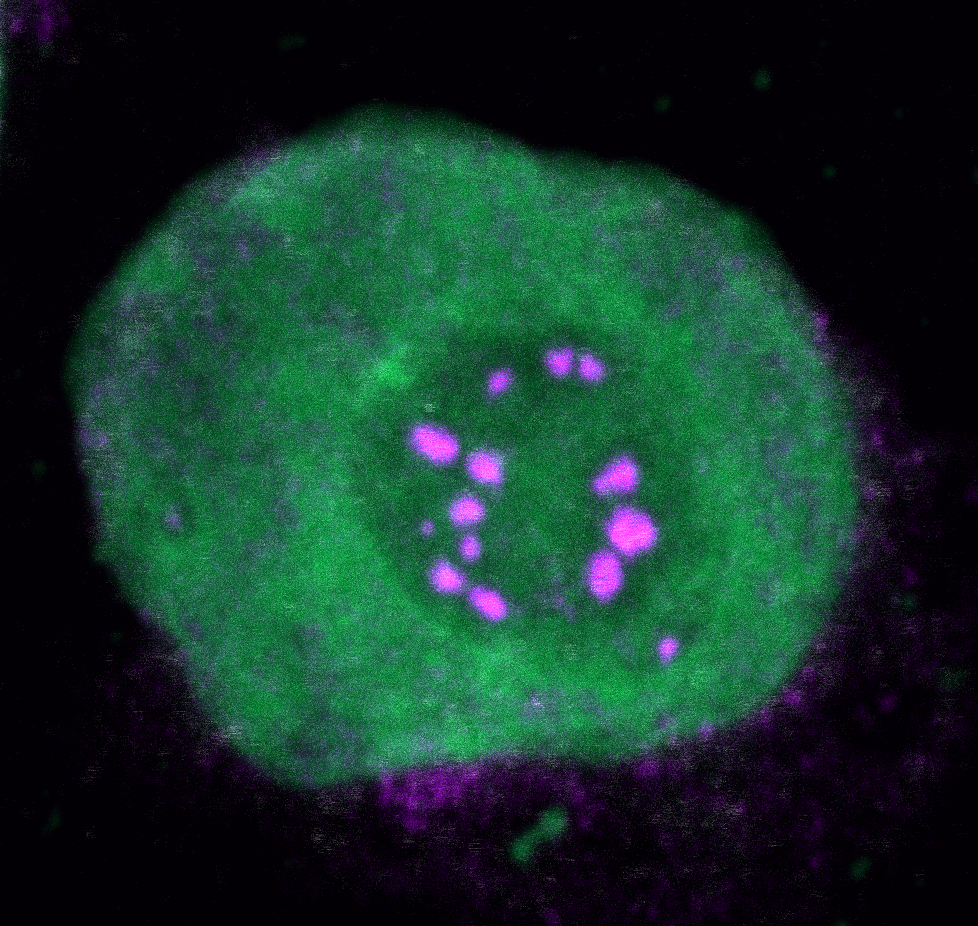