Pathogenic bacteria function as tumor activators or carcinogens via secreting different types of effector proteins also named toxins into host cells. These effectors enable to disrupt the regulation of cell death, cell proliferation, or inflammation. In 1910, William Coley first found that culture supernatants of Streptococcus Pyogenes and Serratia Marcescens could trigger tumor suppression and patients treated with these substances turned to recovery from cancer. Since then, applying engineered bacteria or bacteria effectors to disturb tumor cell motility and growth has been a potential alternative and interactive cancer therapy. Although this strategy has been explored for more than a century, the lack of detailed and mechanistic information on the interaction between bacteria effector and host proteins hindered its development. I am really interested in this field. So after I completed my postdoctoral training in the bacterial type III secretion system (T3SS) field in Babis Kalodimos lab at St. Jude Children’s Research Hospital, I started my lab at Hubei University and entered into the field of bacteria-host interaction and aim to make our contribution.

It has been well-established that pathogenic bacteria enable to kill host cells mainly by triggering apoptosis or pyroptosis. While the tumor suppressor p53 can intervene in all the major steps of cell cycle arrest and apoptotic pathway. As a nuclear transcriptional factor, functionally active p53 steers the expression of multiple cell fate determinators, including the apoptosis regulator Bcl-2-associated X protein Bax and the cell cycle inhibitor protein p21. These downstream effectors assist p53 to fulfill its pro-apoptotic function. Notably, p53 mutation and inactivation have been found in above 50% of human cancers and lead to a continual unregulated proliferation of tumor cells. Owing to the critical function of determining cell fate, the lifetime and basal level of p53 are strictly regulated. This regulation is primarily monitored by ubiquitin-mediated protein degradation. In cells, intact p53 is directly targeted by ubiquitin E3 ligases such as Mdm2 or COP1 for ubiquitination and proteasomal degradation. During bacterial infection, targeting p53 activation and stabilization is a common strategy for bacteria to trigger host cell lysis to release bacteria. Meanwhile, this feature makes p53 to be a promising target for the development of the anticancer drug derived from bacteria. Considering this, we made our decision to focus on the p53 protein as a host target.

Increasing evidence highlights the potential of bacterial effectors targeting p53  in cancer therapy. Among the reported candidates, azurin is one of the most important and well-studied proteins. It is a 128-amino acid redox protein secreted by an opportunistic pathogen, Pseudomonas Aeruginosa, which consists of an immunoglobulin fold and an α-helix protein transduction region (L50–D77, p28). This effector protein has high selectivity and cytotoxicity to various human cancer cells, including breast cancer and melanoma, making azurin and its derivatives an alternative route to cure cancer. Currently, two regions of azurin have been explored as the hotspots for membranolytic anti-cancer peptide development, the p28 region and CT-p26 region (V95-L120), respectively. Notably, the azurin-derived peptide, p28, has been approved by FDA as an orphan medication for treating glioma and validated the safety and anticancer activity in adult as well as pediatric patients.

Numerous studies have shown that azurin and its derived peptides preferentially penetrate tumor cells and trigger apoptosis by stabilizing functional active p53. The lack of structural and mechanistic information on the p53-azurin complex has limited our understanding of azurin-regulated p53 stabilization and impeded the development of new anticancer azurin-derived peptides. Therefore, we set up our first goal to reveal how azurin specifically recognizes p53 and stabilizes it from degradation.

The initial trials were set to characterize the p53-azurin interaction. Using state-of-the-art solution NMR, we found that azurin merely binds to the DNA binding domain (DBD) of p53. This specific interaction is highly transient in vitro, which makes it significantly challenging to acquire the structural information. By combining solution NMR and X-ray crystallography, the structure of azurin in complex with human p53 was determined at 2.1 Å resolution. In the structure, the stoichiometry of the interaction is 1:2 instead of the reported 1:1. One azurin docks onto a highly complementary triangle groove formed by DBD dimerization. The p28 region of azurin makes a major contribution to the complex stabilization. Mutations located at the interface and involved in the interaction dramatically decrease the interaction.

Theoretically, higher affinity would improve the anti-cancer efficacy and specificity. To reveal the clinical significance of the azurin-p53 interaction, we sought to stabilize this transient complex by structure-guided mutagenesis design. Benefiting from our high-resolution structure, all the intermolecular contacts can be captured in confidence, which provides solid information for our mutation design. The designed azurin mutants turn out to be more favored for p53 binding compared to azurin. Cell treated with these mutants upregulates p53 levels as well as p53 downstream effectors, Bax and p21, which induce apoptosis or cell cycle arrest, respectively. Significantly, these affinity-enhancing mutations elevate the rate of cell death.

Taking together, this published work has provided atomic insight into the structural and mechanistic features of p53 stabilization induced by a bacteria effector azurin. The structure-guided mutagenesis affirms the structural and functional results and provides a successful template for designing azurin or p28 derivatives with greater anti-tumor potentials.

Our lab focus on revealing the interaction and function of bacteria effector and their host targets. We have expertise in combining multiple techniques from structural biology to cell biology. 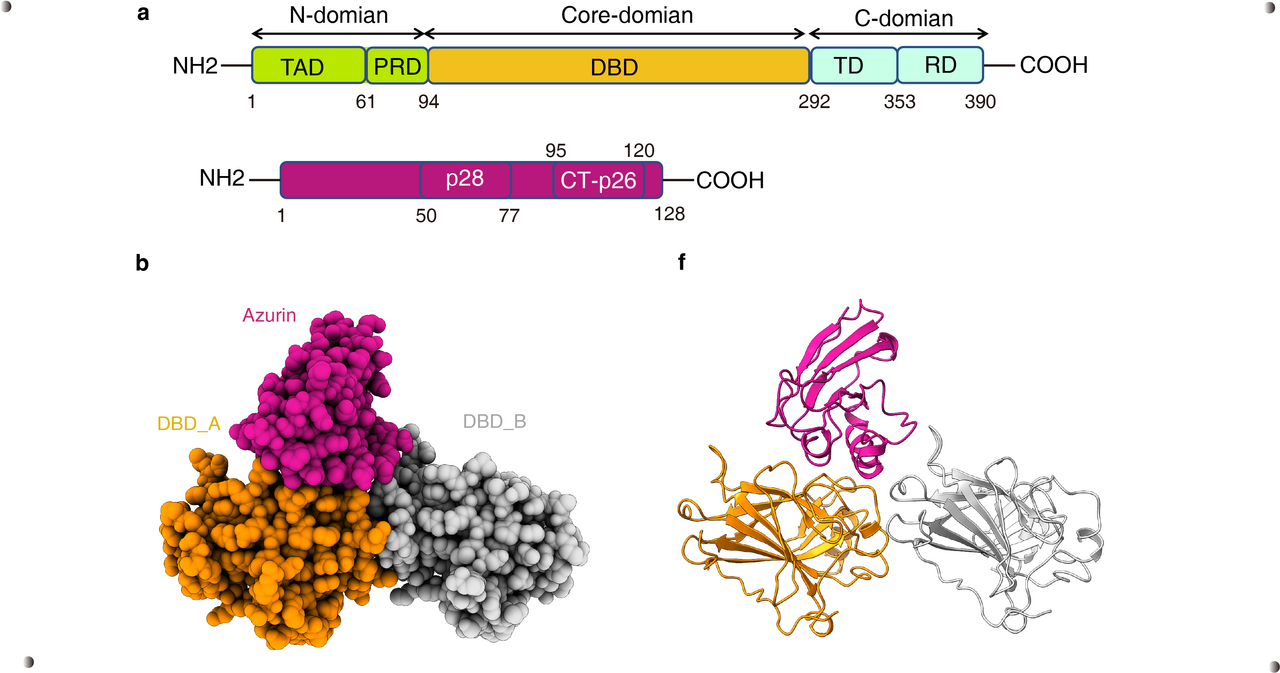