Vaccination has been one of the main milestones of modern society, achieving the eradication of infectious diseases. The recent Covid-19 outbreak, remarked importance of vaccine. Specifically, it was the trigger point of mRNA vaccines, which are expected to shift the paradigm of cancer treatments.

The current paradigm of the pandemic due to the SARS-CoV-2 virus seems to have relegated to oblivion the devastating mortality figures of other diseases of enormous impact on society. In particular, research on cancer treatments and therapies seems to have lost prominence in the past year. However, the boom of vaccine development against COVID and its recent success has opened the doors to the development and clinical phase of immunotherapies against cancer.

Over the years, cancer treatments have evolved in various directions, ultimately focusing on the relationship between the patient's immune system and the tumor. The firstly investigated therapies involve the immunomodulation of the tumor environment through the administration of cytokines - such as IL-2 and IFN-a- and later, antibodies. The different mechanisms of action of this strategy led to the administration of monoclonal and bispecific antibodies or combinations with other drugs that sought to generate a long-term immune response. Currently, there is a wide variety of drugs based on the use of antibodies like immune checkpoint inhibitors. However, the limited efficacy and numerous adverse effects led the research to turn to adoptive cell transfer therapies. Adoptive cell transfer (ACT) involves the administration of self-T cells, previously engineered ex vivo to include stimulator anticancer activity and then infused into the patient. Promising therapies are included within this strategy like TCR, CAR-T cells, or TIL therapy. Due to immune issues, with the current state of the art, these therapies are autologous, thus personalized for each patient. The high cost of the therapy and its difficult manufacturing, together with the risks associated with adverse effects, show that there is a long way to go in the design of adoptive cell therapies.

Recently, an improved understanding of the complex relationship between the immune and tumor cells present in the tumor environment has generated increasing interest in the development of cancer vaccines. Likely to vaccines for infectious diseases, the aim is to stimulate the host’s immune system by activating T cells. The difficulty lies in the identification of universal antigens typical of the tumor type, due to the heterogeneity of the latter. As a result, the evolution of anti-cancer vaccines ranges from the administration of proteins and peptides to the administration of genetic material. In particular, the administration of mRNA cocktails coding for various tumor antigens has shown high efficiency. In addition, the innate immunogenicity of RNA, as well as its inability to integrate permanently into the genome, predicts the design of effective and safe vaccines. Supported by the present results of similar vaccines for the treatment of COVID, this field offers enormous interest for oncology.

However, the fragile nature of mRNA poses a challenge for its administration; it needs to be encapsulated to protect it from degradation during the process. Large pharmaceutical companies have opted for the use of conventional nanocarriers such as lipid particles. But the toxicity of these particles has compromised their performance. In our group, we work for the development of biocompatible and biodegradable polymers, with a high encapsulation capacity, which allows us to work within the limitations of current vehicles.

The use of cationic polymers for the complexation of genetic material (siRNA, mRNA, pDNA) and proteins is a field of great interest for biomedical application. The design of our poly (beta-amino ester) polymers has shown high transfection efficiency in both in vivo and in vitro assays, including capacity to immunize mice models when using antigenic mRNAs; being a versatile and easily modifiable platform that promises impressive results in the near future treatments of cancer. 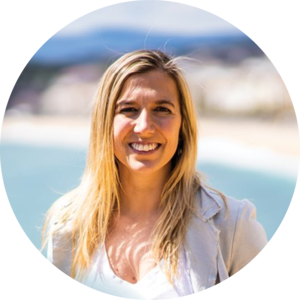