This project was a great human adventure and we hope that our work will facilitate awareness of the risks associated with shift work and all types of chronic circadian stress on health, in particular for the prevention and follow-up of cancers.

The seed of this study germinates in 2014, when I joined the ESTeam laboratory, in Villejuif, close to Paris. The proximity of the team of Pr. Francis Levi, who works for many years on chronobiology and chronotherapy, and our scientific exchanges led me to dedicate part of my research project on this topic. I had then the chance to recruit Eva Hadadi, who came to do her post-doc on this project after her PhD on monocyte biology. We were first interested in the link between the periodic oscillations of the circadian rhythm and the ability of cells to respond to the induction of epithelio-mesenchymal transitions (EMT). To our surprise, we saw that one phase of the circadian rhythm was pro-EMT and another anti-EMT. The pro-EMT phase was also associated with greater stemness of the mammary epithelial cells that we used in these experiments. It was therefore possible that an alteration of the circadian clock was able to modulate the properties of mammary epithelial cells and in particular their adhesion, migration and stemness properties. These characteristics are part of the hallmarks of cancer described by Hanahan and Weinberg [1]. It could therefore also have a strong implication during tumor progression. We then thought of an experimental model that would allow us to best assess whether a disruption of the circadian clock had an effect on the progression and malignancy of breast tumors. Once again, the collaboration with Pr. Levi’s team helped us a lot to define and optimize a protocol mimicking shift work by repeated jet-lag (every other night lasts 4 hours instead of 12) [2]. We then validated this protocol and applied it to mice spontaneously developing mammary tumors (line MMTV-PyMT [3]). It was interesting for us to be able to achieve circadian stress over a long period of time, thus reproducing what has been observed in nurses working at night, where long exposure to shift work significantly increases the risk of breast cancer [4]. The MMTV-PyMT model was also interesting because it reproduces the different phases of tumor progression, starting at puberty, when the MMTV promoter becomes active. Depending on the genetic background used, it is possible to act on the penetrance of the phenotype, thus making it possible to study tumor progression over a relatively long time for the murine species (20 weeks). We then characterized the phenotype of the mice and observed that a chronic circadian disruption, through continuous jet lag, moderately affects primary tumor growth but significantly promotes cancer-cell dissemination and metastasis. [our study, 5].

This project was a great human adventure and we hope that our work will facilitate awareness of the risks associated with shift work and all types of chronic circadian stress on health, in particular for the prevention and follow-up of cancers. To my surprise, we got very positive feedback from non-profit associations and fundations (Vaincre le Cancer, Institute of Cancerology and Immunogenetics ICIG, GEFLUC Les Entreprises contre le Cancer, Fondation de l’Avenir), which mainly funded the project. Thanks to GEFLUC Les Entreprises contre le Cancer, we met Sylvain Provot, with whom we then collaborated to better characterize the phenotype of bone metastases of mice. 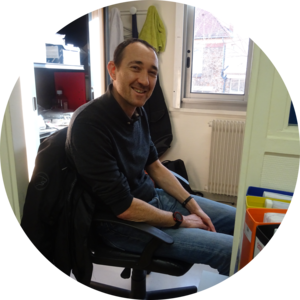