+1
Mette Dahl and 1 other View all
Medical Doctor, Rigshospitalet
Follow 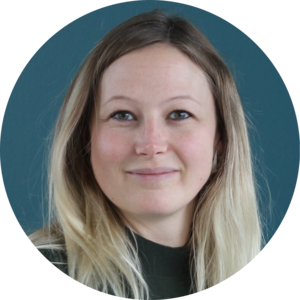 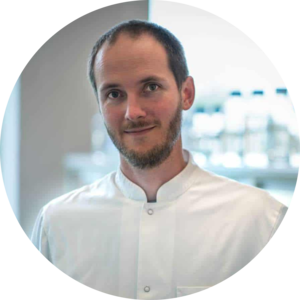 Mantle Cell Lymphoma (MCL) may present with an indolent clinical course where treatment may be deferred or as a highly aggressive disease with short survival despite intensified chemoimmunotherapy1,2. With an increasing number of treatment options available, clinicians more than ever need useful biomarkers to support decision-making.

The prognostic index MIPI3 has been refined by incorporation of  the cell proliferation marker Ki674 into  MIPI-C5, but inter-observer variability remains a caveat for the use of this biomarker in clinical practice6. Recently, biological biomarkers such as  gene expression signatures7,8 as well as somatic mutations9, in particular those found within the TP53 gene10,11, have shown prognostic impact in MCL. But what if we look beyond gene expression signatures and mutations?

In this study, we examine the expression patterns and prognostic potential of circular RNAs (circRNAs), a class of endogenous and abundant non-coding RNA molecules, in MCL. These gene-regulatory molecules display tissue- and disease specific expression patterns12,13, are highly stable molecules compared to mRNAs14, and might be implicated in carcinogenesis15. These features support a role for circRNAs as prognostic biomarkers, but their potential has not previously been explored in MCL.

The Nordic lymphoma group previously conducted the two clinical trials MCL216 and MCL317, which led to establishment of cytarabine-containing chemoimmunotherapy and autologous stem cell transplant (ASCT) as a standard of care regimen for younger, fit patients with MCL18. We were fortunate to have RNA samples available from approximately half of the 319 patients enrolled in these two trials along with clinical data with long follow-up time. This valuable material provided a unique opportunity to examine the prognostic significance of circRNAs in MCL.

As is often the case when carrying out research, we encountered obstacles. As we initiated the project, no reliable methodologies for accurate quantification of circRNAs from archival tumor samples such as formalin-fixed paraffin-embedded (FFPE) tissues, were available. Therefore, we first carried out another study, in which we identified the Nanostring nCounter technology as a specific and sensitive methodology for circRNA quantification compatible with the use of RNA isolated from clinical (FFPE) samples19. However, a limitation with this methodology is that assays has to be customized, thus one need to know, a priori, what to look for.

Because the circRNA expression landscape in MCL has not previously been characterized, the first step, in the current study, was to perform a genome-wide profiling of circRNAs in MCL with RNA-seq. Since this technology does not allow for circRNA quantification in FFPE samples, we used high quality RNA isolated from snap-frozen lymph nodes of 14 patients with MCL and included six healthy controls for comparison. Interestingly, we show that circRNA expression is inversely correlated with Ki67, indicating that the highly stable but slowly generated circRNAs may not reach steady-state levels in the fast proliferating MCL cells. 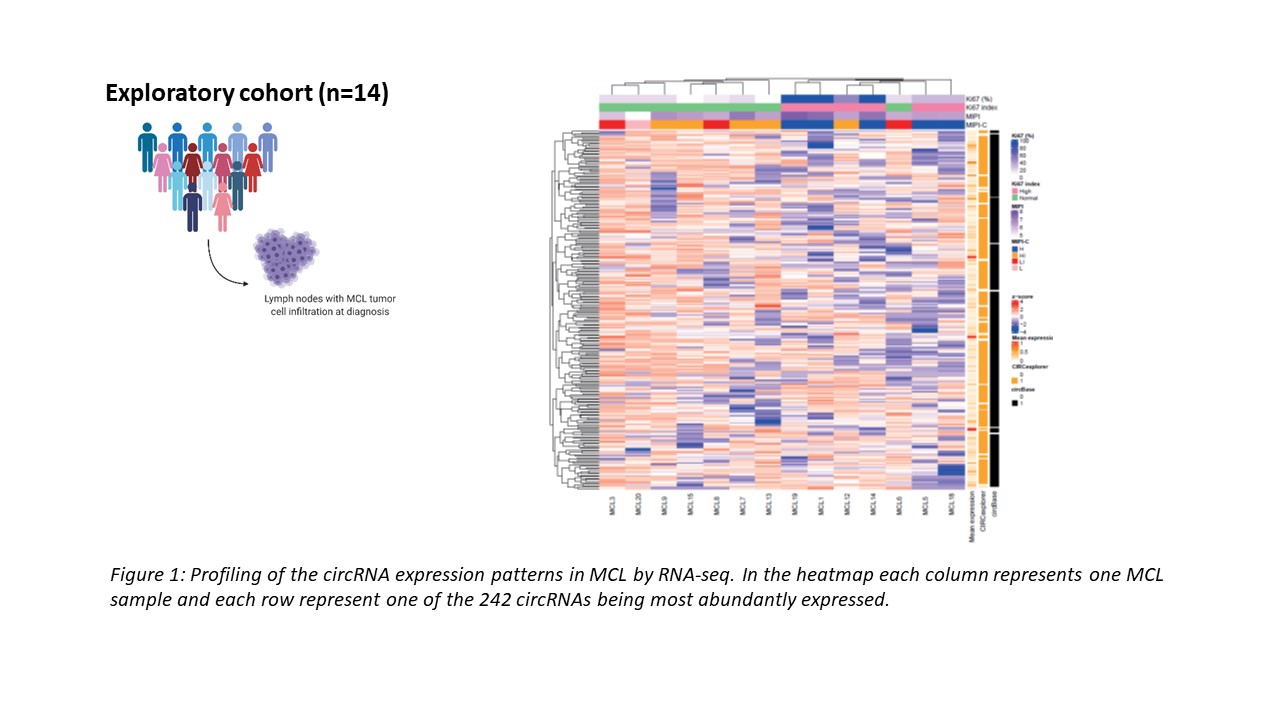 From the RNA-seq data, we selected 40 unique circRNAs, for which we designed assays for quantification using the Nanostring technology and assessed their expression levels in RNA samples from the MCL2 and MCL3 cohorts. To examine the prognostic potential of these circRNAs, we defined MCL2 (n=74) as our training cohort and MCL3 (n=89) as our validation cohort and used a machine learning approach, the least shrinkage and selections operator (LASSO), to identify the circRNAs most predictive of time-to-progression (TTP) in MCL2. 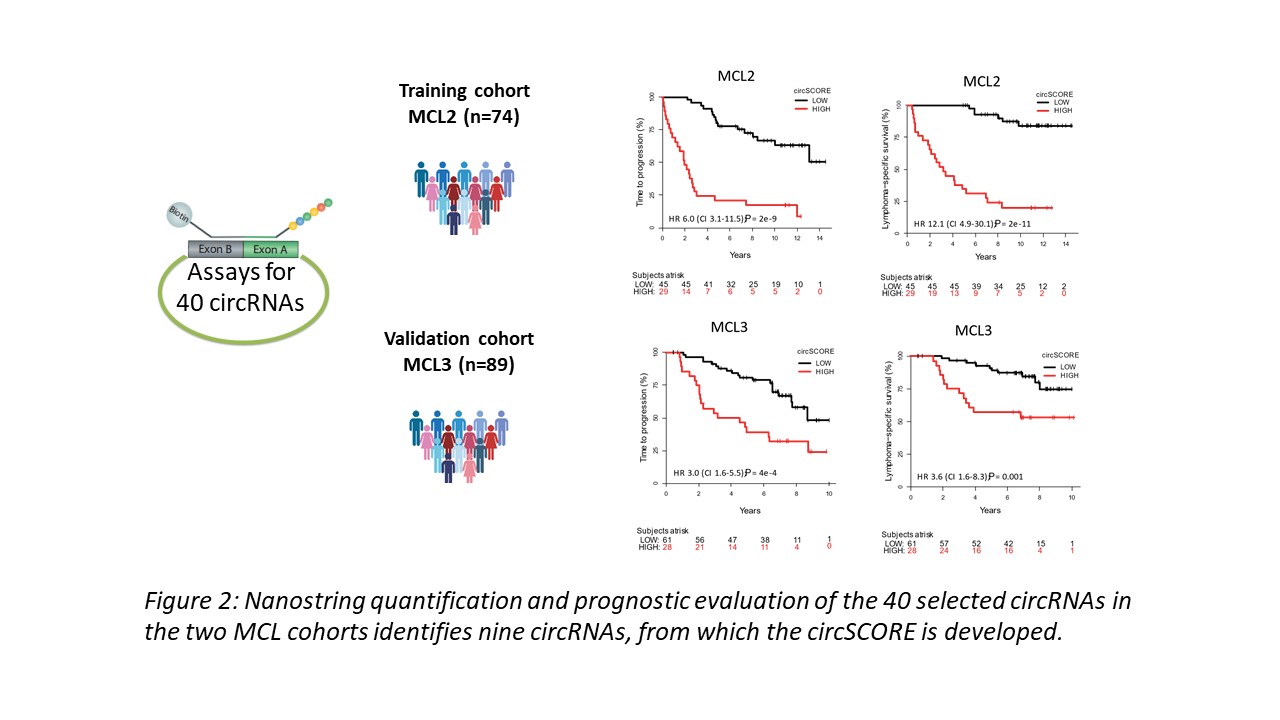 Nine circRNAs were identified as predictive in the LASSO model, and from these, we calculated a risk score (circSCORE) for each patient in MCL2 and MCL3 and stratified patients into two groups. We show that circSCORE is highly predictive of outcome in MCL, as patients with a high circSCORE have significantly inferior TTP and lymphoma-specific-survival (LSS) compared to patients with a low circSCORE.

Interestingly, circSCORE retains prognostic impact for both TTP and LSS even when incorporating known prognostic factors such as Ki67 index, MIPI risk group and presence of TP53 mutations. Furthermore, our study indicates that circSCORE might also be a valuable biomarker in a TP53wt setting, but further studies in larger cohorts are needed to ascertain this finding. Because circSCORE is assessed by Nanostring, a potential for seamless implementation of a circRNA-based biomarker into clinical practice, exists.

In conclusion, we provide the first map of circRNA expression in MCL and show that circSCORE is a novel biomarker in MCL with a remarkable potential.

CEA increase as a marker of disease progression after first-line induction therapy in metastatic colorectal cancer patients. A pooled analysis of TRIBE and TRIBE2 studies