Earlier this year, we discovered that total levels of circulating cell-free microRNAs (cf-miRNAs) in plasma can stratify patients who are most at risk of progressive breast cancer. In this paper, we hypothesized that total cf-miRNA levels might also be indicative of outcome in  ovarian cancer (OC).

The Problem with Ovarian Cancer

OC is a very aggressive disease, with a 10-year survival rate of less than 30%. Since most cases are diagnosed at a late stage, it is imperative to identify novel biomarkers which could predict the onset of disease earlier, leading to a better outcome. Additionally, there is an unmet need for implementing biomarkers which can predict disease progression and survival. Until now, the protein biomarker CA-125 is the "gold standard" for diagnosis and monitoring, but lacks both sensitivity and specificity.

Therefore, a combination of novel biomarkers is a promising strategy to improve the current diagnostics and monitoring, leading to a better outcome for OC patients.

At first, we took a group of OC patients (n = 100) and tested whether the levels of cf-miRNA were associated with disease severity, as we have previously shown in breast cancer. Indeed, patients with higher levels of cf-miRNAs were likely to have adverse clinical features and a significantly increased risk of death which was confirmed as an independent prognostic factor in multivariate analysis.

A major hurdle to implementing cf-miRNAs as a diagnostic tool in the clinic, is the high technical variability and the lack of standardization in qPCR. For this reason, we decided to use publicly available NGS data, as an unbiased approach to seek out biomarkers. Using multinomial logistic regression, we came to a 7-miR signature which could distinguish controls from OC cases with an AUC of 0.87.

Finally, by combining the current gold standard marker, CA-125, with the 7-miR signature, we could detect OC with an AUC of 0.97 and 0.93 for early cancer cases.

This is the second study where we have highlighted the potential of just the levels of cf-miRNAs as a biomarker which could be easily adopted to the clinical setting, requiring very little patient blood and tools. Moreover, the simple 7-miR panel has great potential to be used in combination with CA-125 to improve current diagnostics for OC.

Since the majority of OC cases are diagnosed in late stage, when outcome is severely compromised, we believe this work strengthens the implementation of miRNAs as novel liquid biopsy markers in OC.

Cancer researcher based in Heidelberg, Germany. 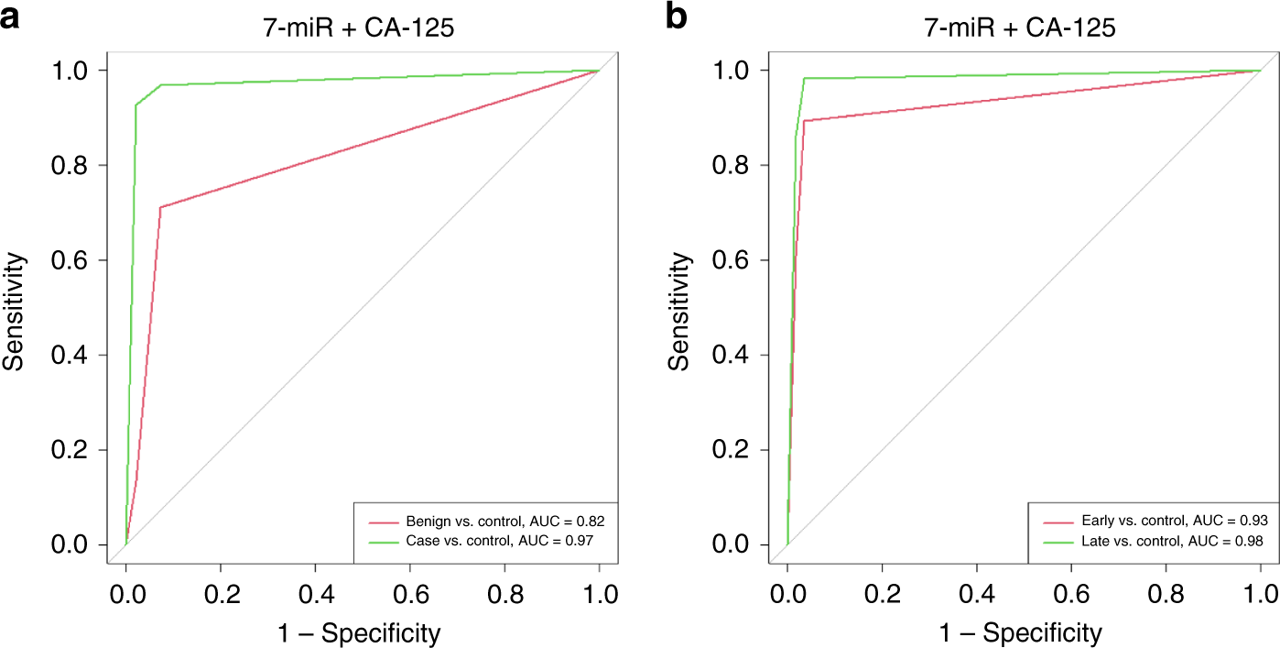