In early stage non-small cell lung cancer (NSCLC), tumour recurrence post-surgery occurs in  ~50% of cases and most commonly at distant sites1.  Tumour cells that invade through normal tissue and enter the blood stream can travel around the body and although this is an assumed route leading to metastasis, it has not been formerly demonstrated in humans.  Identifying circulating tumour cells (CTCs) in cancer patients’ peripheral blood, especially those with apparently localised disease, is technically challenging and akin to searching for a “needle in the haystack” of blood cells2. We reasoned that the number of CTCs in the vein that drains the cancerous lung, just prior to tumour resection with curative intent, might reflect risk of subsequent disease recurrence, with pilot data to support this hypothesis3. We also hypothesised that molecular analysis of both single CTCs leaving primary tumour and of a subsequent metastasis represents a potential means to identify those tumour cell clones ‘fit’ enough to survive the circulation and seed secondary tumours. We set out to test both hypotheses within the TRACERx consortium.

Thanks to the TRACERx nationwide team effort, including adoption of pulmonary vein (PV) blood sampling at surgery, we enriched and enumerated epithelial cells from the PV of 100 patients. These putative tumour cells were found in 48/100 patients and their prevalence was associated with poorer disease-free survival, confirming our pilot data. Whilst analysis in a larger cohort is required to validate this finding, the implication is that epithelial cell number in the PV at surgery could identify those patients at higher risk of relapse who need more frequent monitoring with serial ctDNA analysis4. We also discovered across the patient cohort that the majority of epithelial cells in the PV blood harboured few or no genomic aberrations. This mixed population of ‘bona fide’ CTCs with cancer genomes and apparently normal epithelial cells in the bloodstream may have diluted the strength of lung cancer recurrence prediction. Further studies using more sensitive CTC technologies, including detection of both epithelial and mesenchymal single cells and cell clusters5, alongside a more comprehensive analysis of rare cell subpopulations are now warranted to better inform mechanisms of NSCLC metastasis.

Harnessing complementary research skills at the two Cancer Research UK Lung Cancer Centre of Excellence sites in Manchester and London, we undertook a TRACERx patient case study where next generation sequencing of single PV epithelial cells was performed and copy number and mutation profiles were compared with the resected and sequenced primary tumour and a metastasis that occurred 10 months after surgery to determine whether PV cells present at surgery seeded the metastasis. A higher mutation overlap was observed for PV cells with the metastasis than with the primary tumour, suggesting that early-disseminating PV-CTCs were responsible for disease relapse. The evolutionary origin of the PV-CTCs and metastasis was confirmed by phylogenetic analysis that revealed they shared a common progenitor.

Our study6, possible only due to the strong collaborative ethos of TRACERX researchers, based in clinics, surgeries and laboratories, suggests there is much to be learned from detailed analysis of early disseminating tumour cells in NSCLC.

Award winning poster on CTCs in NSCLC within the TRACERx study6 at the AACR 2018. 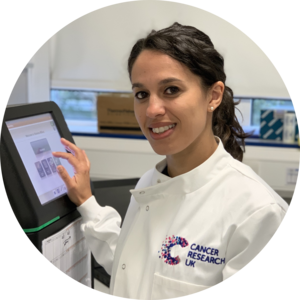