Myelofibrosis (MF) is a myeloproliferative neoplasm (MPN), whicharises at the level of hematopoietic stem progenitor cells (HSPCs) due to a series of mutational events that result in activation of JAK/STAT signaling 1, 2. The driver mutations associated with MF involve JAK2, calreticulin (CALR) and the thrombopoietin receptor, MPL 1. JAK/STAT signaling has served as the primary target for MPN specific drug development and has led to the approval of two small molecule JAK2 inhibitors, ruxolitinib and fedratinib, which are the only drugs currently approved to treat MF patients.  These drugs, although capable of improving patient symptom burdens, have a modest effect on prolonging patient survival 3, 4. These limitations of JAK2 inhibitor therapy are likely due to their lack of specificity resulting in the inhibition of both mutated and wild type JAK2 and the accompanying JAK2 oncogenic activation 3-6. Furthermore, the majority of MF patients become resistant or intolerant to ruxolitinib therapy after approximately 3 years 7. Thus, the identification of additional novel approaches to treat MF clearly represents an unmet need. It is anticipated that a successful strategy for treating MF patients that would culminate in a substantial improvement in overall MF patient survival would ultimately require depletion or elimination of malignant HSPCs, emergence of normal hematopoiesis and be accompanied by modest hematological and non-hematological toxicity.

Increased expression of MDM2 has been previously observed in MPN CD34+ HSPCs and that MPNs are characterized by WT TP53. We have shown that MDM2 antagonists termed nutlins can selectively eliminate MPN CD34+ cells by activating the p53 pathway,  We have also reported a phase 1 trial of the oral nutlin, RG7388 (idasanutlin), in polycythemia vera (PV) patients intolerant or refractory to hydroxyurea or interferon therapy, which resulted in hematological responses, reduction in the degree of splenomegaly, an improvement in symptoms and a reduction in the JAK2V617F variant allele frequency (VAF) 8. Additional trials of MDM2 antagonists in MF patients have led to reductions in spleen size, improvement of systemic symptoms and reduction in the VAF of MPN driver mutations. Unfortunately, the chronic administration of idasanutlin in PV, leukemia and solid tumor patients has been limited due to gastrointestinal toxicity, which led us to search for alternative drugs which target different pathways to partner with a nutlin with the goal of developing a more effective and tolerable stem cell depleting therapy for MF patients.

The oral imipridone, ONC201, triggers apoptosis by activating the extrinsic apoptosis pathway 9-11. Recent studies have shown that ONC201 increases TRAIL, DR4 and DR5 at both the transcriptional and translational levels by inactivating the AKT/ERK pathways and leading to upregulation and translocation of Foxo3a into the nucleus where it binds to the TRAIL promoter to upregulate gene transcription 11. The actions of ONC201 on malignant cells are known to be independent of p53 12.

ONC201 has also been shown to be a potent allosteric agonist of the ATP dependent mitochondrial caseinolytic protease P (ClpP), which regulates oxidative phosphorylation by controlling the degradation of the respiratory chain components and triggering the mitochondrial unfolded protein response 13. Hyper-activation of ClpP by ONC201 increases mitochondrial proteolysis and leads to mitochondrial dysfunction, impaired oxidative phosphorylation and death of acute myeloid leukemia cells 14. The effects of ONC201 on AML cells are thought to be through its actions on ClpP rather than the TRAIL/DR pathway. Some studies have reported that ONC201 induces the atypical integrated stress response (ISR) in various types of malignant cells by activating transcription factor 4 (ATF4) 12, 14. The role of ONC201 in the treatment of MF has yet to be explored

In the most recent manuscript in Leukemia, Dr. Hoffman’s group reports the outcomes of in vitro studies  of CD34+ HSPC from 21 different MF patients which indicate that a combination of a nutlin and ONC201 serves as an effective therapeutic strategy to selectively target malignant MF CD34+ cells. This drug combination acts by inducing apoptosis through both intrinsic and extrinsic apoptosis pathways. Theyconfirmed that MF CD34+ cells express higher levels of MDM2, as well as lower levels of TRAIL and DRs as compared to ND CD34+ cells. The study showed that ONC201 alone enhances the effects of upregulated p53 in MF CD34+ cells and that there is a cooperative effect between ONC201 and RG7112 in increasing components of the death signaling  pathway (TRAIL and DR5) and levels of mitochondrial ClpP. We also showed   that this drug combination  might promote an increase in  ER-mitochondrial stress which would culminate in greater apoptosis of CD34+ cells  from MF patients. These effects were not observed when CD34+ cells from normal donors were studied in a similar manner Consequently, this combination therapy not only decreased colony numbers formed by MF progenitor cells but also reduced numbers of  malignant  progenitors that were JAK2V617F+. The ability of this drug combination to spare normal CD34+ cells might allow it to be better tolerated in MF patients that present with an MF related marrow failure state. Such a therapeutic approach would be anticipated to promote the elimination of both TP53-wild type and TP53-mutated MF HSPCs resulting in the depletion of MF but not normal HSPCs .The validity of this approach  can ,however, only be evaluated  in a clinical trial of this promising drug combination   in MF patients. 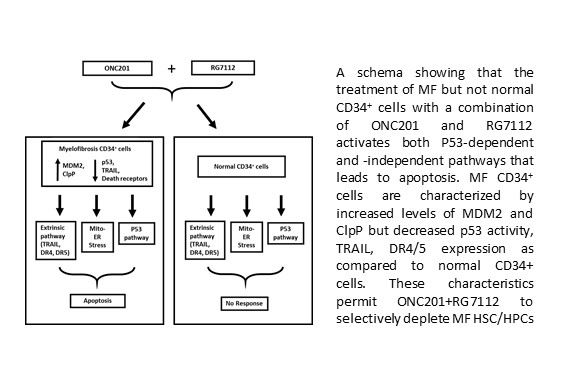