Multiple myeloma is an incurable blood cancer that arises from clonal expansion of malignant plasma cells in the bone-marrow. Major progress in myeloma treatment has increased median overall survival (OS) from less than 3 years in the late 90ties to more than 6 years as of today1. Some patients can now live 20 years with myeloma, and can thus be considered more of a chronic disease. Despite the general improvement of prognosis, nearly a quarter of patients have not benefited from the new-era drugs and continue to have a dismal survival of less than 2-3 years. There is a need for refinement of identification, treatment, and follow-up of these patients. The main current prognostic stratification system for myeloma is revised (R)-ISS staging, which score patient risk in three levels based on the level of β2-microglobulin, albumin and lactate dehydrogenase in serum, and the presence of high-risk chromosomal abnormalities. Although the recent inclusion of high-risk chromosomal lesions in the R-ISS, identifying the short-living patients is still a challenge, and improvement of early stratification of these patients could open for risk-adapted treatment and inclusion in clinical trials.

MicroRNAs (MiRNAs) are among the most studied groups of sRNAs, and play an important role in gene regulation in human tissues2. MiRNAs are about 22 nucleotides in length and repress gene expression by RNA silencing. In fact, miRNAs are predicted to regulate most transcribed genes in the genome by binding to the 3′ untranslated regions2.  MiRNAs are frequently dysregulated in cancers and may act both as tumor suppressors and oncogenes3. MiRNAs have become increasingly exploited as biomarkers for disease and are particularly suitable due to their stability in tissue, circulation and biopsy specimens4.

While miRNAs represent a highly studied class of sRNA, other types of sRNA have been largely overlooked. The sRNA landscape includes transfer RNAs (tRNAs), small nucleolar RNAs (snoRNAs), small nuclear RNAs (snRNAs), long non-coding RNAs (lncRNAs) and piwi-interacting RNAs, and all can be detected by sRNA-sequencing5. Recent years studies have revealed that sRNAs have  prognostic value and play functional roles in cancer6. For example, dysregulation of splicesomal RNAs (snRNAs), which are important components of the spliceosome, may affect splicing of tumor-suppressor or oncogenic transcripts7.

As miRNAs and sRNAs are promising markers for disease diagnosis and surveillance, we performed comprehensive sRNA-seq on CD138+ cells isolated from bone marrow aspirates of 86 myeloma patients in search for new stratification biomarkers in myeloma. We first characterized differential sRNA expression between disease stages. We detected seven significantly differentially expressed miRNAs, let-7c-5p, miR-125-2-3p, miR-125-5p, miR-3648, miR-3916, and miR-99a-5p, which were upregulated in stage III compared to stage I. One miRNA, miR-873-5p, was expressed lower in ISS stage III compared with stage I. Interestingly, among the other species of sRNAs we detected significant changes in seven snRNAs which was inversely correlated with disease risk (Figure 1). The snRNAs belonged to the U2 spliceosomal RNA class, although transcribed from different genomic loci. The implication of dysregulated expression of U2 spliceosomal snRNAs has not previously been characterized in myeloma, but aberrant RNA splicing has recently been related to high-risk molecular subgroups and poor prognosis8. There is thus a potential to further study the role of U2 snRNAs in myeloma pathogenesis.

Finally, we identified mir-105-5p as a prognostic factor for short OS by discovery-based survival analysis (Figure 2). We further validated the prognostic value of mir-105 in an independent validation-cohort. In our patient cohort the median OS time for patients with high miR-105-5p was 3.8 years, while for the patients with low miR-105-5p median OS was 9.07 years, thus miR-105-5p can be used to distinguish high-risk patients from low-risk patients. Furthermore, within the ISS III patient group, high miR-105-5p expressors had significantly worse outcome compared to low miR-105-5p expressors, suggesting that miR-105-5p may be used for further discrimination of patients in the high-risk subgroup. Patients with ISS III and high miR-105-5p had a median OS of 2.2 years while patients with ISS III and low miR-105-5p that had a median OS of 6.8 years, thus miR-105-5p may be a marker that can further stratify ultrahigh-risk9 patients from the other high-risk patients. The data are available in an interactive web application that can be used to explore the relation between sRNAs and clinical parameters, including patient survival: https://github.com/MjelleLab/MicroRNA-and-Gene-Expression-In-Multiple-M­­­yeloma.

In conclusion we provide a comprehensive overview of sRNA expression in malignant plasma cells of myeloma patients, identify spliceosomal snRNAs as differentially expressed in disease stages, and suggest miR-105-5p as a novel stratification marker that could be used for identification of high-risk patients. 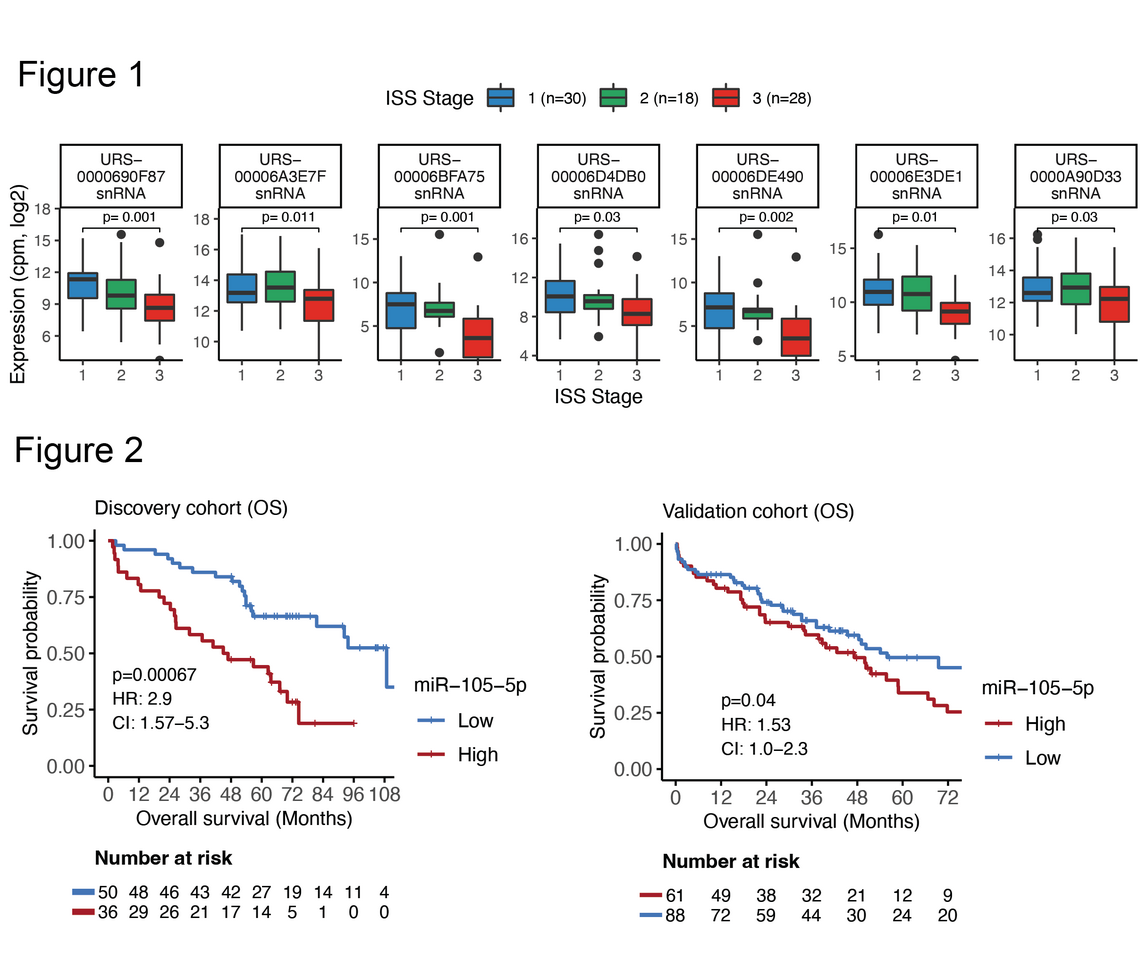