Searching for new regulators for cancers remains great interesting in the scientific community. Our group has identified a novel oncogene CREPT, also named RPRD1B, in human, mice and chicken [1]. This gene encodes CREPT protein, with a highly conserved sequence to p15RS. Both CREPT and p15RS belong to RPRD (Regulation of nuclear pre-mRNA-domain-containing) protein family including RPRD2 [2], Cids1 in nematode, Rtt103 in budding yeast and Rhn1 in fission yeast [3].

RPRD proteins contain C-terminal domain (CTD)-interacting domains (CID) that bind to the CTD of Rpb1, the largest subunit of RNA polymerase II (RNAPII) [2]. We and others revealed that this family proteins regulates transcription. Rtt103 was reported to regulate transcriptional termination in Torpedo model [4]. However, CREPT and p15RS also regulate transcription on the promoter regions of genes. We revealed that p15RS is an intrinsic inhibitor of gene transcription by disrupting the interactions between β-catenin and TCF4 and recruiting HDAC2 onto gene promoters to enhance histone 3 deacetylation [5, 6]. On the contrary, CREPT promotes gene transcription through interacting with specific transcription factors and enhancing histone modification for the accessibility of the RNAPII complex [7, 8]. Additionally, CREPT induces a transcription loop formed by the sequences of termination and promoter regions [1]. CREPT and p15RS also interact with different phosphorylated CTDs and are able to alter CTD modifications by cooperating with other factors such as a phosphatase RPAP2 [9, 10].

Intriguingly, we and other groups observed that CREPT promoted, but p15RS repressed, tumor cell proliferation [8, 11, 12, 13]. It was observed that p15RS was inversely correlated with the N/M classification and distance metastasis, and patients with lower p15RS expression showed a shorter survival rate [11, 12]. However, CREPT was showed to be abundantly expressed in tumors and its expression negatively correlates to patient survival [8, 14, 15]. The role of CREPT in tumors may not only attribute to its regulation on transcription but also in DNA damage repair. CREPT was also reported to participate in DNA damage repairing process including DNA mismatch repair (MMR)[16]and double-strand break (DSB)-repair [17, 18]. In this review, we summarized the current understanding of the roles of CREPT and p15RS in tumors and the underlying mechanisms. We expect that revealing the functions of RPRD proteins will not only deepen our knowledge on gene transcription and DNA damage repair regulations, but also shed lights on discovery of new target for diagnosis and therapy of cancers. 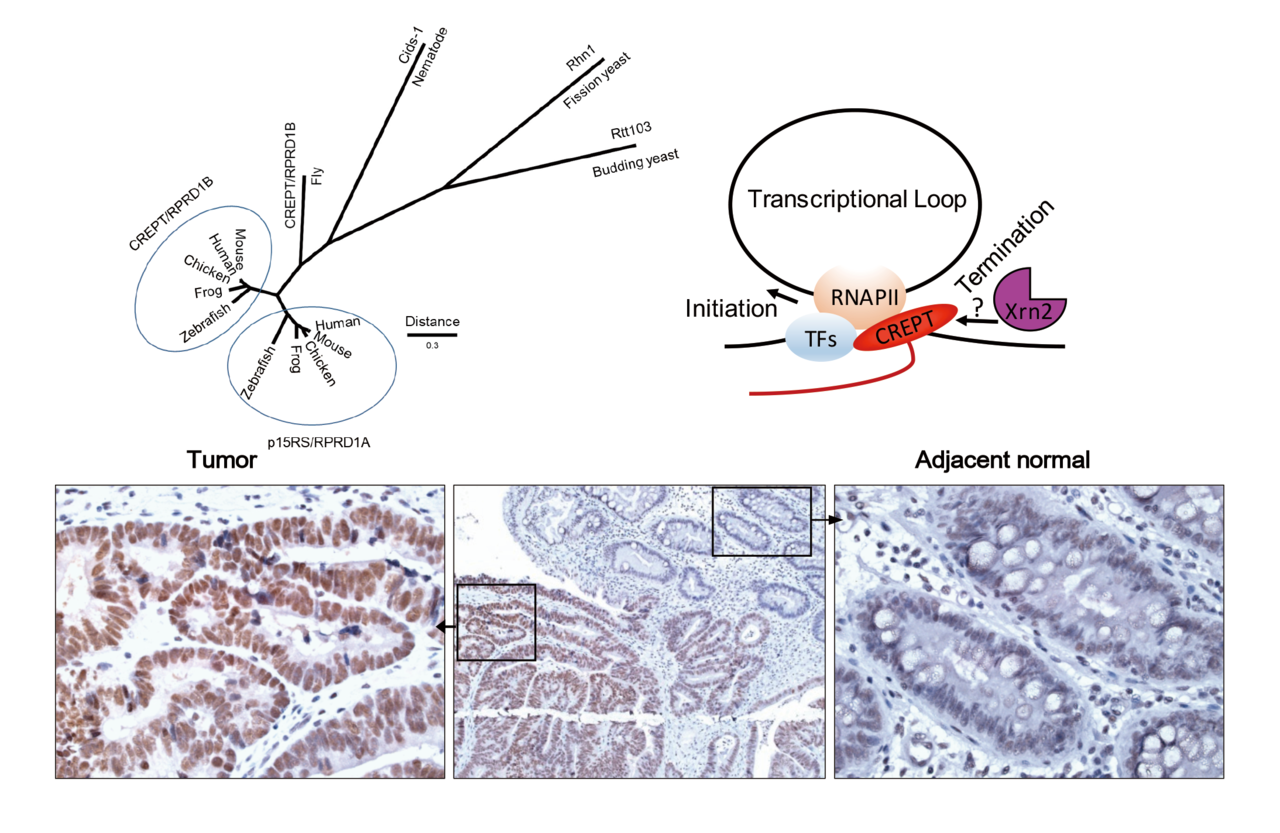