cSCC is a common cancer for non-Hispanic whites and its incidence is increasing not only in non-Hispanic whites but also in Latinos and Asians. Thus, there is a dire need to understand how cSCC may affect patients from diverse genetic ancestry backgrounds differently.

+2
Hélène Choquet and 2 others See all
Scientist, Kaiser Permanente Division of Research
Follow 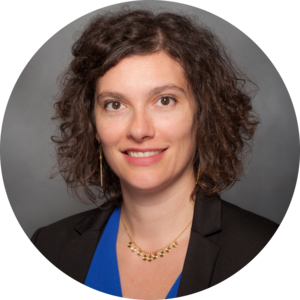 cSCC is one of the most common malignancies worldwide(1), and is derived from epidermal keratinocytes(2). Lighter skin pigmentation among European ancestry populations has been shown to be a strong determinant of cSCC risk because it provides less protection against damage from ultraviolet radiation (UVR) exposure compared to darker skin pigmentation(3, 4). While environmental risk factors, including UV radiation exposure, immunosuppression, tobacco use, and photosensitizing medications, contribute to SCC risk, genetic variation is also an important risk factor for cSCC(2). To date, three large genetic studies, conducted in European ancestry individuals, have pinpointed 16 regions, or loci, across the genome that are strongly associated with the risk of cSCC(5-7). However, the role of these variants or other variants in non-European ancestry individuals has not yet been characterized.

Dissecting the genetic structure of human populations can help identify individuals who are the most vulnerable to the risks of a given disease or disorder(8, 9). A genetic ancestry study utilizes principal components (PC) analysis (or other similar approaches) to characterize the genetic ancestry of an individual, and that ancestry can, in turn, be compared to the risk of a given disorder(10). Because of the observed variation in cSCC prevalence across race/ethnicity(1, 11), we examined whether cSCC prevalence was correlated with genetic ancestry within Hispanic/Latino and non-Hispanic white ethnic groups from the large Kaiser Permanente multiethnic Genetic Epidemiology Research in Adult Health and Aging (GERA) cohort.

The GERA cohort and its genetic structure

Our study on genetic ancestry and cSCC risk

Our study published in Communications Biology examined the contribution of genetic ancestry in cSCC risk in Hispanic/Latino and non-Hispanic white race/ethnicity groups from GERA. For each group, we examined the effect of the first 2 PCs, which represent geographic clines and are the only PCs that are geographically interpretable, on cSCC prevalence (Figure 1). We then ascertained whether genetic ancestry associations were explained by genetically predicted skin pigmentation, known cSCC genetic risk factors, and a clinical marker for chronic sun exposure. Finally, we conducted local ancestry analyses in GERA Hispanic/Latinos to determine whether each of the skin pigmentation- and/or known cSCC-associated loci show evidence of increased European ancestry in cSCC cases compared to controls.

We found that Northwestern European genetic ancestry is associated with increased risk of cSCC in non-Hispanic whites, and more so in Hispanic/Latinos of the US. The ancestry effects are largely, but not entirely explained by genetic determinants of skin pigmentation in both populations. Moreover, the ancestry effects were attenuated but not eliminated after adjusting for a clinical marker of chronic sun exposure. We also found evidence that the percentage of European ancestry at the SLC24A5 locus was strongly correlated with cSCC case status in Hispanic/Latinos (Figure 2). Interestingly, we also reported an association of the well-known pigment variant that leads to an amino acid substitution (Ala111Thr) at SLC24A5 with cSCC risk in Hispanic/Latinos. The Thr variant is fixed in Europeans while the Ala variant is fixed in Native Americans and East Asians, and hence the two variants are polymorphic in Hispanic/Latinos who have Native American and European admixture. This association of SLC24A5 skin-pigment associated variant with cSCC in Hispanic/Latinos is notable, as it has not been previously reported for cSCC, and likely explains the local ancestry effect. Further, SLC24A5 variant has a large effect on cSCC risk (OR=2.54 for Ala heterozygotes and 6.45 for Ala homozyogtes) and can explain a substantial proportion of the cSCC risk in Hispanic/Latinos.

The comparably light skin pigmentation in East Asians versus Northern Europeans but dramatically lower risk of cSCC in the former suggests that skin pigmentation alone may not be the primary determinant, but rather the specific genetic factors underlying that pigmentation. Future studies in East Asian and African American populations are solely needed to answer this question. 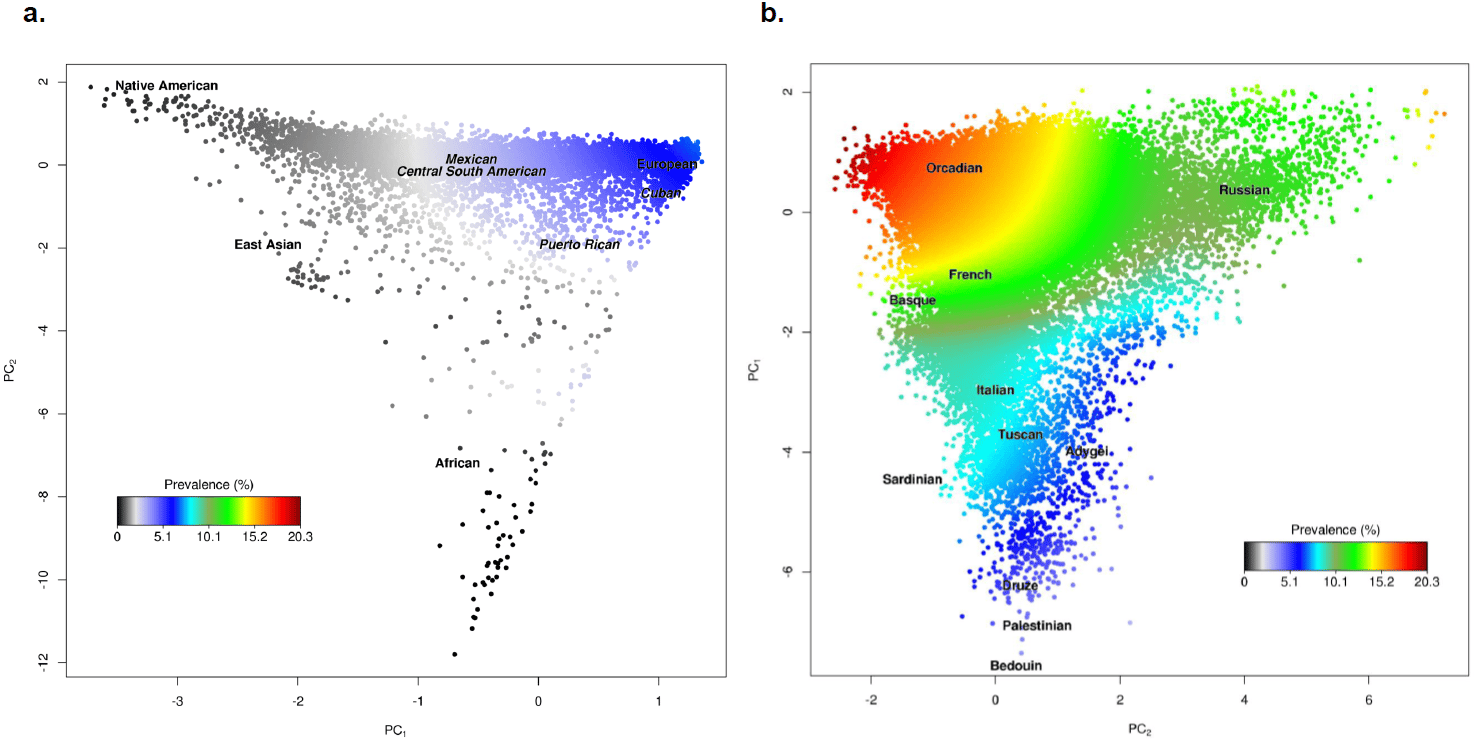 Figure 2. Association of local ancestry at SLC24A5 and cSCC risk in GERA Hispanic/Latinos. A local ancestry analyses was conducted in 8,490 GERA Hispanic/Latinos (294 cSCC cases and 8,196 controls). A significant association between cSCC risk and local European genetic ancestry was detected at SLC24A5, where on average cases were of 91.8% European descent compared with controls at 3.8%. 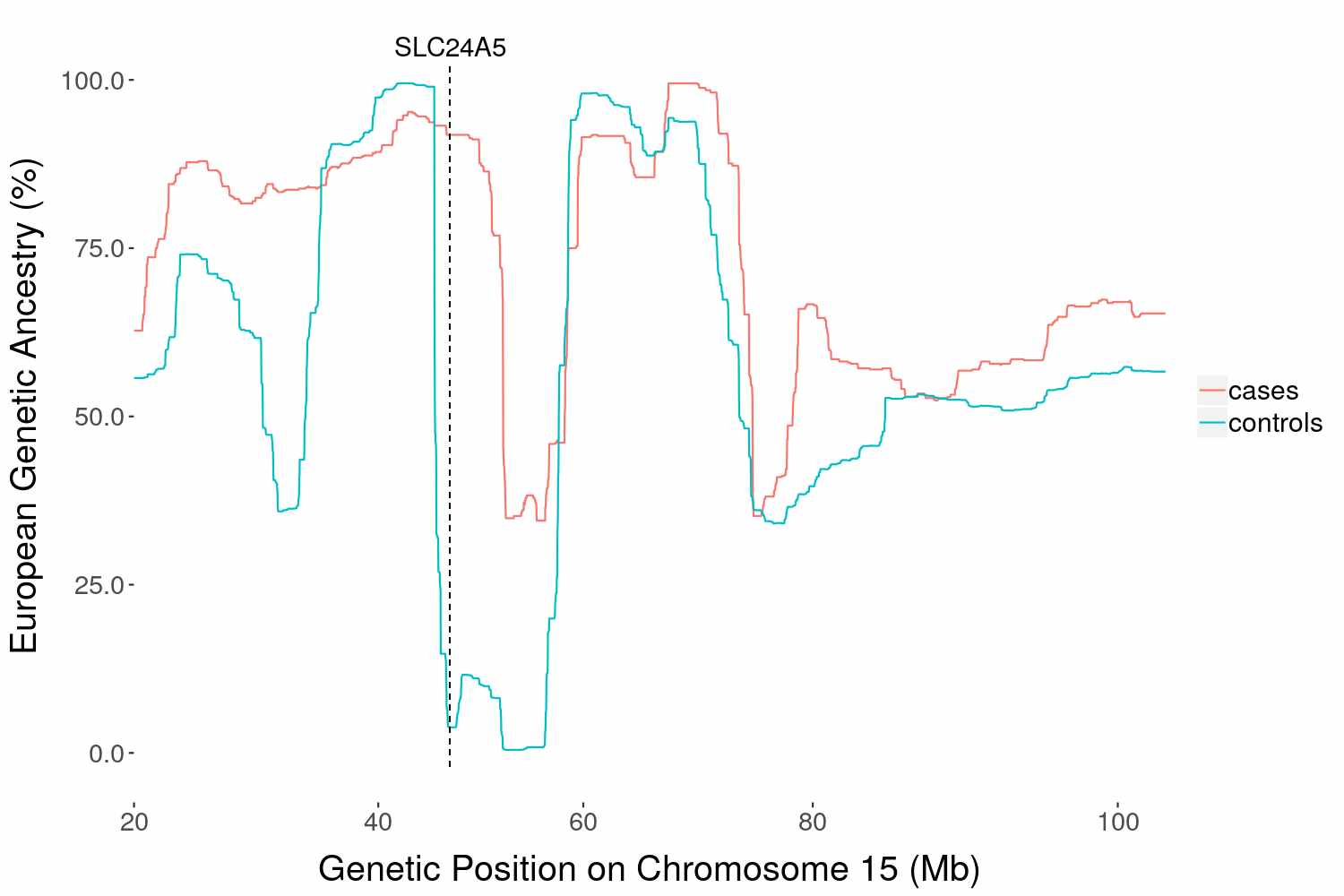