Genes encoding the metabolic enzymes UGT2B17 and UGT2B28 are often completely deleted from the human genome. Because these UGTs have been linked to prostate cancer risk and progression, we examined the impact of not having either UGT gene on the circulating metabolome of prostate cancer patients.
Michèle Rouleau
Research Professional, Pharmacogenomics Laboratory and Faculty of Pharmacy, Université Laval
Follow
Like Liked by Sorrel Bunting
0

Human UDP-glycosyltransferases UGT2B17 and UGT2B28 are metabolic enzymes expressed in several tissues where they are known to regulate the bioactivity of small endogenous molecules. However, the genes encoding these enzymes are deleted in 3% to 70% of the population, depending on the ethnic group. The existence of these natural human knockouts (KO) for UGT2B17 or UGT2B28 offers a unique opportunity to study the functions of these genes. Over the years, the expression level and variations in the number of copies of these genes have been associated with the risk and progression of several diseases including prostate cancer and leukemia. However, the mechanisms by which they do so are not well defined and may be linked to metabolic perturbations.

To examine this question, we studied treatment-naïve men diagnosed with localized prostate cancer from the large prospective PROCURE cohort. The circulating metabolome of UGT2B17 KO, UGT2B28 KO, and gene-proficient individuals well matched for clinical characteristics were profiled using four complementary targeted and untargeted mass spectrometry-based approaches. Profiles were compared to identify the metabolic consequences of these gene KO and affected metabolic pathways that could contribute to the progression of prostate cancer.

Of the 1545 metabolites measured, 5% were affected by the absence of UGT2B17 or UGT2B28. Interestingly, the same metabolic pathways were perturbed in each KO group but in a divergent manner, suggesting that each UGT displays unique functions despite sharing 84% sequence identity. Unexpectedly, a majority of changed metabolites were higher in UGT2B17 KO whereas a majority was reduced in UGT2B28 KO, relative to gene-proficient controls. These changes in the circulating metabolome of UGT2B17 KO and UGT2B28 KO reflect the overall impact of the complete absence of UGT2B17 and UGT2B28 enzymes in each tissue where they are normally expressed, including in the prostate tumors. Main affected pathways were those of sex steroid hormones, bile acids, ceramides, and tryptophan-kynurenine, which have been previously associated with prostate cancer risk or progression. Most notably, UGT2B17 KO individuals had reduced levels of steroid-glucuronide conjugates compensated by higher levels of sulfated derivatives. Production of sulfate over glucuronide conjugates might contribute to PCa progression, given that sulfated derivatives constitute a pool of circulating active steroid hormones, whereas glucuronide derivatives are considered end-products destined for elimination. UGT2B28 KO were characterized by largely reduced levels of inflammation mediators in circulation, including many oxylipins, whereas some sphingolipids were greatly elevated. This led us to demonstrate that some of these metabolites are novel substrates of these UGT enzymes.

Studying naturally occurring human gene KO individuals represents a unique and highly advantageous setting to examine gene functions. However, gathering enough UGT KO cases to reach adequate statistical power has been a challenge, especially for UGT2B28 KO. This could be achieved for the first time in our study, using the PROCURE prostate cancer cohort. We could delineate the broad metabolic rewiring associated with the complete germline deletions of UGT genes in the context of prostate cancer. Our findings provide the basis for a better understanding of the functions of UGT2B17 and UGT2B28 as metabolic enzymes, which deserve further characterization. Studies with larger population-based cohorts are ongoing and will help to examine the consequences of these gene deletions and validate our findings, including in healthy individuals. It may also delineate key metabolites affected in UGT KO individuals that contribute to a variety of diseases, and that may be studied further in disease-specific settings. Metabolic changes linked to UGT KO may also pinpoint possible vulnerabilities that could be exploited in the future to treat medical conditions previously associated with UGT KO, such as prostate cancer. 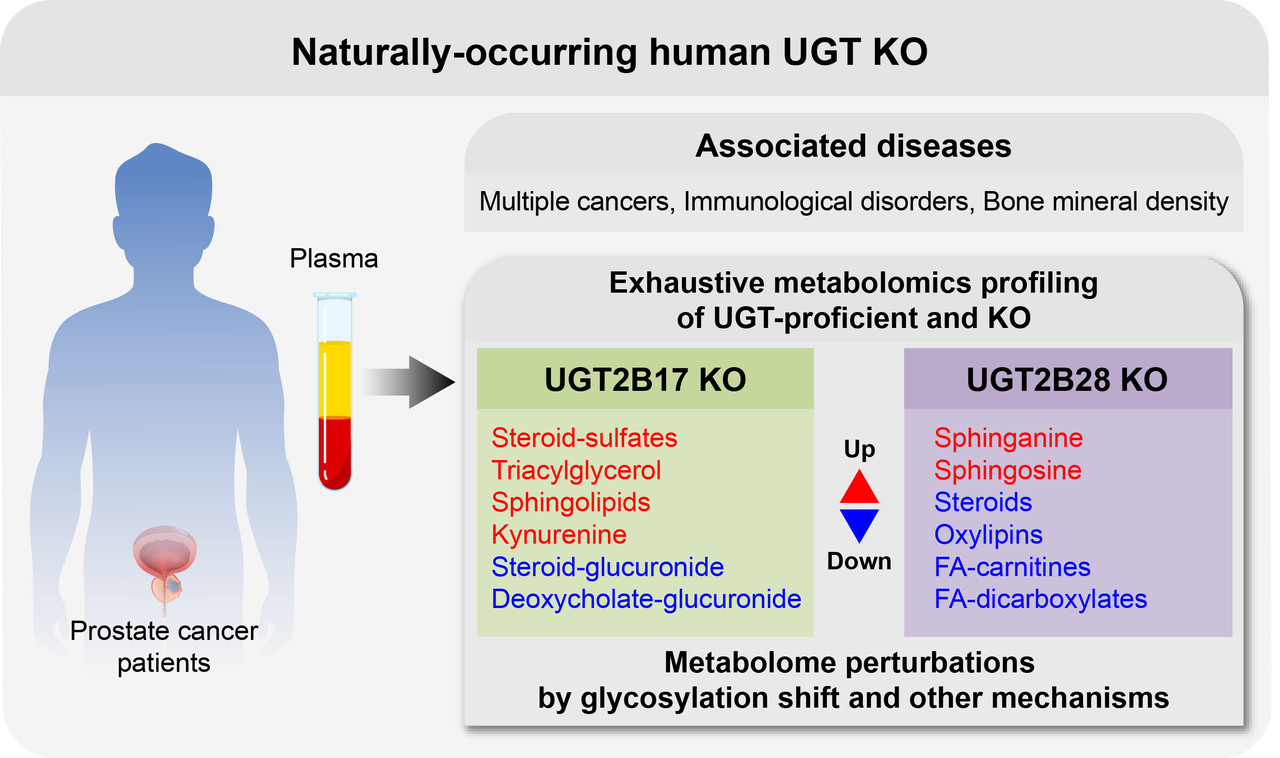 Genes encoding the metabolic enzymes UGT2B17 and UGT2B28 are often completely deleted from the human genome. Because these UGTs have been linked to prostate cancer risk and progression, we examined the impact of not having either UGT gene on the circulating metabolome of prostate cancer patients.