Only a minority of patients with non-small cell lung cancer (NSCLC) respond to immune checkpoint inhibitors. Here the authors design a nanosystem for the co-delivery of a PLK1 inhibitor and PD-L1 antibody, showing anti-tumor immune responses in preclinical lung cancer models.

Lung cancer is the leading cause of cancer-related deaths in the United States and across the globe.1 Because of this, non-small cell lung cancer (NSCLC), the most common class of lung cancer, has been the object of intense scrutiny for several decades. Immune checkpoint inhibitors (ICIs)—drugs that prevent lung cancer from evading the immune system—have recently gained FDA approval for their ability to improve survival in late-stage NSCLC patients. However, patients are not broadly responsive to ICIs, and those who do respond often relapse or become refractory to further ICI administration.2-4 Additionally, lung cancer patients are already subjected to intense therapeutic regimens in the course of treatment. With these factors in mind, we investigated a nanoparticle-based combination therapy that broadens the applicability and efficacy of ICIs while greatly reducing the effective dose and improving drug tolerability.

A majority of immune checkpoint inhibitors approved for NSCLC treatment target programmed death-1 (PD-1) and programmed death-1 ligand (PD-L1)—two proteins that comprise the “PD-1/PD-L1 axis” and are implicated in the immunosuppressive tumor microenvironment (TME) common to many cancer types.5-7  Thus, PD-L1 expression has emerged as a positive predictor of patient response to ICIs with high expression being associated with better treatment outcomes.8 Conversely, low levels of tumor infiltrating lymphocytes (TILs) are associated with lack of response or eventual resistance.8,9 It follows then that a therapeutic approach that upregulates PD-L1 in NSCLC tumors and increases the number of TILs could have profound clinical importance for ICI therapies.

Like PD-L1, mitotic kinases are overexpressed in a number of cancers including NSCLC.10 One mitotic kinase in particular, polo-like kinase-1 (PLK1), has been identified as a promising therapeutic target in prior works11 with several PLK1 small molecule inhibitors reaching clinical trials despite their dose-limiting toxicities and limited efficacy as monotherapies. In this work, we report that in the course of cancer killing by PLK1 inhibition, surface PD-L1 expression is significantly upregulated in surviving cancer cells through activation of the MAPK pathway.  In addition to PLK1, we also report that small molecule inhibitors of other mitotic kinases can recapitulate this effect. Following these discoveries, we investigated the synergistic potential of co-delivered volasertib (iPLK1) and PD-L1 antibody in vivo and found that the combination of these drugs surpasses the efficacy of either as a monotherapy (Figure 1).

In prior works, we have described the use of our polymer-coated mesoporous silica nanoparticle (NP) for the targeted delivery of siRNAs to breast and lung tumors.12,13 Here, in light of the significant toxicity risk associated with volasertib and PD-L1 antibodies, we used the platform to evaluate the efficacy of smaller, targeted doses of these drugs. In this formulation, the PD-L1 antibody on NP would serve a secondary purpose as a homing agent for nanoparticle delivery to cancer cells, in addition to blocking the PD-1/PD-L1 axis and allowing for antitumor immune activity. In vitro, we found that NP-loaded volasertib (iPLK1-NP) was significantly more effective than an equivalent dose of the free drug at killing LLC-JSP, 4T1, and B16-F10 cells (p <0.0001 in all cases), and that NP-loaded PD-L1 antibody (p-NP) could reduce surface staining of PD-L1 as effectively as a 30-fold higher dose of the free drug. In vivo, PD-L1 and volasertib co-loaded on NP (ARAC) prolonged survival of lung tumor-bearing mice well beyond that of the free drug combination at the same dose (p <0.01) and slightly beyond the free drug combination at a five-fold higher dose (Figure 2B).  Crucially, the ability to prolong survival was abolished by the administration of anti-CD8 antibodies—indicating ARAC’s reliance on CD8+ T cells (Figure 2C).

We investigated the anti-tumor immune response elicited by ARAC using a bilateral flank tumor model (LLC-JSP) in which treatments were injected intratumorally.  Treatments of ARAC slowed local tumor growth and prolonged survival significantly longer than p-NP or iPLK1-NP while also delaying the onset of tumors distal to the injection site, suggesting that an anti-tumor immune response was generated. In a related study using the same model, mice were treated with ARAC or saline at three timepoints before tumors and tumor-draining lymph nodes were harvested for immune profiling by flow cytometry. That data showed that ARAC-treated mice had significantly enhanced proliferation (Ki67+) of effector CD8+ T cells in the local tumor-draining lymph nodes, and a higher number of total immune cells, a higher number of CD8+ T cells, and a higher CD8+/Treg ratio in the tumor compared to saline treated mice (Figure 3).

In the formulation presented here, ARAC has the ability to kill cancer cells directly and upregulate their expression of PD-L1, improving the targeting of subsequent ARAC nanoparticles in a “feedforward” manner. Since the effect of ARAC is meditated by CD8+ T cells, we are investigating the addition of CpG, an immune-stimulant, to the ARAC construct (ARAC-02) to enhance activation and priming of CD8+ T cells by antigen-presenting cells (an approach that leverages the ability of our nanoparticle platform to load multiple cargo types without increasing hydrodynamic size beyond ~100 nm). With support from the National Cancer Institute, we are also optimizing a formulation of ARAC-02 that increases the loading of each drug by 2.5-4 times the doses reported here. By simultaneously catalyzing several steps of the adaptive immune response, ARAC-02 could ultimately produce curative outcomes in NSCLC.  Studies in other cancers that lack clear therapeutic targets, such as TNBCs, would then follow. 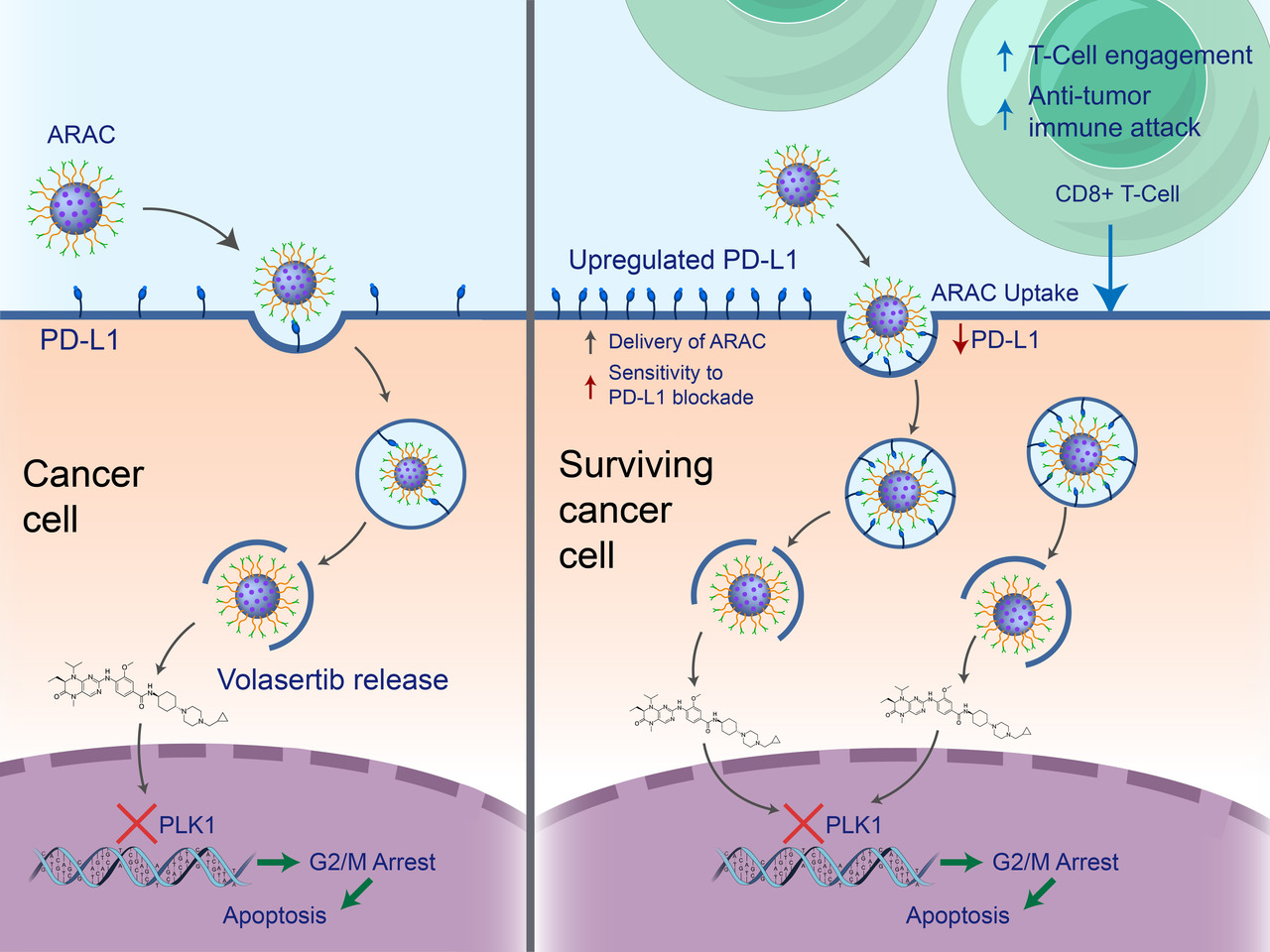