Classical myeloproliferative neoplasms (MPN) are clonal hematological malignancies due to an acquired mutation in the hematopoietic stem cells (HSC), leading to the constitutive activation of JAK2. The most prevalent mutation is JAK2V617F, which is associated with the three main MPN: essential thrombocythemia (ET), polycythemia vera and primary myelofibrosis (PMF). Mutations in the exon 9 of CALR (CALRm) have also been found in MPN, but only in ET and PMF, in around 20-30% of the cases. CALR is a chaperone protein of the ER. CALRm change the sequence of the C-terminus and CALR function. This new function allows the CALRm to bind and activate the thrombopoietin receptor MPL and JAK2-dependent downstream signaling. There are numerous CALRm, but the two most recurrent mutations are CALRdel52 type 1 and CALRins5 type 2 mutations. Their frequency is balanced in ET, but the type 1 is more prevalent in PMF, the most severe disease. Although close, evidence suggests that JAK2V617F and CALRm define two different types of MPNs

Here, we have extensively studied the biological and genetic features of type 1 and type 2 CALRm on hematopoiesis using primary patient cells.

We investigated at which level of hematopoiesis the dominance of the CALRm clone occurs. We showed that CALRm are present in all hematopoietic cells of the blood including myeloid and lymphoid cells. However, the type 1 CALRm spreads more easily than the type 2 CALRm in lymphoid cells. CALRm are present in a very high proportion of early hematopoietic cells including HSCs. Therefore, in most cases, we found no significant increase in the clonal amplification of the CALRm clone from the HSC compartment to the granulocytes with a nearly constant 50% variant allele frequency (VAF). Moreover, half of type 2 CALRm patients harbors some homozygous progenitors and these patients are associated with a higher clonal dominance during lympho/myeloid differentiation than patients with only heterozygous type 2 CALRm progenitors.

When associated mutations are present, we observed that CALRm (type 1 and 2) are the first genetic event in progenitors suggesting that they are both the initiating and phenotypic event.

These observations are totally different from what is observed in JAK2V617F MPNs, in which clonal dominance occurs during differentiation and with associated mutations usually preceding JAK2V617F. 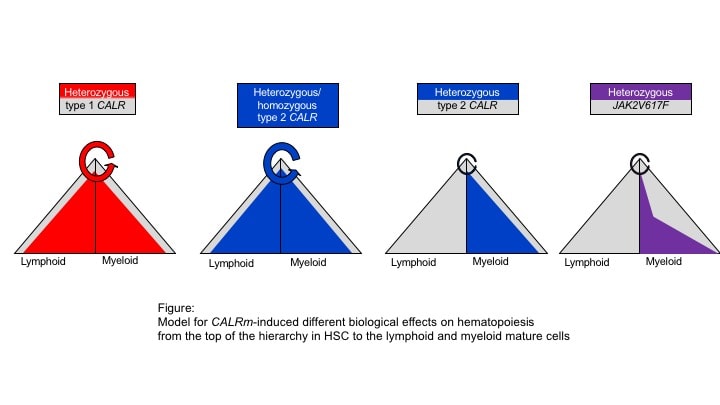 Both types of CALRm induced an increase in megakaryocytic progenitors associated with a cytokine independent growth related to mild constitutive signaling, as observed in megakaryocytes. Finally, at the transcriptional level, type 1 and type 2 CALRm deregulate similar pathways. However, more genes seem to be deregulated with type 1 than the type 2 CALRm in megakaryocytes particularly the genes involved in the TGF beta pathway.

Altogether, we have shown that CALRm give a clonal dominance in the early steps of hematopoiesis. We have also highlighted that CALRm modify both the HSPC and megakaryocyte biology with a stronger effect for type 1 than for type 2 CALRm. These data could explain why the type 1 CALRm are more represented in PMF than the type 2 CALRm. 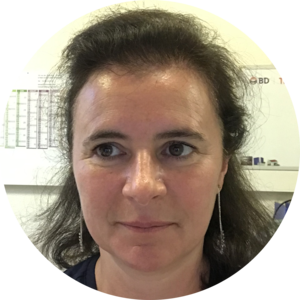