Lung cancer is leading cause of cancer related death worldwide. FGFR1 amplification is widely spread in SQCLC and SC lung cancers and thus offers a promising target. Clinical trials have shown promising results. Nonetheless, a sizable group of patients have shown resistance to FGFR1 inhibition.
Omar Elakad and Hanibal Bohnenberger
2 contributors
Like Liked by Kaisa Cui and 5 others
0

Purpose of the project

High prevalence of FGFR1 amplification in lung cancer made it an interesting and promising target, especially in those lung cancer types, which lack molecular targets. Consequently, various inhibitors have been synthesized to target FGFR1 gene amplification specifically (e.g., AZD4547 and BGJ398).1 Specific FGFR1 inhibitors have been tested in clinical trials phases I and II. Clinical trials have shown promising results where the inhibitors could achieve disease-control rate of 26–39%. Moreover, some patients have benefited from the treatment for more than 14 months, which is quite promising keeping in mind that those patients were at the last stage of lung cancer with bad prognosis and short predicted survival. Nonetheless, a sizable group of patients have shown resistance to FGFR1 inhibition.2,3

In our current research project, we aimed to characterize the different mechanisms of resistance to FGFR1 inhibition in squamous cell lung cancer. We intended to achieve our goal through performing a wide-scale phosphoproteomic screening using high-resolution mass spectrometry combined with RNA and DNA sequencing.

What is new in our approach?

To the best of our knowledge, the current study proposes the first wide-scale phosphoproteomic screening of three types of resistance against FGFR1 inhibition in lung cancer cells, i.e., (i) intrinsic, (ii) pharmacologically induced and (iii) mutationally induced resistance compared to sensitive cells. Additionally, results of the screening were correlated and validated through staining human tissue samples of 175 lung cancer patients.

What did we discover?

We were able to identify a new signaling axis that led to FGFR1 inhibition resistance in lung cancer cells. The resistance pathway consisted mainly of the three proteins CD44, PAK1 and AKT.  Combination inhibition of AKT and FGFR1, CD44 and FGFR1 or PAK1 and FGFR1 could reverse the resistance and re-sensitize intrinsically resistant and induced-resistant lung-cancer cells synergistically to FGFR1 inhibition. Additionally, squamous cell lung cancer patient tissue samples could validate the correlation between strong CD44 expression and AKT activation in SQCLC patients. Finally, our phosphoproteomic screening datasets alongside RNA and DNA sequencing could provide a valuable library for studying resistance-associated phosphorylation patterns in lung cancer cells.

Translational relevance of our discovery

On the one hand, the current project provides a wide-scale phosphoproteomic library of protein regulations that stand behind intrinsic and induced resistance against tyrosine kinase inhibition in cancer targeted therapy. The library introduces protein phosphorylation patterns in sensitive and resistant cell lines under control and treatment conditions, which could be used as a reference for FGFR1 inhibition specifically and tyrosine kinase inhibitors in lung cancer generally.  On the other side, the project reveals a mutual resistance pathway between different types of resistance developed against FGFR1 tyrosine kinase inhibitors. The resistance pathway is composed mainly of CD44 overexpression / activation that led to PAK1 expression / activation and AKT activation. Examining levels of CD44 and/or AKT activation might predict the response of lung cancer patients to FGFR1 targeted treatment. Moreover, combinational therapy between CD44/PAK1/AKT and FGFR1 can significantly and synergistically reverse this behavior and sensitize resistant cells to the tyrosine kinase inhibition. 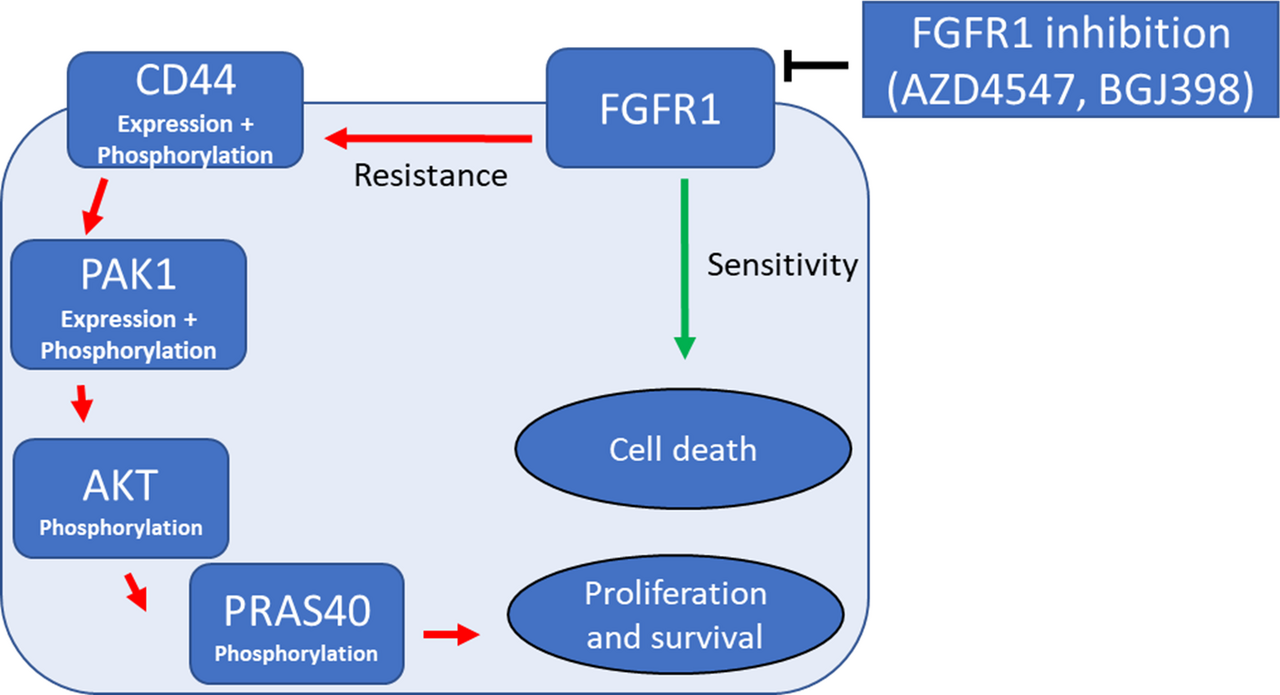