This post details some of the motivation and concepts of our paper, and why we decided to focus on a different type of observable phenotype within CRISPR genetic screens.

We live in the prosperous ‘omics’ era, where sequencing and big data techniques have revolutionized science and what it means to conduct genetic quantitative analysis. With so much new data available, many scientists have been racing to secure data and identify methods that can answer various questions at hand. In the Hart lab, we work with whole genome genetic fitness screens, which have become a prevalent tool in evaluating cancer genetic dependencies. The promise of fitness screens with CRISPR is simple; these screens provide an unbiased approach, with considerably more precision compared to previous technologies, that can identify context specific genes that cause disruptions to growth fitness in cancer cells representing potential therapeutic targets. In this scenario, context can mean anything from cancer type, presence of a gene mutation, or any other biological feature of the cell. Over one thousand CRISPR screens have been made publicly available, and as a whole, we have been able to learn many interesting facets of genetic functional roles. Specifically, one of the key interesting observations from these panels of screens when analyzed together is the concept of “co-essentiality,” where we can establish groups of genes with common fitness patterns that are functionally coherent. This observation extends from the yeast genetic interaction studies and has provided both new functional annotations for genes that are not well defined, as well as identify cancer functional dependencies that can be leveraged as therapeutic targets.

Many of the papers published that are collections of genetic screens have prioritized genes that cause cellular fitness deficiency when their function is knocked out by CRIPSR. Generally, we observe ~3,000 genes of 18,000+ tested genes will cause a fitness defect in any given single screen. That is less than 20% of tested data, suggesting that 80% of total data goes largely ignored. This sparked a question in our lab of what we can learn from this so called ‘ignored’ data.  This was one of the primary motivations when we sought to develop a methodology that reviewed for genes that did not fall into the category of causing fitness defects. During a genome-wide screen, a single gene knock out can cause three observable phenotypes; 1. cell loses fitness (where most research efforts are spent), 2. negligible impacts on fitness, or 3. the cell’s fitness is “improved” (cell growth rate increases). The 80% of less explored data generally are made up of phenotype 2 or 3.

Our initial investigations suggest that genes that suppress cancer growth in genetic fitness screens, and thereby are observed as “improving” cellular fitness following knockout (phenotype 3 above), are made up with well-defined COSMIC tumor suppressors (Figure 1a-b). This observation is expected, however can be pushed further, and used to develop a model that can capture tumor suppressor’s behavior. Tumor suppressors have unique signatures in genetic fitness screens as depending on the cancer cell context, knocking out a tumor suppressor can cause any of three previously mentioned outcomes to a cell. If the tumor suppressor has a loss of function mutation, then it will most likely have no effect on cellular growth fitness. Similarly, a gain of function of mutation to a tumor suppressor can cause it to behave more like an oncogene, and in some cases force cancer cells to depend on it, thus reducing fitness of a cancer cell if knocked out. However, if a tumor suppressor is still in wild-type condition, we can observe it working to suppress cancer growth and when knocked out improving cancer fitness growth.

We refer to genes that demonstrate this behavior, where a cell’s fitness is improved following gene knockout, as proliferation suppressor genes (PSG). Within our paper, our main computational approach implemented to identify PSG was a Gaussian mixture (k = 2) modeling of all gene’s mean Log fold-change values coming from each independent screen, resulting in gene-level Z scores, where positive Z-scores indicate PSG observations. The behavior of COSMIC TSGs within these screen sets, helped inform us of an appropriate cutoff to identify the PSG observation.

Using the concepts we learned from developing ‘co-essentiality networks,’ we were able to develop a PSG co-occurrence network, where we identified genes that co-occurred as PSG in the same backgrounds. Analogous to co-essentiality networks, we were able to identify functionally coherent groups of genes that operated in similar backgrounds together (Figure 2).

Our co-occurrence network provided many initial positive controls, including gene groups such as members from the JAK-STAT signaling co-occuring together, TP53 pathway members, STAGA chromatin remodeling complex, and hippo pathway members to name a few examples. However, like previous co-essentiality networks, we sought to identify from this network new functional annotations, specifically functional annotations of gene pathways that we do not normally consider to act as PSGs. 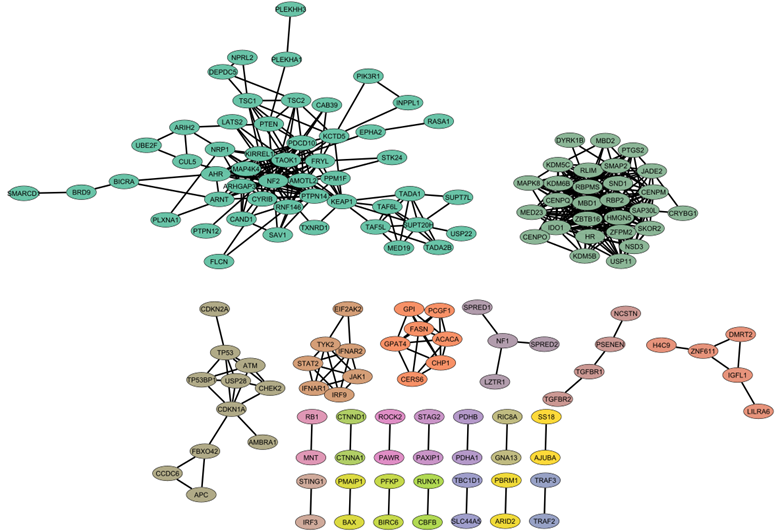 One of the gene modules to come from this analysis was a group of fatty acid synthesis genes that were observed within acute myeloid leukemia (AML) cells. This observation was unexpected given the critical role of this pathway as it relates to cancer progression. For much of the second half of the paper, we evaluate this specific gene group, and further demonstrate this proliferation suppressor phenotype genetically and biochemically, while demonstrating that there is potential that this phenotype exists within clinical data.

The key message of the paper is as follows: we aimed to identify proliferation suppressor genes within the large set of publicly available CRISPR genetic screens; we observed a group of genes involved in fatty acid synthesis which was unexpected; we genetically and biochemically validated this gene group’s growth suppression behavior, as well as internal pathway interactions; we observe that these genes carry a strong signature in tumor genomics data, potentially indicating a clinically relevant subtype of AML.

We hope that our paper conveys two central ideas related to conducting analysis with genetic screening data from databases such as DepMap or Project Score. First, is that there is still much that we can learn from investigating large-scale screening data. There are still clinically relevant questions of interest that we can ask of CRISPR screens that extend beyond identifying genetic vulnerabilities. Second and finally, this analysis demonstrates the power of CRISPR screens and the ability of being able to conduct clinically relevant bioinformatic investigations. 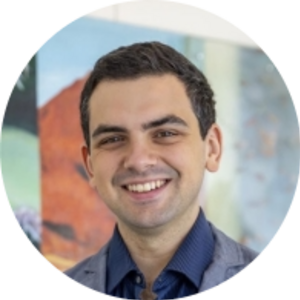