The spatiotemporal heterogeneity of CTCs is one of the topics that has been vigorously investigated in our laboratory for last few years. Our exploring journey has started from systemically mapping the CTC distribution and characterized their epithelial-to-mesenchymal transition (EMT) features across multiple vascular compartments in localized HCC patients. The cellular number and size gradient between tumor efferent vessels and post-pulmonary vessels was remarkable. Tracking the fate of CTC clusters revealed that CTCs displayed an aggregated-singular-aggregated manner of spreading. Characterization of EMT features demonstrated that CTCs were predominantly epithelial at release, but dynamically activated the EMT-program during hematogeneous transit. Moreover, CTC burden in hepatic veins and peripheral circulation prognosticated postoperative lung metastasis and intrahepatic recurrence, respectively. This pilot study published in Clinical Cancer Research4 has demonstrated a profound spatiotemporal heterogeneity in cellular distribution, EMT features, and clinical significance existed among CTCs, which has encouraged us to further hypothesize that CTCs might spatially and temporally modulate their phenotypic characteristics and molecular signaling by altering transcriptional program during dissemination to survive the inhospitable circulatory microenvironment and colonize distant sites. 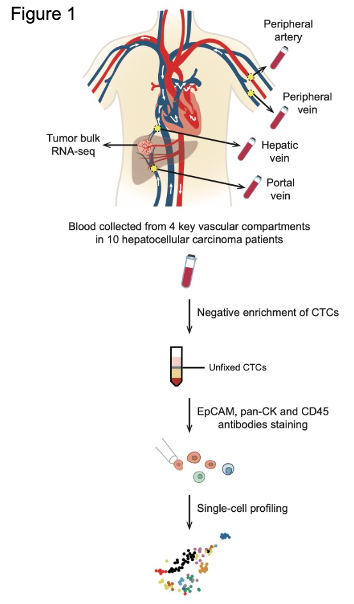 Our data demonstrated that the inter-CTC heterogeneity varied significantly among different vascular compartments. A remarkably heterogeneous CTC population was identified in liver efferent vessels (HV), supporting the hypothesis that CTCs were shed randomly from several spatially distinct regions of primary tumors. In the PA, the intercellular heterogeneity of CTCs decreased significantly, implicating a selection process where smaller and more deformable cells preferentially pass the pulmonary capillary filter. Notably, the intercellular heterogeneity of CTCs increased again in PV and PoV. Given the complexity of the bloodstream microenvironment, CTCs are exposed to various biophysical stresses during peripheral circulation, including flow-based shear stresses, loss of anchorage, interaction of cytokines and immune cells5,6. To restore cellular homeostasis, CTCs might activate adaptive stress response pathways that not only increase stress tolerance but may also contribute significantly to their phenotypic diversity. Accordingly, our data showed that the biological processes involved in cell cycling, immune response, regulation of cytokine production and response to stimuli were specifically enriched in PV CTCs. Thus, CTCs in tumor efferent vessels may represent intratumoral heterogeneity, whereas the transcriptional diversity observed in peripheral CTCs informs their adaptation-related evolution.

Once CTCs leave the protective immunosuppressive tumor microenvironment, they are outnumbered by peripheral immune effector cells. The successful evasion of immune-mediated killing is critical for CTC survival and dissemination. Consistent with recent reports6, our scRNA-seq data showed that CTCs from HCC patients exploit a variety of immune-evasion strategies, including EMT, platelet-CTC aggregates and the production of immunosuppressive chemokines. Excitingly, a novel immune evasion mechanism of CTCs was discovered in this study. We identified CCL5 as top upregulated genes among 15 immune escape-related genes in CTCs, which has previously been implicated in regulatory T cells (Tregs) recruitment in other types of cancer. We first confirmed a positive correlation between CCL5+ CTCs and peripheral Tregs in two independent cohort of HCC patients, and patients with a high percentage of Tregs and elevated CCL5+ CTCs count in peripheral blood had a higher risk for recurrence and a worse overall survival. Both in vitro and in vivo models rigorously validated that CTC-derived CCL5 recruited the Tregs to facilitate the creation of an immuno-suppressive and pro-metastatic microenvironment in HCC. Further mechanistic study uncovered that the overexpression of CCL5 was transcriptionally regulated by p38-MAX signaling. Knockdown of MAX significantly inhibited tumor growth and distant metastasis of HCC cells. Tregs recruitment in metastatic lesions were also abrogated by MAX silencing. Finally, we discovered that the peripheral Tregs-derived TGF-β1 in turn activated p38-MAX signaling to induce CCL5 expression in CTCs. This reciprocal activation of CTC and Tregs promoted CTC evasion of immune surveillance, thereby enhancing their survival in bloodstream and facilitating distant metastasis (Figure 2). 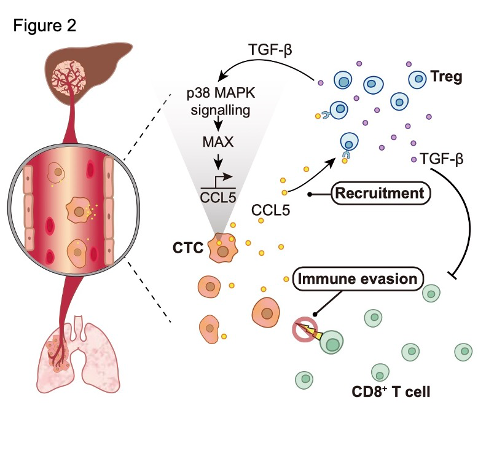 In summary, our scRNA-seq CTC data revealed remarkable intra- and inter-vascular heterogeneity among CTCs from four vascular sites. By comparing CTCs from neighboring vascular sites, we found their transcriptional dynamics associated with stress response, cell cycle and immune evasion signaling during transportation through consecutive vascular compartments. Our study proposes the use of scRNA-seq to study the mechanism of metastasis by dissecting CTC transcriptomic profiles, which may aid in designing new anti-metastasis therapeutic strategies in HCC.