Cancer is one of the major diseases that endangers human health. Recently, the high incidence and mortality of lung cancer and breast cancer have become the leading cause of death and an important public health problem. Genomic DNA is continuously exposed to exogenous damages and endogenous genotoxic agents. If left unrepaired, DNA damages can result in genome instability and lead to cell cycle arrest, cell death and tumorigenesis. It has become apparent that abnormal of DNA repair system contributes significantly to the onset of cancer.

Base excision repair (BER) pathway is one of the main guardian pathways against DNA damages, which is responsible for base damages and single strand break damages. DNA polymerase β (Pol β) is an important polymerase in BER and a key protein for maintaining genomic stability. It functions with two domains: the N-terminal domain, which is essential for the dRP lyase activity, and the C-terminal domain, which performs the nucleotidyl transferase activity during BER. Mouse models developed to evaluate the functions of Pol β, show higher peri-embryonic lethality in homozygous Pol β null (Pol β−/−) ones, and increased chromosomal instability as well as higher tumor incidence in heterozygous (Pol β+/−) ones.

Our studies focus on the function of Pol β on cancer progression. The clinical outcomes from TCGA in breast cancer patients and lung cancer patients showed that low Pol β mRNA was related to high grade of tumor and poor survival. In addition, lower Pol β expression was associated with metastasizing lymph nodes. Our experiments demonstrated that overexpression of Pol β lower the motility and invasiveness of tumor cells both in vitro and in vivo. Notably, microarray and GO analysis indicated the regulation of CDH13 expression by Pol β. CDH13 is one of the members of the cadherin family, which is related to the development of various tumors. We demonstrated that the functions of Pol β in suppression of tumor metastasis are achieved through the Pol β-mediated transcriptional upregulation of CDH13. Moreover, Pol β upregulated CDH13 expression via demethylating its promoter. Collectively, our results not only uncover a novel mechanism by which Pol β suppress tumor metastasis but also rise the potential of Pol β as a transcriptional effector to regulate other genes implicated in the progression of cancer. 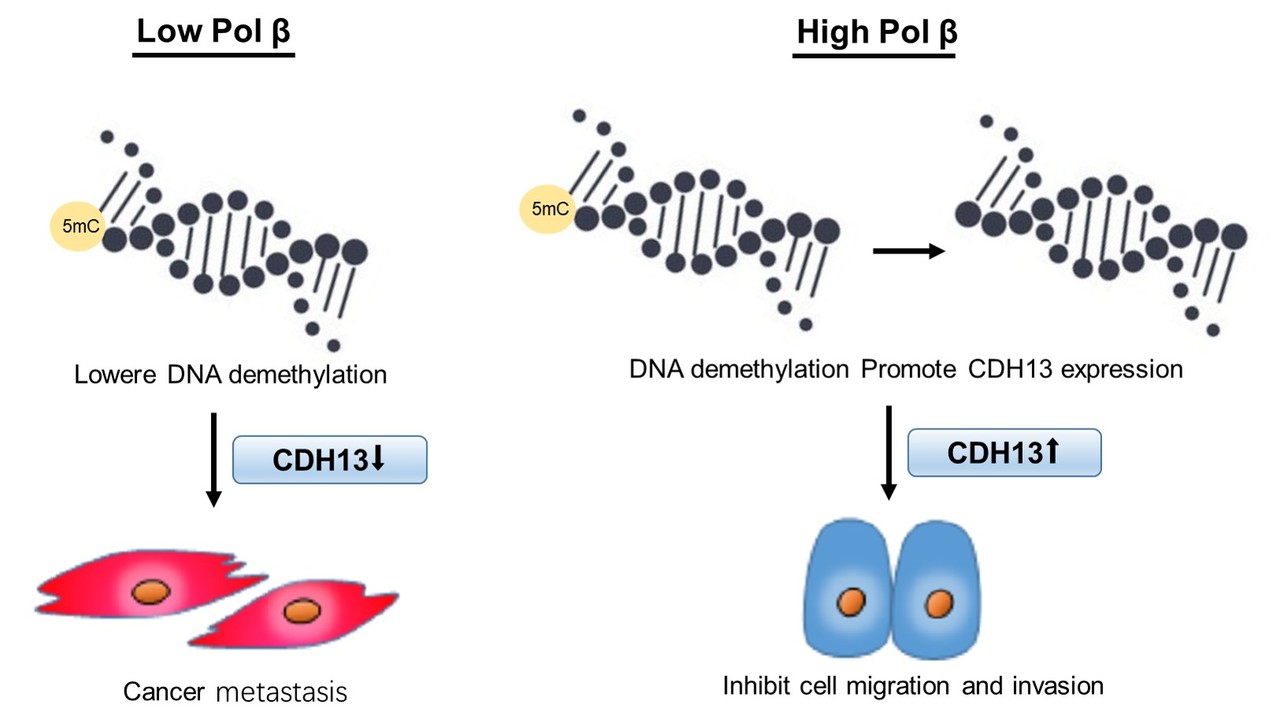