We rationally designed a self-assembling platform which mimics the rich matrix of pancreatic cancer. We found that cancer stem cells from patients thrive in this environment and recapitulate drug response.

Pancreatic cancer has the lowest survival among all cancers and its incidence and mortality continue to rise. It will soon be the second most common cause of cancer-related death in the West. Unfortunately, it remains chronically underfunded despite the fact that risk of preinvasive disease in older individuals is very high and its few risk factors make it virtually unpreventable. Such an unmet need was the motivation behind this project, which was developed as part of my BBSRC-funded PhD at the Barts Cancer Institute in London.

When I joined Chris Heeschen’s lab in 2016, one of his postdocs was in the process of refining a novel method of isolating circulating tumour cells from patients’ blood with high efficiency. Some of these cells showed the characteristics of cancer stem cells, which Chris had independently discovered in pancreatic cancer in 2007. However, studying these cells turned out to be difficult, since they would differentiate in culture. Keeping them in suspension was also not a viable option since cell numbers were very low, so the most obvious answer seemed Matrigel. However, we soon realized that Matrigel and the colonies that are usually formed in this matrix, organoids, are far from ideal.

The problem with organoids

Organoids are the brainchild of molecular biologist Hans Clevers, who recognized that, since individual intestinal crypts are clonal, they could be reconstructed from single cells given the necessary growth factors. His protocols soon swept the world and organoids were being prepared of every known tissue. The problem was that not every adult tissue arises clonally from an anatomically defined stem cell niche. In fact, this is most likely an exception to the rule. Protocols for pancreatic cancer were largely copy-pasted from those used to model colorectal cancer. However, using Lgr5 agonists, gastrin and other molecules seemed irrelevant for the pancreatic ductal niche (if there is one) and such a cocktail of cytokines was essentially directing differentiation down a very specific path. We were looking for a method of promoting stem cell self-renewal rather than differentiation, so organoids were clearly not it.

To do so, I was lucky to have access to patient samples and their corresponding xenografts in mice via the EU-funded CAM-PAC consortium. With these samples, I was able to compare side by side multiple patient-matched ex vivo and in vivo models by functional, molecular and multi-omic approaches.

But, first, I needed a platform.

Organoids are made in Matrigel, an extract of basement membrane proteins from mouse sarcoma — it is extremely soft (10 to 200 times softer than pancreatic tumours), has a variable composition (50% is laminin-111, which is absent in humans), lacks most interstitial matrix components, and it is essentially not tuneable. Since pancreatic tumours are densely fibrotic, i.e. collagen-rich, it made sense to start the project by building collagen gels.

However, these gels required cross-linking to control their stiffness and didn’t offer much more tuneability beyond that. Moreover, I came to the realization that sparse cultures of single cells are, by design, poor models of the balls of cells we find in tumours, were every cell is physically fighting for survival with its neighbours. So, how could we make such balls of cells in collagen? The answer turned out to be self-assembly.

Chris had just begun a collaboration with Álvaro Mata from the Institute of Bioengineering, also in Queen Mary. Álvaro’s expertise is the supramolecular assembly of biomaterials, which enables biologists to design, construct and control custom materials for cell culture, regenerative medicine, etc. Among the most versatile materials he worked with were peptide amphiphiles (PAs), which were developed by his former advisor Samuel Stupp at Northwestern University.

With the invaluable help of postdocs Estelle Collin and Sara Trabulo, we demonstrated that PAs can co-assemble with collagen and other matrix proteins. The extracellular matrix contains up to a thousand proteins, so our strategy was to identify the key components for assembly and let the cells do the rest. Since the matrix is mainly deposited by stromal cells, we included primary pancreatic stellate cells and macrophages. In the end, proteomic analysis showed that self-assembled cultures resembled their tumours of origin much more faithfully than organoids. Clearly, our liberal design strategy had worked. 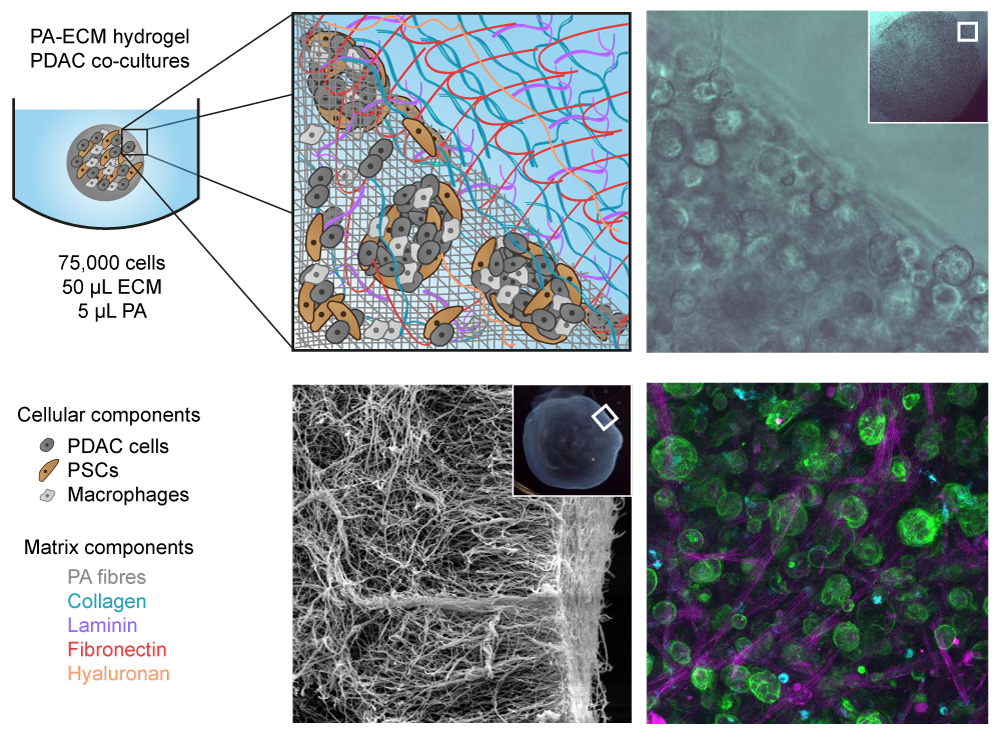 At this point we had a model that looked like patient tumours, but we did not know whether the cells in them were behaving similarly. Were there any stem cells and were they doing what stem cells do?

After a week in culture, self-assembled gels contained around 10% of cells with an aggressive “stem-like” state characterized by CD133 and CXCR4 markers, about the same as tumours. In comparison, spheres had 5%, organoids 2% and monolayers 1%.

Strikingly, when we implanted them into mice, self-assembled cultures gave rise to more tumours, which grew faster, were four times bigger and looked much more disorganized, a sign of undifferentiated stem-like cells. 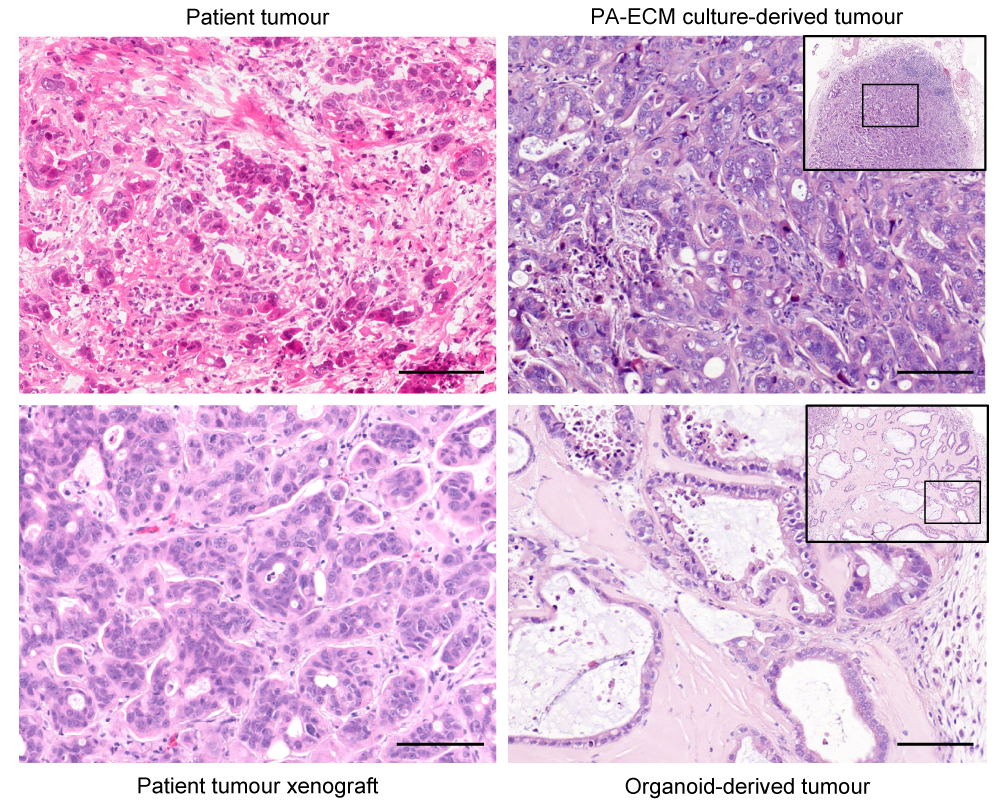 When we treated them with drugs, the self-assembled cultures recapitulated the in vivo pattern of resistance, while organoids, spheres, etc. did not. As expected, resistance correlated with stem cell content.

Finally, the project had come full circle, from its conception within the pipeline of early detection to its promise as a preclinical platform for drug testing, which in turn could be used with circulating tumour cells.

The possible improvements to this platform are too many to list here. Perhaps the most common suggestions are blood vessels and lymphocytes, often essential in cancer; but since pancreatic tumours are hypovascular and “cold”, we have preferred to focus on fibroblasts and macrophages — the most abundant cell types in the stroma.

Another limitation is that we only used samples from resections. Ultimately, we aim to validate the model with circulating tumour cells from liquid biopsies and with a wider cohort of patients, but the definitive comparison would be between our model and patients undergoing therapy concurrently (co-clinical trials). We hope such an approach will be feasible in the not-too-distant future. 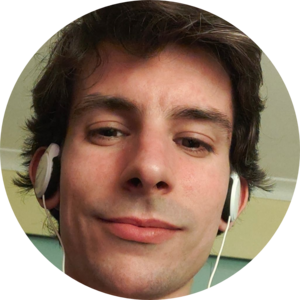