Homologous recombination deficiency (HRD) has been described in leiomyosarcomas (LMS). These findings suggest that HRD, as measured by genomic loss of heterozygosity, is prevalent in LMS but has unique genomic drivers compared to other cancers.
Nathan Seligson and Monica Bennett
2 contributors
Like Liked by Evelina Satkevic
0

Leiomyosarcoma (LMS) is a rare and aggressive form of sarcoma which originates from smooth muscle cells. Clinical management of advanced LMS is challenging as few medical therapies demonstrate the ability to kill LMS cells. There are currently no approved biomarkers that can be used to guide the selection of clinical treatment in LMS. Therefore, there is an urgent need to identify biomarkers to guide the treatment of patients with LMS. Emerging predictive biomarkers in LMS include deficiencies in the homologous recombination (HR) DNA repair pathway. Deficiencies in the HR pathway have been associated with response to poly(ADP-ribose) polymerase (PARP) inhibitors in breast, ovarian, and prostate cancers, among others. HR pathway deficiencies can be identified by DNA sequencing through either mutations in HR pathway related genes, or using genomic phenotypes such as genomic loss of heterozygosity (gLOH) and homologous recombination deficiency (HRD). In LMS, the clinical meaning of HRD in LMS and its association with gLOH are poorly understood.

In this recently published study, we evaluated the clinical and genomic characteristics, including gLOH, in 1,658 LMS tumors. Comprehensive genomic profiling data from LMS tumors were assayed in the course of clinical care. From this database, microsatellite status, tumor mutation burden, gLOH, and pathogenicity of genomic alterations were determined. In this cohort, the mean gLOH was 12.9%. Based on this analysis, the distribution of gLOH in LMS was similar to ovarian carcinoma, with ~30% of tumors identified to be gLOH-High using a cutoff of 16%. Uterine LMS had an elevated gLOH compared to non-uLMS, supporting previous data suggesting that uLMS is both clinically and molecularly distinct from non-uLMS. No other clinical factors were associated with gLOH. Gene alterations in the HR pathway were prevalent in this cohort, present in 12.5% of LMS tumors. Concordant with prior reports is that genomic variants in the HR pathway genes in LMS are primarily variants in BRCA2. Homozygous deletion of BRCA2 or RAD51B were the only highly recurrent HR gene alterations identified. Furthermore, only homozygous deletion of BRCA2 was associated with an increase in gLOH. A LMS-specific gLOH signature was identified to include homozygous deletion of BRCA2, CDKN2A, CDKN2B, DAXX, NF1, and RB1, as well as amplification of FBXW7, and MYC. It is notable that of the genes associated with gLOH and PARP response in ovarian carcinoma, only BRCA2 was associated with gLOH in this LMS cohort. Gene alterations correlated to gLOH in LMS were notably different from those identified in ovarian carcinoma.

There remains a significant gap in the molecular understanding of LMS. The development of precision therapy for this rare and aggressive disease requires further dissection of molecular subtypes present. Data from our large-scale genomic analysis of LMS suggest that gLOH in LMS differs from other epithelial-derived carcinomas. Correlative data from prospective trials of PARP inhibition in LMS may provide further evidence of HRD as a predictive biomarker in this disease (NCT03880019 and NCT05174455). 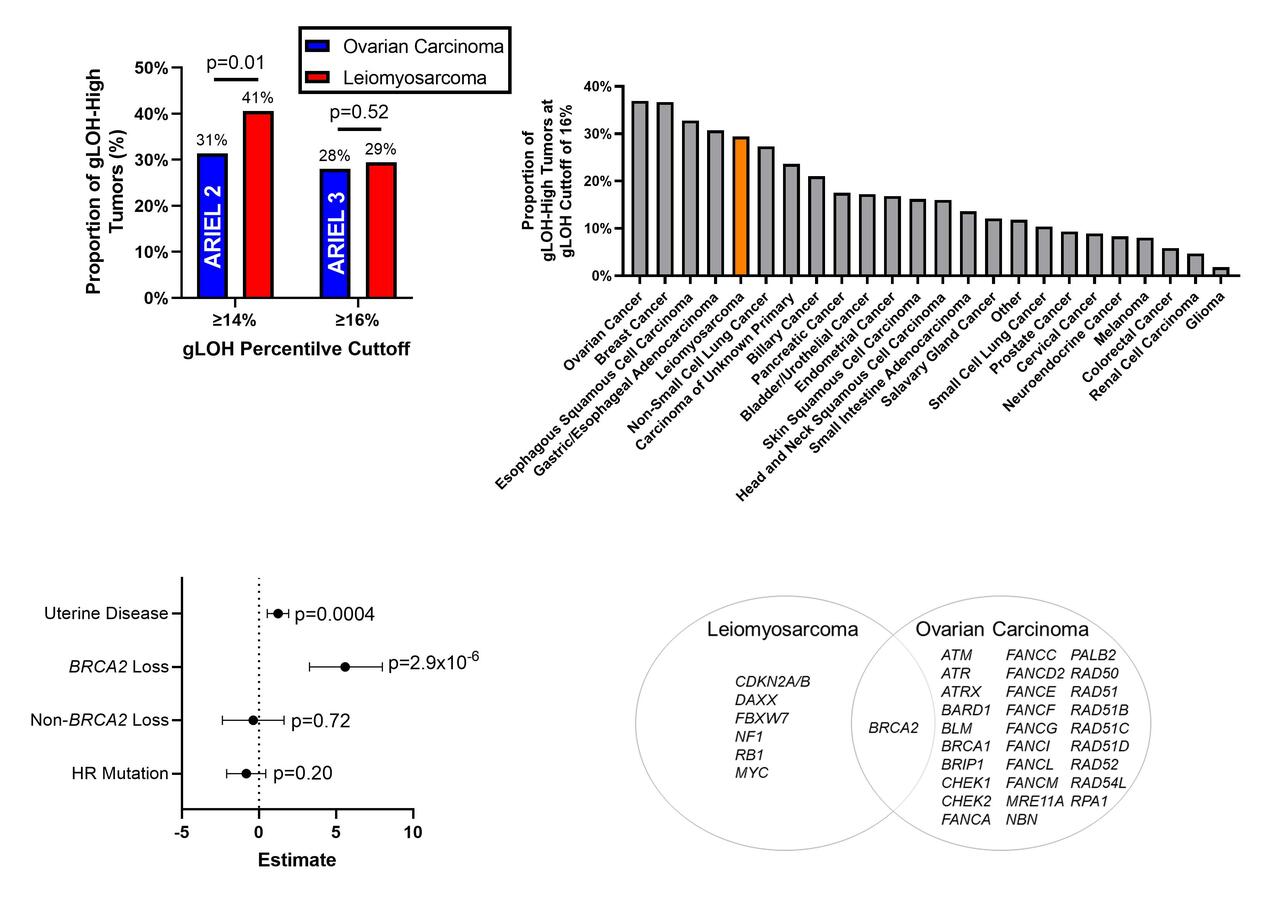 Homologous recombination deficiency (HRD) has been described in leiomyosarcomas (LMS). These findings suggest that HRD, as measured by genomic loss of heterozygosity, is prevalent in LMS but has unique genomic drivers compared to other cancers.