Chemotherapy has greatly improved cancer survival rates, especially in breast cancer patients. However, some chemotherapeutic drugs such as doxorubicin have side effects on the heart, and ~5% of cancer survivors develop heart failure as a consequence of their cancer treatment. Despite decades of research, the underlying mechanism for this toxicity is still not fully understood, and there are neither early imaging techniques nor biomarkers to detect this toxicity before functional decline. Current clinical imaging is limited to detection of cardiac dysfunction and therefore, an imaging tool sensitive to early signs of toxicity in the heart would be desirable to identify patients at risk of developing heart failure before functional decline. This would allow for earlier therapeutic intervention, reducing the onset of heart failure in patients.

Mitochondrial impairment is among the mechanisms proposed to result in cardiac dysfunction, and mitochondrial energy metabolism is vital for the heart to sustain the energy requirements for contractile function. We hypothesised that changes in mitochondrial metabolism may precede cardiac functional decline, and thus serve as an early marker of cardiotoxicity. However, in vivo assessment of mitochondrial energy metabolism is challenging, especially in patients and in real time. A recently developed imaging technique called “Hyperpolarized 13C Magnetic Resonance Imaging” allows us to assess real-time metabolic fluxes in vivo, and may therefore provide the ability to detect  changes in mitochondrial metabolism and function in the doxorubicin treated heart. This technique has been pioneered in the UK in the rodent and human heart by Prof Damian Tyler’s lab at the University of Oxford. My background lies in the use of this imaging technique to assess the metabolic response to chemotherapy in mouse models of cancer (PhD in Prof Kevin Brindle’s laboratory, University of Cambridge). During my Postdoctoral Fellowship in Prof Damian Tyler’s lab, I set out to assess whether hyperpolarized magnetic resonance Imaging could also detect changes in cardiac metabolism due to the side-effects of chemotherapy. Figure 1 shows a prototype hyperpolarizer (Oxford Instruments) from the Tyler lab at Oxford University.

In our paper “Early detection of doxorubicin-induced cardiotoxicity in rats by its cardiac metabolic signature assessed with hyperpolarized MRI”, we show that in a clinically-relevant rat model of doxorubicin-cardiotoxicity, non-invasive imaging with hyperpolarized magnetic resonance can indeed detect early changes in mitochondrial carbohydrate metabolism that precede functional decline (Figure 2). We furthermore show that this decrease in oxidative carbohydrate metabolism is due to a loss of mitochondria as well as a decrease in mitochondrial respiration in the remaining mitochondria. Thus, hyperpolarized magnetic resonance imaging could potentially be translated as a screening tool into cancer patients, allowing for early detection of at-risk patients. In fact, a proof-of-principle clinical trial has just been concluded, showing that hyperpolarized magnetic resonance imaging can also detect a decrease in oxidative carbohydrate metabolism in breast cancer patients receiving doxorubicin chemotherapy1. 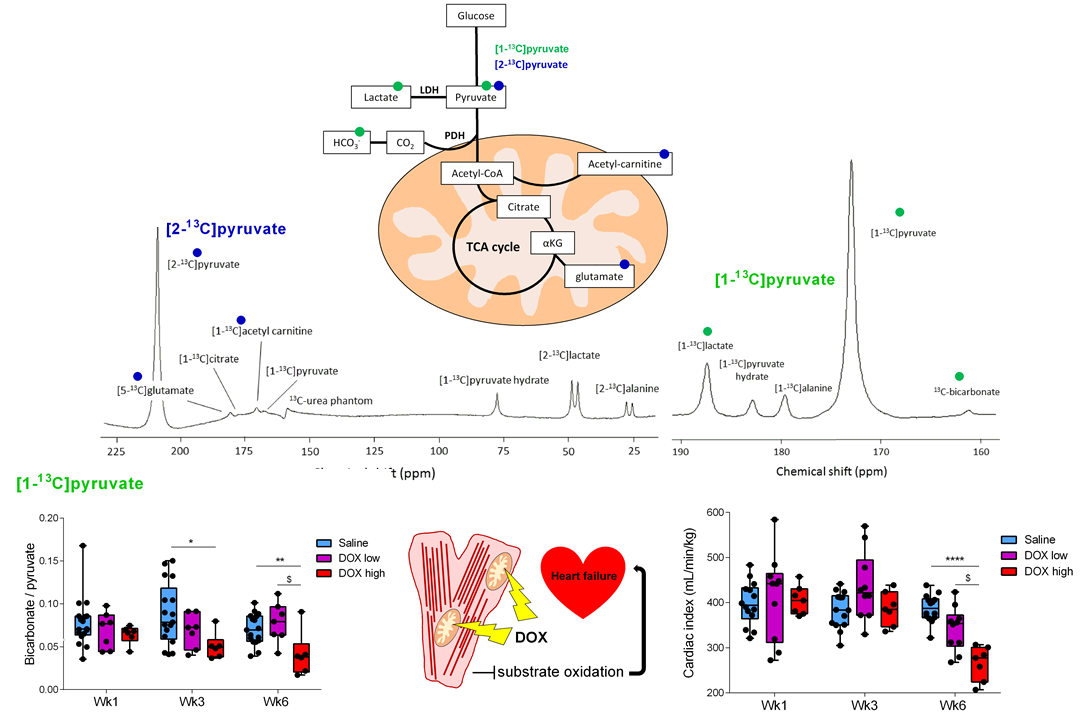