Chromosomal abnormalities are a hallmark of leukaemia, defining specific disease subtypes and correlating with clinical outcomes. Despite being a disease of adulthood, acute myeloid leukaemia (AML) can affect children, with a peak of incidence between the ages of 0 and 2 years (1). Interestingly, specific genetic abnormalities are only encountered in this age group and are totally absent from older children and adults (2). Over the years, increasingly in-depth analyses of leukaemia patient samples of varying ages have uncovered distinct features including transcriptional profiles, mutational landscape, and oncogenic mechanisms, which render each subtype a unique biological entity (3). Nevertheless, targeted therapies for infant-specific cytogenetic subtypes are lacking, with relapse, therapy-related toxicity, and mortality remaining major clinical challenges.

A particular focus of our laboratory has been the chromosomal translocation t(7;12)(q36;p13), which represents up to one third of infant AML cases below the age of 2 (Figure 1A). Since its discovery, the biology of t(7;12) has remained elusive, with the only known molecular consequence being the overexpression of the embryonic gene MNX1. Moreover, patients harbouring this translocation have notoriously poor clinical outcomes, which require research efforts to unravel its biology and tackle novel therapeutic interventions. However, a major constraint of research into t(7;12)-associated infant leukaemia has been the lack of research models (4).

The advent of genome editing technologies, first and foremost CRISPR/Cas9, has revolutionised systems biology, allowing the creation of increasingly accurate genetic modifications that were not possible before. In addition to disrupting or correcting individual genes, the CRISPR system opened a wealth of possibilities owing to the ability to generate chromosomal rearrangements (5). We decided to harness CRISPR/Cas9 to generate the t(7;12) translocation in vitro, in order to address the need for a research model (Figure 1B-C).

Using the well characterised and immortalised K562 leukaemia cell line allowed us to produce a stable tool that could retain the rearrangement and be propagated. Despite being already transformed, the translocation produced highly evident morphological changes linked to the differentiation potential of the cell line, which corresponded to the clinical manifestations of t(7;12) as poorly differentiated AML (Figure 1D). Interestingly, we originally attempted to edit other leukaemia lines (such as Jurkat), which failed to retain the translocation, possibly hinting at the requirement for a specific cellular or developmental background. In fact, K562 cells possess a more embryonic-like background, in virtue of their highly immature differentiation state and the production of foetal haemoglobins.

We further explored the age specificity of t(7;12) by introducing the translocation in healthy CD34+ adult haematopoietic progenitors (HSCPs). The translocation gradually disappeared while in culture and did not provide any survival or proliferative advantage (Figure 1E). In the attempt to provide a microenvironment-like support, CD34+t(7;12) HSCPs were co-cultured with MS5 stroma, but also failed to expand the t(7;12)-harbouring clones. As already reported by others (6,7), the overexpression of MNX1 lacks the ability to transform adult haematopoietic cells.

Nonetheless, the K562-t(7;12) model proved useful in recapitulating key features of t(7;12) AML patients. Based on the observations from Ballabio et al. (8) in t(7;12) patient samples, we were able to prove that the introduction of the translocation caused an altered genomic positioning of the affected loci in interphase nuclei. As seen in patients, the portion of the translocated chromosome 12 containing the MNX1 gene was repositioned towards the nuclear interior, a transcriptionally active compartment, which coincides with its ectopic overexpression. The upregulation of MNX1 in our model, which is a key feature of t(7;12) AML, was particularly remarkable for us, due to the pre-existing high expression of this gene in K562.

We also performed RNA sequencing to identify gene expression changes brought about by the translocation. Despite limited high-throughput transcriptomic analyses of t(7;12) patients, we made use of publicly available RNA sequencing and microarray experiments from the public database TARGET to extract gene expression signatures for t(7;12). Our K562-t(7;12) model recapitulated these signatures compared to the unedited K562 control, which further established that the dysregulation of these genes was linked to the generation of the rearrangement (Figure 1F-G). In addition, we observed an enrichment in cell adhesion processes, which have also been described in t(7;12) patients and linked to the disruption of haematopoietic niche interactions as pathogenetic mechanism (7).

We foresee that our engineered K562 model will help uncover transcriptional and mechanistic features of t(7;12) AML, thanks to its ease in manipulation as a research tool and unlimited lifespan. Our results further reinforced the notion that cellular / developmental background is an important determinant for the effects of t(7;12). In conclusion, our investigation on leukaemogenesis associated with t(7;12) continues, with a clinically-relevant model to faithfully phenocopy this particular subtype of AML. 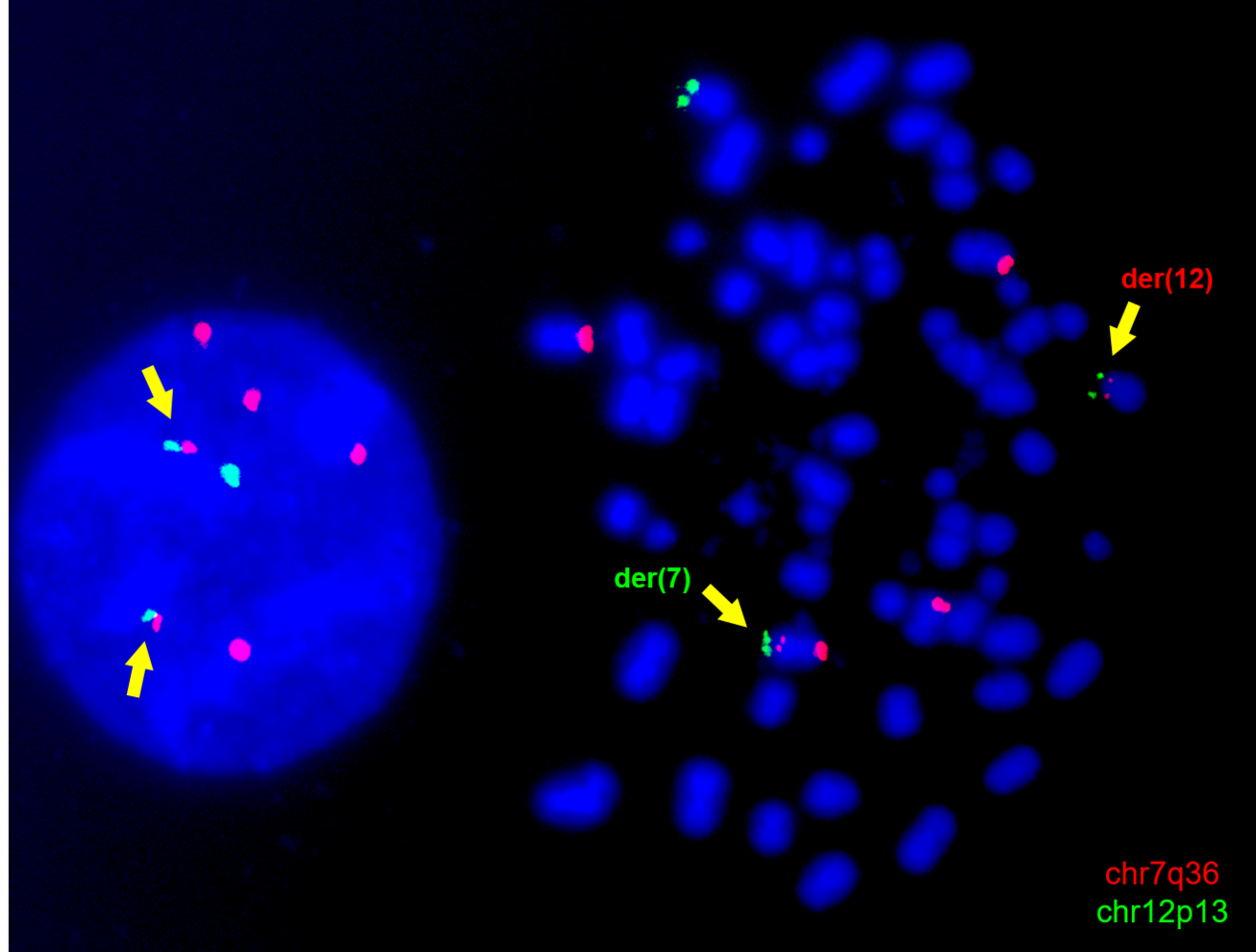