Despite a characteristic indolent course, a substantial subset of follicular lymphoma (FL) patients have an early relapse with a poor outcome. Several prognostic scoring systems have been developed to predict outcome in patients with FL. However, none of them can predict who will fail event-free-survival at 12 or 24 months (EFS12/EFS24), hence they are not routinely used to guide therapeutic decisions.1–3 Gene expression profiling of FL has demonstrated the importance of the tumor microenvironment in predicting disease progression and survival.4 Several immunohistochemical studies attempted to translate these findings to clinical practice by identifying T-cell subsets associated with outcome, however mixed and inconclusive results have been reported.5–9 One potential explanation for this discrepancy might be the evaluation of total, rather than cells in specific locations, such as intra- or peri-follicular biomarker expression. In particular, the immune architectural pattern of T cells within lymph nodes involved with FL has a strong clinical impact, since the topographic distribution of the immune cells reflects their dysregulated function. Based on this assumption, we hypothesized that phenotype and distribution of the immune cells in the tumor microenvironment would predict early failure.

To address this hypothesis, we used a discovery and validation study design to analyze the prevalence of T-cells subsets and macrophages in the pretreatment biopsy specimens of 496 newly diagnosed patients with FL grade 1-3A who were prospectively enrolled into the Molecular Epidemiology Resource (MER) cohort. To explore the relevance of immune cell distribution on the interaction with malignant B-cells, we specifically determined the expression of immune markers inside and outside the malignant follicles. Initially, we stained tissue microarrays of a discovery set of patients (N=166). Markers associated with failing to achieve EFS12/24 at P≤0.15 were then brought forward to validate the positive results in a second cohort of patients (N=330). Then, the immune population associated with outcome was immunophenotypically characterized and spatially located in the follicle using mass cytometry (CyTOF) and the Co-Detection by indEXing (CODEX) multiplex immunofluorescence system. Finally, the influence of the tumor genetic landscape on the microenvironment was assessed by digital multiplex gene expression profiling (NanoString technology) platform on the same matched patients.3

We have leveraged the characterization of the immune microenvironment of follicular lymphoma to suggest a novel predictive model, termed BioFLIPI, which integrates biologic and clinical features. By adding the intrafollicular CD4+ expression to the well-established clinical risk model, FLIPI, we developed an improved prognostic algorithm that can help to guide therapeutic decisions for newly diagnosed FL patients. Favorable-risk groups showed an indolent disease course and these patients therefore might be observed or receive lower-intensity approaches, while high-risk groups had an early relapse which suggests a need for more intensive treatment, or for clinical trials with novel agents, and consideration for maintenance therapy. Although the BioFLIPI demonstrated superior prognostic value than the FLIPI, 44% of the two Bio-FLIPI high risk groups still achieve EFS24, suggesting that additional events influence the distinct biological behavior.

While our model underlines the importance of tumor microenvironment, we reason that it may be influenced by the genetic composition of tumor. For example, the highly recurrent CREBBP mutation has been associated with reduced expression of antigen presentation machinery and impaired immune surveillance.10 Along the same lines, it is possible that CREBBP mutations might lead to a lack of intrafollicular CD4+ expression as part of the same immune escape mechanism. Remarkably, we found that CD4+ expression, BioFLIPI and the genetic risk model 23-GEP scores were independently prognostic. This highlights that the tumor genetic features and the CD4+ T-cell infiltration are both factors of importance for the outcome of FL patients. However, future studies will be needed to standardize the assessment of intrafollicular CD4+ expression, validate the prognostic value of the BioFLIPI risk model in independent patient cohorts, and integrate tumor genetic features into this biological model.

The BioFLIPI represents a promising predictor of treatment outcome in newly diagnosed FL patients that incorporates biological and clinical features, but it will need independent validation and eventually combination with genomic factors. While additional investigation to determine the mechanisms behind the reduced or absent expression of CD4+ T-cells inside the lymphoma follicles is warranted, the prognostic power of the BioFLIPI will be useful in the design of clinical trials as it identifies patients at the highest risk of early failure who may benefit most from more intensive therapies or novel frontline regimens. 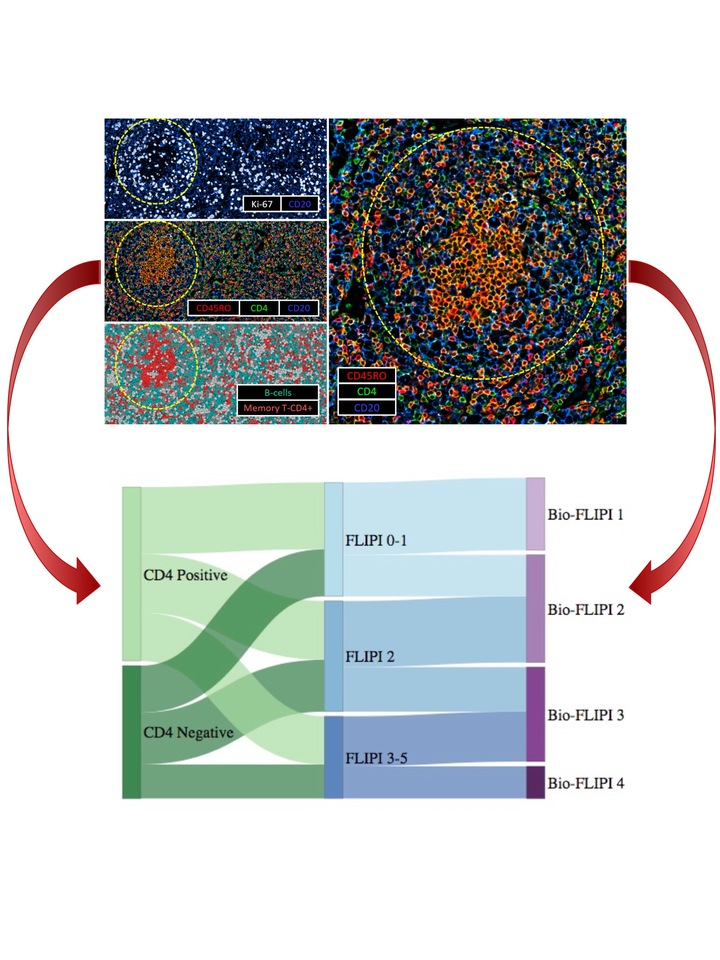