Extending Survival for Patients with Myelofibrosis

Patients with myelofibrosis, a rare blood cancer, are predicted to live roughly 6 years on average from the time of diagnosis. A major breakthrough in the treatment of myelofibrosis was made just over a decade ago with the development and approval of the first JAK inhibitor for this indication (ruxolitinib), which targets key drivers of disease pathophysiology. Notably, while JAK inhibitors can reduce myelofibrosis-related symptoms and splenomegaly, they do not improve anemia, which is a critical negative prognostic factor. Patients with mild, moderate, and severe anemia experience shortened median survival of 4.9 years, 3.4 years, and 2.1 years, respectively, and the risk of death is 1.5-fold higher in severely anemic versus moderately anemic patients.

Momelotinib is a unique JAK inhibitor in that it not only inhibits both JAK1 and JAK2, but also the iron regulator ACVR1 resulting in reduced hepcidin and increased red blood cell formation. Through this distinctive mechanism of action, momelotinib has demonstrated clinical activity against symptoms and splenomegaly, and confers substantial anemia benefits including conversion to and maintenance of durable transfusion independence, reductions in transfusion burden, elevated hemoglobin levels, and fewer adverse events of anemia in phase 3 clinical trials.

Although a primary goal in treating myelofibrosis is to alleviate symptoms and thereby improve day-to-day function and maximize the quality of life of patients, an ultimate aspiration is to prolong patient survival. We don’t yet have a full grasp on which treatment options may maximize survival for which myelofibrosis patient populations, as the treatment landscape continues to expand with newly approved agents, and genomics technologies continue to advance. In our study recently published in Leukemia, we sought to better understand the overall and leukemia-free survival profiles of patients treated with momelotinib, and whether survival is linked to baseline characteristics or week 24 clinical responses. To this end, we analyzed data from both the SIMPLIFY-1 and SIMPLIFY-2 phase 3 trials, including from patients who continued to receive open-label momelotinib through an ongoing extended access protocol, some of whom have remained on therapy for more than 12 years.

I served as the primary investigator for SIMPLIFY-1, a head-to-head comparison of momelotinib versus the standard-of-care JAK inhibitor, ruxolitinib, in JAK inhibitor-naïve patients with myelofibrosis. SIMPLIFY-2 tested momelotinib versus best available therapy (which was 88.5% ruxolitinib) in JAK inhibitor-exposed patients. Both studies allowed for cross-over to open-label momelotinib at week 24, confounding a direct comparison between study arms for survival endpoints. Nonetheless, these clinical data provide key insights into survival outcomes of patients who received extended momelotinib treatment.

As reported in our publication, extended treatment with momelotinib is associated with excellent survival, regardless of initial randomized therapy. In SIMPLIFY-1, the median overall survival was not reached and the 5-year survival probability was ~55% in both arms; in SIMPLIFY-2, the median overall survival of ~3 years and the 2-year survival rate of ~61-66% observed demonstrate excellent survival post-ruxolitinib in this clinical trial setting. Notably, momelotinib has a favorable hematologic safety profile that enables high dose intensity to be maintained over long treatment periods, potentially contributing to the durability of clinical benefits including long-term survival.

We also report a new finding that transfusion independence response at week 24 in JAK inhibitor-naïve, momelotinib-randomized patients in SIMPLIFY-1 was significantly associated with improved overall survival, which may have clinically relevant implications for future treatment decision-making. As momelotinib has demonstrated higher rates of transfusion independence compared with ruxolitinib, and because momelotinib may be given at full dosage for longer, momelotinib may be the optimal treatment choice to maximize survival in certain subsets of patients with myelofibrosis. Further, anemia and the importance of managing anemia may become a more central consideration when evaluating treatment options, and momelotinib is uniquely positioned to fill the critical gap of addressing anemia in myelofibrosis patients.

Subsequent to the SIMPLIFY studies, the phase 3 MOMENTUM trial was conducted to confirm the differentiated clinical benefit of momelotinib versus danazol in symptomatic, anemic patients with myelofibrosis who previously received but had discontinued JAK inhibitor therapy. Recently released topline results at week 24 indicated that MOMENTUM met all pre-specified primary and key secondary endpoints with statistical significance, confirming momelotinib’s ability to provide symptom, spleen, and anemia benefits in an advanced myelofibrosis patient population. This study also allowed for cross-over to open-label momelotinib at week 24, and long-term survival will be analyzed in future analyses.

Because the cross-over design inherent to these trials precludes us from directly comparing treatment outcomes past week 24, we anxiously await the results from a key study that is now underway comparing overall survival between patients treated with momelotinib in SIMPLIFY-1, SIMPLIFY-2, and MOMENTUM cohorts and patients treated with ruxolitinib or fedratinib in external comparator cohorts identified within real-world data. While we still have much to learn, we are experiencing an exciting time of expanding treatment options available for patients with myelofibrosis. 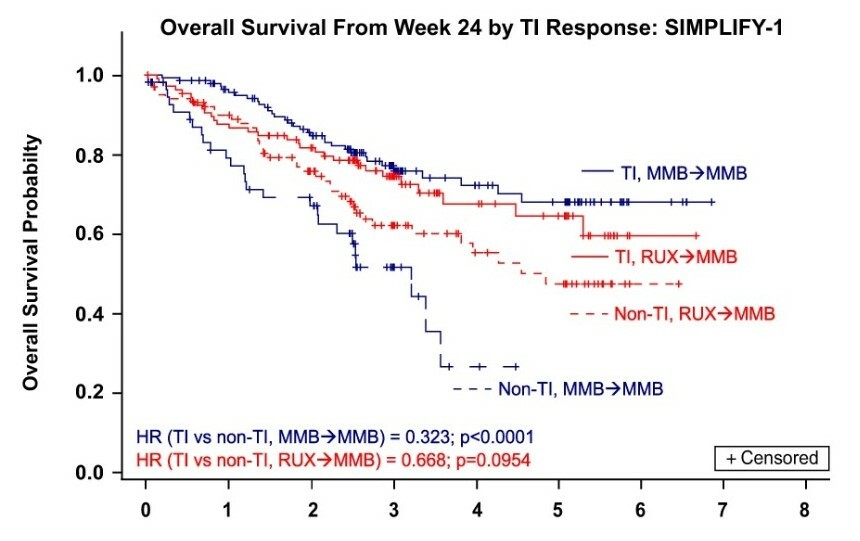 Extending Survival for Patients with Myelofibrosis