In mouse models of breast cancer, periodic fasting or fasting-mimicking diet (FMD) enhances the efficacy of endocrine therapy and can help to delay or even reverse acquired resistance to it. In patients with breast cancer, the FMD promotes metabolic changes analogous to those observed in mice. 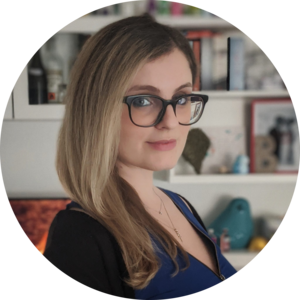 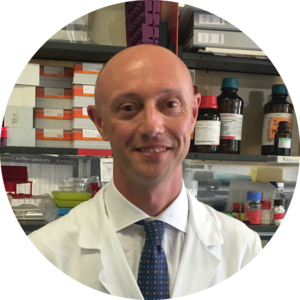 Full Professor of Geriatrics and Internal Medicine, University of Genoa

Fasting and fasting-mimicking diets (FMDs) are among the most promising complementary approaches in oncology given their ability to make chemotherapy more active and better tolerated, to trigger anticancer immunity, and to exert pro-regenerative effects in many tissues1,2. In this context, we previously showed enhanced effects of tyrosine kinase inhibitors through fasting within a collaboration with the Longo laboratory at the University of Southern California (USC)/Istituto FIRC di Oncologia Molecolare (IFOM)3.

Our exploration of the value of fasting in combination with endocrine therapy (ET) for breast cancer (BC) started in 2014, when Prof. Alessio Nencioni, my supervisor, encouraged me to test the combination of starvation conditions in combination with fulvestrant or with tamoxifen, two commonly used types of ET, in cultured hormone receptor positive (HR+) BC cells and then in BC xenografts. According to Alessio, there was a strong rationale for combining periodic fasting with ET, given the cross-talk between oestrogen receptor activity and insulin/IGF1 signaling4, on the one hand, and the ability of fasting to reduce the latter factors1, on the other. Not only did I see that weekly 48-hour fasting cycles potently enhanced tamoxifen and fulvestrant anticancer activity, but we also found that a short-term (one month) treatment with combined ET and fasting exerted a strong carry-over anticancer effect: 14-28% of my MCF7 xenografts completely regressed during the observation period following our short-term treatments with combined fasting and ET, an effect that I could never observe in response to just ET or weekly fasting. Thus, these findings suggested that combining fasting and ET was possibly leading to a conditioning of our animals that created unfavourable conditions for breast cancer growth. Eventually, using in vitro experiments at first (based in part on the work of the Longo lab showing the effects of fasting on IGF1 and insulin2,5), I established that the circulating factors that became reduced through combined fasting and ET, mediating the cooperation between these interventions (including the observed carry-over antitumour activity), were IGF1, insulin6, but also leptin, an adipokine that acts as a growth factor for BC cells and reduces ET efficacy7-9. I also found that combined ET and fasting led to the upregulation of the tumour suppressor PTEN and to the consequent inhibition of AKT and of mTORC1 activity in HR+ BC cells. Alessio and I identified the transcription factor EGR1 as the protein mediating PTEN upregulation, AKT inhibition and the synergistic antitumour activity of fasting and ET in BC cells, and went on to show that EGR1 became upregulated in response to our combined treatments due to reduced AKT activity. Thus, our data indicated that EGR1 and AKT act in a diode, negatively regulating each other, in HR+ BC cells, and that combining fasting with ET causes EGR1 to prevail on AKT (Fig.1). 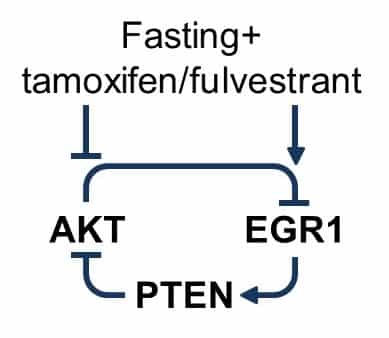 Based on these data and on the clinical efficacy of the combination of blockers of oestrogen signalling with CDK4/6 inhibitors10, Prof. Longo and his graduate student, Vanessa Spagnolo, from the IFOM in Milan reasoned that a triple treatment including fulvestrant, the FMD, plus palbociclib (a CDK4/6 inhibitor) could possibly further improve the anticancer effects we had observed in our models with just fasting and ET. Thus, they started experiments to define whether this new combination would cause more extensive tumour regressions and reverse resistance to the standard pharmacological therapy. For this new set of experiments, the Longo lab used the FMD regime, which they had found to have strong anticancer effects in mice and to be much better tolerated by healthy subjects compared to water-only fasting 11,12. In the meantime, I also performed experiments with the FMD provided by Prof. Longo in Alessio’s lab, and found that the latter was as effective as fasting i) in enhancing ET activity, ii) in reducing IGF1, insulin and leptin (leptin and IGF1 reduction persisted beyond the FMD period) and iii) in leading to long-lasting anticancer effects when combined with tamoxifen or fulvestrant. In addition, I found that the FMD prevented acquired resistance to tamoxifen in my MCF7 xenograft-bearing mice. Vanessa found that periodic cycles of the FMD were as effective as the CDK4/6 inhibitor, palbociclib10, in delaying resistance to fulvestrant. More importantly, she was able to show that the combination of fulvestrant, FMD and palbociclib was the only regimen capable to lead to a steady and long-lasting regression of MCF7 BC cell xenografts. Just as interestingly, Vanessa discovered that the FMD cycles were able to reverse acquired resistance to the fulvestrant plus palbociclib regimen.

Prof. Longo had an important role in the design of the add-back experiment through which confirmed the role of reduced insulin, IGF1 and leptin (“fasting-reduced factors”) in the potentiation of ET through the FMD in vivo. Specifically, the idea of performing this test as a “crossover” experiment came from him and ultimately led to very strong and convincing results: both Vanessa and I in independent experiments at IFOM and in Alessio’s lab at the University of Genova, respectively, found that adding back any of these factors in MCF7 xenograft-bearing mice treated with fulvestrant plus FMD was sufficient to completely abolish the FMD-induced enhancement of fulvestrant activity. Withdrawing the factors “at crossover” (day 35 in my mouse experiment shown in Figure 1 of the article) restored tumour sensitivity to ET plus FMD, while administering insulin, IGF1, or leptin to mice that until then had only received fulvestrant plus FMD stimulated tumour growth and abrogated fulvestrant potentiation through the diet. Collectively, our data indicated that the ability of fasting/FMD to make ET more active resided in their ability to simultaneously downregulate several growth-promoting factor, including, at least, insulin, IGF1 and leptin.

In addition to these studies in cancer models, in experiments with mice treated with tamoxifen, I found that periodic fasting or FMD effectively prevented tamoxifen-induced endometrial hyperplasia (a relatively common side effect of tamoxifen for which only limited preventive options are available13) by inhibiting AKT in the uterus and that the combination of weekly fasting/FMD and tamoxifen strongly reduced the intra-abdominal fat depots in the mouse, which probably also explains the leptin-lowering effect of this regime.

In two clinical studies, one performed by Alessio and by Francesca Valdemarin, a young nutritionist, at our hospital in Genoa (NCT03595540) and the other one performed by Claudio Vernieri and Filippo De Braud at the Fondazione Istituto Nazionale dei Tumouri in Milan (NCT03340935), FMD regimens were found to be well-tolerated in women receiving ET for BC and to recreate the metabolic changes that we had observed in animals. Specifically, the FMD effectively lowered insulin, IGF1, and leptin, with IGF1 and leptin remaining low for extended periods (as we had documented in the mouse). In the former study, the introduction of a daily light muscle training to enhance muscle anabolism (as suggested by Prof. Longo and developed by Dr. Annalisa Arrighi) coupled to dietary recommendations to avoid malnutrition14 during the periods between FMD cycles were probably the reason for the beneficial changes in body composition observed in patients undergoing the FMD, including increased phase angle and lean body mass, lower fat mass, stable body weight. The latter results represent another remarkable finding of our study, especially considering the concerns surrounding the use of fasting/FMDs in oncology14.

Large, randomized clinical trials are now required to determine the effect of the FMD as an adjuvant to ET in patients with HR+ BC.

We are especially indebted with my lab partners from Alessio’s lab who contributed to the experiments for this study, particularly with Pamela Becherini (now a postdoc in Michele Cea’s lab at our University); with Chiara Zucal and Alessandro Provenzani, from the CIBIO (Trento, Italy), for their help in identifying the transcriptional effects of combined ET and fasting in BC cells, as well as for their tests of oestrogen receptor activity; with Else Driehuis and Hans Clevers, from the Hubrecht Institute (Utrecht, The Netherlands), for performing experiments with their HR+ BC organoids; with Dr. Samir Sukkar, from the Clinical Nutrition Unit of the Ospedale Policlinico San Martino, for his input in the clinical study of the FMD that was carried out in Genoa; with Lorenzo Ferrando, PhD student at the University of Genoa, for his help with the statistical analyses of our article; with our pathologists from the University of Genoa, Valerio G. Vellone and Luca Mastracci, for their analysis of tumour xenografts and of mouse uteri; with Dr. Claudio Vernieri for contributing to our study with data from his NCT03340935 clinical trial; with Alberto Tagliafico (University of Genoa) for the body composition analyses by CT scans; with Sebastian Brandhorst, Min Wei, and several other members of the Longo laboratory at USC/IFOM, who contributed to the experiments and figures of this study; with the patients who trusted us and agreed to be enrolled in our clinical trial; with the reviewers of our article, who prompted us to perform key experiments during the revision phase; and with the Associazione Italiana per la Ricerca sul Cancro (AIRC), the Fondazione Umberto Veronesi and the Breast Cancer Research Program of the US Department of Defense for supporting our research.

A comprehensive study by the GECCO and CCFR consortia of somatic mutations in over 2,000 colorectal cancer cases