FOLFIRI plus cetuximab or bevacizumab for advanced colorectal cancer: final survival and per-protocol analysis of FIRE-3, a randomized clinical trial

Metastatic colorectal cancer (mCRC) is responsible for approximately 230.000 deaths per year in Europe 1,2. The prognosis in metastatic disease is still devastating with a five-year survival rate of 10-15%. Within microsatellite stable (MSS) mCRC cases there are three molecular distinct prognostic groups defined by mutations in either one of the RAS genes (KRAS and NRAS Exon 2-4) or in BRAFV600E. The double wild-type cohort has the best prognosis, followed by the RAS mutant cohort ad the BRAFV600E cohort having the worse prognosis. As the EGFR (epithelial growth factor receptor) antibodies Cetuximab and Panitumumab lack efficacy in RAS mutant mCRC patients3, the test of these mutations have to be done prior to decide first-line regimen to ensure to apply the most effective therapy in first-line and to plan a reasonable treatment sequence. Furthermore, the location of the primary tumour has been defined as a major prognostic factor 4. Tumours originating of the right colon (Caecum, Ascending colon, Hepatic flexure, Transverse colon) have shorter overall survival times than left sided (Splenic flexure, Descending colon, Sigma, Rectum). Further analyses revealed an additional predictive effect for the use of the EGFR antibodies cetuximab and panitumumab5.

The randomized open-label phase-III FIRE-3 (AIO KRK-0306) study investigated within the RAS wild-type cohort of non-resectable mCRC patients the efficacy of FOLFIRI Cetuximab vs. FOLFIRI Bevacizumab 6. As both, the EGFR) antibody Cetuximab and the VEGF (vascular endothelial growth factor) antibody bevacizumab are approved in this setting this head-to-head comparison was necessary to evaluate the best treatment option for RASwt mCRC patients. Of 752 Patients, 400 had a RASwt tumour and were treated with either FOLFIRI Cetuximab (n=199) or FOLFIRI Bevacizumab (201). Within the cohort of patients evaluable for response (n=352), the primary endpoint overall response rate (ORR) according to RECIST 1.0, was in favour of cetuximab treated patients reaching 77% when compared to bevacizumab (65%) treated patients (p=0.014). This translated into a significant median overall survival (OS) benefit for FOLFIRI and Cetuximab treated patients (33months vs. 26months; HR= 0.75; p= 0.011). Unexpectedly, median progression free survival times were comparable (11 months vs. 10 months, HR 0.99; p>0.99) but early tumour shrinkage (70% vs. 50%; p= 0.0004) and depth of response (50% vs. 33%; p<0.0001) were both in favour of cetuximab treated patients. These differences in favour of the cetuximab arm were even more pronounced in the subgroup of left sided tumours (n= 273) where ORR were 79% and 68% (p= 0.04) and median OS times were 38months and 28months (p= 0.01) respectively.  No significant differences were observed between the two treatment arms for right sided tumours (n= 75).

The FIRE-3 study and other first-line studies such as the ALLIANCE CALGB 80405 have shown a significant survival benefit for the use of EGFR antibodies in first-line in RASwt mCRC patients when compared to the use of the VEGF antibody bevacizumab. This benefit is limited to tumours originating from the left colon (Splenic flexure, Descending colon, Sigma, Rectum) but is of high clinical significance. Guidelines such as NCCN and ESMO7 therefore recommend the use of EGFR antibodies combined with either FOLFOX or FOLFIRI in first-line for left sided RASwt mCRC patients. 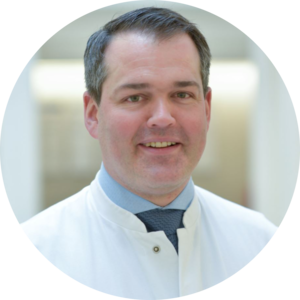