Since the discovery of splicing factor mutations in cancers, large-scale studies continue revealing new somatic alterations of components of the RNA splicing machinery in human malignancies [1]. These findings contribute to cancer research as well as to a better understanding of splicing, identifying key genes and indicating functional sites and interactions.

Our work identifies the splicing factor SUGP1 to be recurrently mutated in cancers and as a new and important actor for correct 3’ splice site (3’ss) selection. The most frequently mutated splicing factor in cancers, SF3B1, is essential to provide correct positioning of the splicing complex to the acceptor site. We and others have previously shown that SF3B1 mutations result in corrupt branchpoint recognition and usage of cryptic 3’ss for a subset of splice junctions (so called 3’ ss aberrant splicing pattern) [2-4]. Here we demonstrate that SUGP1 somatic alterations in cancers phenocopy SF3B1 mutations.

Recurrent alterations in SUGP1 associated with aberrant splicing pattern were detected from the TCGA RNA-seq screening for aberrant junctions using a k-mer approach (Sequence Bloom Tree on the Seven Bridges Cancer Genome Cloud [5-6]) (Fig. a). Nine tumors displaying 3’ss aberrations as observed in SF3B1 mutants were found not mutated in SF3B1, and among them, 7 tumors were found altered in SUGP1 by missense mutations (4 cases), stop-gain mutation (1 case) and extremely reduced expression (2 cases) – all associated with Loss Of Heterozygosity (LOH) of the SUGP1 locus (Fig. b). Overall impact of cancer SUGP1 alterations on splicing was demonstrated to be not distinguishable from that of SF3B1 mutations in the lung adenocarcinoma (LUAD) cohort, in which 5 samples were mutated for SUGP1 and 6 for SF3B1, largely sharing the repertoire of aberrant 3’ss junctions usage (Fig. c).

We validated this finding by modeling SUGP1 KD in HEK293T cell line (Fig.d) and the tumor SUGP1 status (LOH plus mutation) by CRISPR/cas9 in a haploid isogenic cell line (Fig. e). Both experiments fully reproduced the tumor splicing phenotype of SF3B1 mutations. siRNA-knockdown of the SUGP1 combined with expression of mutant SUGP1 (p.P636L) further increased the proportion of aberrantly spliced reporter junctions (Fig. e). These experiments elucidated the respective role of reduced SUGP1 expression by LOH and of hypomorphic mutations found combined in tumors. 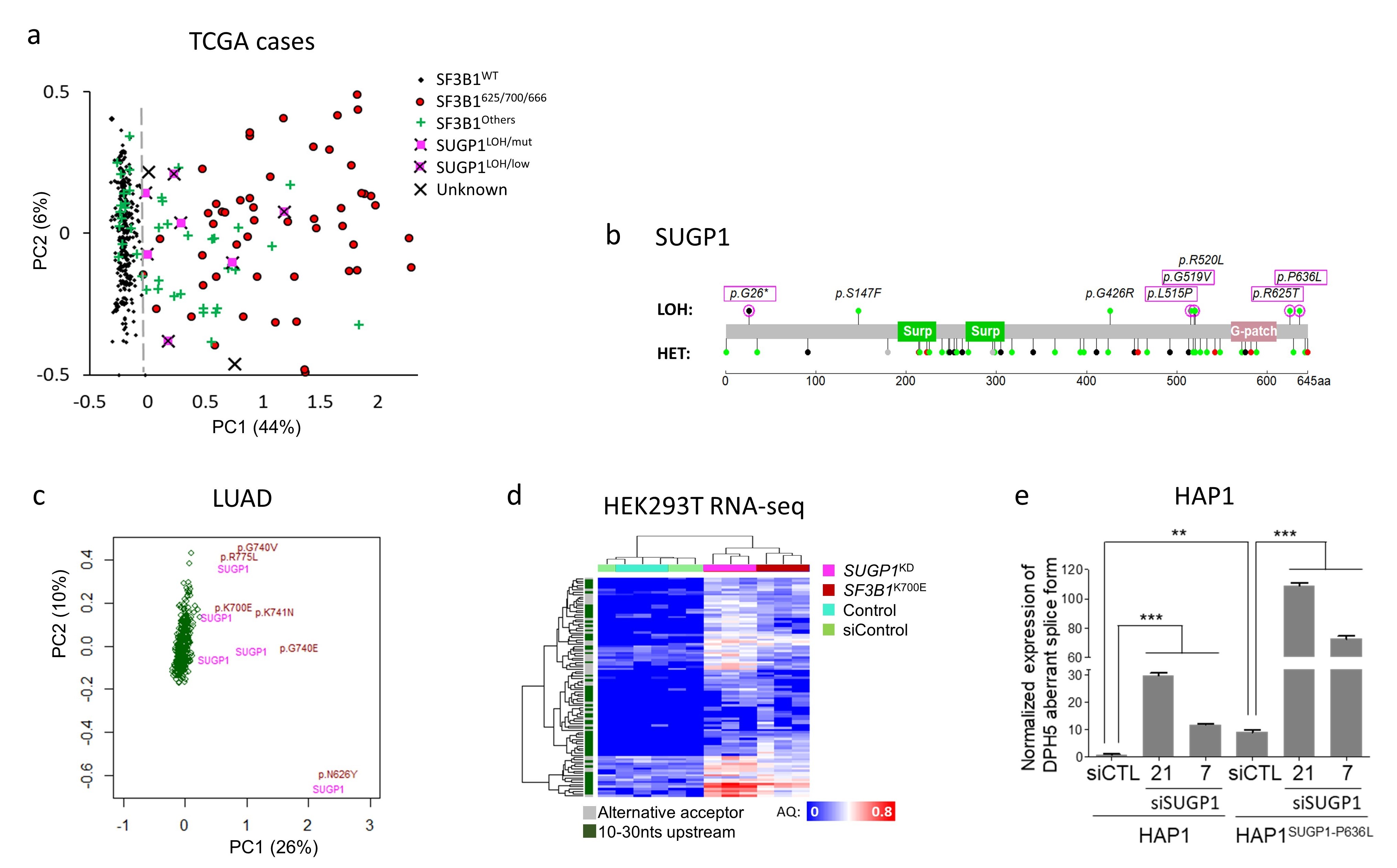 Recently Zhang et al. demonstrated that SUGP1 interacts with SF3B1 and SF3B1 hotspot mutations disrupt this interaction; experimental models included SUGP1 KD and double mutations in G patch domain of SUGP1, which is supposed to play a role in promoting correct 3’ss usage [7]. Our data are in line with this finding, however, 5 cancer mutations in SUGP1 associated with LOH were missense mutations located before and after its G-patch domain. Therefore, SUGP1 alterations may be stringently selected in cancer for their reduced activity compatible with cell survival and required for oncogenesis.

Our work also confirms the results of Liu et al. [8], extending them by demonstrating no detectable difference between SF3B1mut and SUGP1alt splice aberration patterns in cancers and in cellular models, which provides a broad understanding of splicing de-regulation in oncogenesis.