Breast cancer is the most common cancer in women in the UK, and estimates suggest 1 in 7 women will develop breast cancer in their lifetime1. Growing older is the main risk factor, but epidemiological evidence also suggests a role for endogenous hormones2,3. Younger age at menarche, older age when you first give birth, nulliparity and older age at menopause are all thought to influence breast cancer risk by altering exposure to sex hormones.

Genetic factors influence the level of endogenous hormones4,5,6 in both premenopausal and postmenopausal women. Thus, variations in genes involved in sex steroid synthesis or metabolism are good candidates for breast cancer predisposition alleles7.

We have previously identified genetic variants, at the CYP3A gene cluster on chromosome 7 at 7q22.1, that are significantly associated with lower levels of urinary oestrone-3-glucuronide in premenopausal women of European ancestry8. Further genetic fine mapping identified a cluster of variants that define the CYP3A7*1C allele as potentially causal9.

Those initial studies focused on genes which encode key regulatory components of the sex steroid synthesis and metabolism pathways. To investigate whether other genetic variants play a role in influencing levels of premenopausal hormones, we carried out a genome-wide association study of urinary oestrone-3-glucuronide and pregnanediol-3-glucuronide levels in premenopausal women.

We found that the CYP3A7*1C allele dominates the genetic architecture of hormone levels in premenopausal women. The CYP3A7 locus on chromosome 7 was the only highly significant association (figure shows a Manhattan plot of single nucleotide polymorphism (SNP) associations with luteal phase urinary oestrone-3-glucuronide levels); the rare allele (European minor allele frequency = 0.04) was associated with a 49.2% reduction in oestrone-3-glucuronide and explained 11.5% of the variation in levels. In a subset of women for whom we were able to measure progesterone, this allele was also associated with significantly lower levels.

To determine whether this allele was also a breast cancer predisposition allele, we tested for an association with breast cancer risk. The Breast Cancer Association Consortium provided the necessary large numbers of cases and controls for such an analysis. Pooling germline genotype data from multiple studies, totalling ~91,000 cases and ~90,000 controls, we showed that this allele was associated with a 14% reduction in risk of ER+/PR+ breast cancer.

The CYP3A genes encode enzymes that play a role in the metabolism of hormones and many of the agents used in treating cancer10. CYP3A7, usually only expressed in the foetus11, is however, expressed in adult CYP3A7*1C carriers12, and might influence metabolism of hormones and drugs in these individuals. Could this impact disease outcome? We found some evidence that, in breast cancer cases who were treated with a taxane, CYP3A7*1C carriers had reduced breast cancer-specific survival compared with non-carriers.

By bringing together data from a large number of studies in many countries, we’ve shown a definitive association between a genetic variant, hormone levels and breast cancer risk. Understanding the interplay between hormones and breast cancer risk is important for prevention as several of the interventions offered to high risk women target these pathways, as do the choices that women make regarding contraception and hormone replacement therapy. 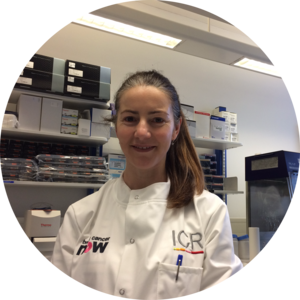