Primary Plasma Cell Leukemia (pPCL) is a rare form of multiple myeloma and is undoubtedly the most aggressive variant. It is characterized by an aggressive disease course with >20% peripherally circulating plasma cells and poor clinical outcome.
cschinke
Assistant Professor of Medicine, University of Arkansas for Medical Sciences
Follow

Despite the advances of modern anti-myeloma therapy, pPCL patients continue to experience low overall survival rates and the majority of patients die before 24 months of disease diagnosis. Given that most patients with multiple myeloma nowadays survive beyond 5 years, the aggressive behavior of pPCL suggests a distinct biological background.

Due to its low incidence of 1-2% of all multiple myeloma patients, studies on pPCL pathology remain challenging and are limited.  To elucidate the differences in biology and outcome between multiple myeloma and pPCL patients we performed whole exome sequencing and gene expression profiling on newly diagnosed pPCL patients and compared their molecular landscape to myeloma patients that did not have pPCL.

Our work showed that pPCL was highly enriched for genetic and molecular high risk features. Adverse risk cytogenetic aberrations included in particular a significantly higher proportion of translocation t(14;16) and duplication 1q in pPCL. Copy number alterations in the pPCL cohort showed similarly a higher percentage of poor risk features, such as deletion of 1p, 6q, 13q, 16q and 17p compared to MM. Hyperdiploidy, defined by the gain of at least two odd chromosomes, which has been associated with good risk, was less prevalent in pPCL patients compared to their MM counterparts.  Furthermore, mutational analysis showed that poor risk TP53 mutation and bi-allelic inactivation of TP53, were seen at a very high percentage in pPCL patients. Lastly, gene expression analysis of pPCL cells showed a significant upregulation of genes that have been previously shown to play an important role in cancerogenesis, including TAGLN2, RUNX2, CD44 and PHF19. Most of the significantly downregulated genes were adhesion molecules present in the extracellular matrix, giving one possible explanation of how pPCL cells become detached and independent of the surrounding bone marrow microenvironment.

Taken together our study adds valuable insight into the molecular landscape of pPCL and shows that pPCL is enriched for adverse risk genetic events, yet is still characterized by significant heterogeneity. While there are no distinct genetic features that distinguish pPCL from multiple myeloma, pPCL is characterized by the accumulation of high risk genetic events that lead to a distinct clinical picture evident by therapy resistance and poor overall prognosis. The elucidated pathways and candidate genes demonstrated in this work could be useful for novel future therapeutic approaches. 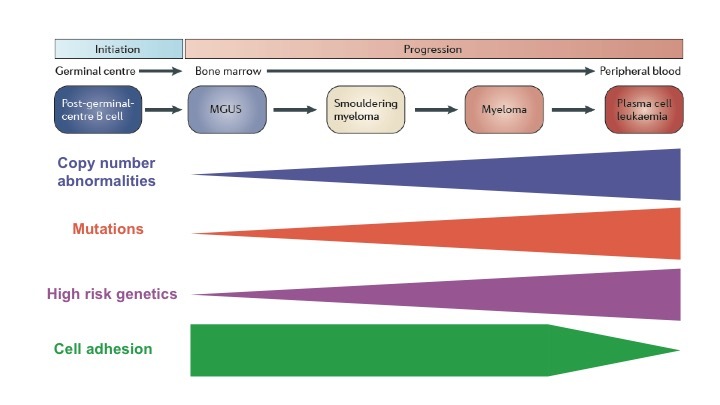 Primary Plasma Cell Leukemia (pPCL) is a rare form of multiple myeloma and is undoubtedly the most aggressive variant. It is characterized by an aggressive disease course with >20% peripherally circulating plasma cells and poor clinical outcome.