In this study, we showed that combining the second-generation FLT3 inhibitor gilteritinib with the dual PI3K/HDAC inhibitor CUDC-907 synergistically improved anti-leukemic activity against FLT3-ITD acute myeloid leukemia (AML) – and that each agent reciprocally overcame resistance to the other drug.

AML is an aggressive malignancy defined by the presence and clonal proliferation of immature myeloid-lineage cells. Among adults, AML accounts for approximately one-third of all leukemia diagnoses and one-third of leukemia-related deaths.1 In children, AML constitutes approximately one-fifth of acute leukemias, but is responsible for more than half of leukemia-related deaths.1 The prognosis of AML therefore remains unacceptably grim, with 5-year overall survival rates of approximately 65% for children, and 27% for adults.1 Fortunately, however, a deepening understanding of AML’s cytogenetic and molecular landscape has allowed for the development of promising new pharmacologic agents. By specifically targeting key oncogenic drivers, these therapies offer both improved clinical outcomes and generally favourable toxicity profiles (particularly in comparison to “classical” chemotherapeutic agents).

One such gene is FMS-like tyrosine kinase 3 (FLT3) – which encodes a ligand-activated, transmembrane receptor – which is expressed on hematopoietic stem cells and immature lineage-differentiated progenitors. Wild-type FLT3 dimerizes and activates upon ligand-binding, resulting in activation of downstream cellular pathways including MAPK/ERK, PI3K/AKT, and JAK/STAT.2 However, in patients with FLT3-mutated AML, FLT3 is constitutively active, leading to uncontrolled proliferation of the AML clone. Although several FLT3 mutations exist, the most common (and most deleterious) is internal tandem duplication (ITD) within the juxta-membrane domain. FLT3-ITD AML carries a particularly grim prognosis, and directly inhibiting FLT3 is therefore an attractive therapeutic option.

Gilteritinib is a second-generation FLT3 inhibitor, with both improved selectivity and potency compared to earlier agents, conferring an improved toxicity profile and potentially superior efficacy. It was approved by the United States Food and Drug Administration (FDA) in November 2018 for treatment of adult patients with relapsed/refractory AML and a FLT3 mutation.3 However, resistance to FLT3 inhibition has been documented, and may occur in multiple ways – in particular, via FLT3 overexpression.4 The ADMIRAL trial (NCT02421939), upon which gilteritinib’s US FDA approval was based, showed statistically significant but relatively short improvements in median overall survival (OS) and event-free survival (EFS).5 Among patients treated with gilteritinib plus chemotherapy, OS and EFS were improved by 3.7 months and 2.1 months, respectively, as compared to chemotherapy alone.5 Although the emergence of resistance mechanisms was not specifically examined in that trial, the authors acknowledged that resistance to FLT3 inhibition is an emerging, important concern, and one which may have impaired clinical response and remission durability.

The combination of clinical efficacy, and yet relatively short-lived responses and known resistance mechanisms led us to hypothesize that a combinatorial approach could improve anti-leukemic activity against FLT3-ITD AML. One of the agents with which our lab has also worked extensively is the dual phosphoinositide 3-kinase (PI3K) and histone deacetylase (HDAC) inhibitor, CUDC-907 (fimepinostat).6 Critically, we have observed that CUDC-907 acts to down-regulate FLT36 – upregulation/over-expression of FLT3 being a potent resistance mechanism to gilteritinib. Resistance to CUDC-907 may be partially driven by increased JAK2/STAT5 signalling – a pathway which we have previously observed gilteritinib to inhibit.7 We therefore theorized that the combination of gilteritinib plus CUDC-907 would be more effective than either agent in isolation, as each drug appears to overcome a major mechanism by which AML cells may resist killing by either drug in isolation.

In our study, recently published in Blood Cancer Journal,8 we were able to confirm this hypothesis. In both FLT3-ITD AML cell lines and in primary patient samples, we found significantly improved cellular killing when using the combination therapy, compared to either alone. Excitingly, we also observed a significant prolongation in the survival of murine xenograft models. In vitro and in in vivo settings, using both AML cell lines and primary patient samples, we showed significant improvements in survival – and arguably, 60% of the mice in the combination therapy arm may have been cured of their leukemia. Moreover, the mechanisms by which this synergy occurred supported our hypothesis that each agent was essentially “blocking” resistance from occurring to the other drug.

The relevance of this study is enhanced by the favourable toxicity profiles of these two agents, and by the fact that both agents have already been evaluated or are currently being evaluated in patients; gilteritinib carries an existing FDA approval, and CUDC-907 currently holds a “fast-track” designation. Data such as ours presents a powerful rationale to further investigate this combination, and to translate these findings into the clinical setting. 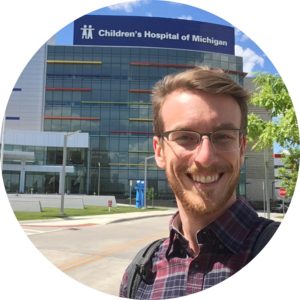